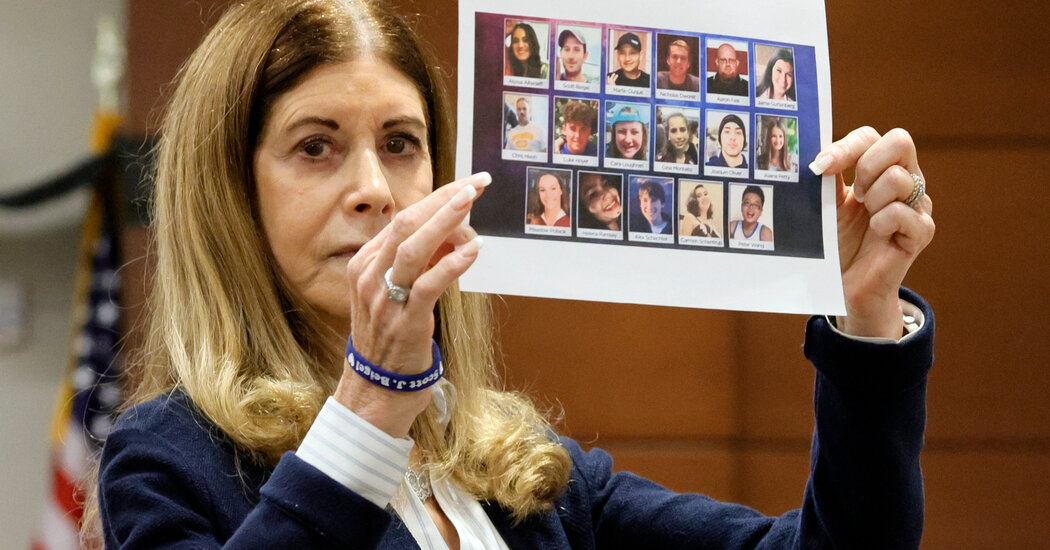 The gunman who killed 17 people at Marjory Stoneman Douglas High School was addressed directly by the families of his victims for the first time.

FORT LAUDERDALE, Fla. — Brimming with rage, disappointment and grief, relatives of the 17 people fatally shot at a Florida high school four years ago confronted the gunman at a charged two-day sentencing hearing in which they repeatedly denounced the criminal justice system for sparing his life.

For the first time since the 2018 mass shooting at Marjory Stoneman Douglas High School in Parkland, Fla., parents, siblings and children of the victims spoke directly to Nikolas Cruz, the 24-year-old gunman. Prosecutors had sought the death penalty, but last month, after an emotional three-month trial, a jury recommended a sentence of life in prison without the possibility of parole. The decision shocked victims’ families, who had endured the agonizing trial expecting that it would lead to capital punishment.

In remarks to the court, the families of victims wished Mr. Cruz a painful existence in prison and a painful death. Some discounted his defense lawyers’ arguments that his brain was damaged since birth by his biological mother’s drinking during pregnancy.

The speakers did not refer to him by name. And they offered no words of mercy.

“I hope your every breathing moment here on Earth is miserable,” Theresa Robinovitz, whose 14-year-old granddaughter, Alyssa Alhadeff, was killed, said on Tuesday, “and you repent for your sins and burn in hell.”

She stood behind a lectern facing Mr. Cruz, who sat next to his lawyers clad in a red inmate jumpsuit and a surgical mask, staring at each speaker. He did not address the court himself. He apologized in court last year when he pleaded guilty.

A life sentence, unlike a death sentence, means that Mr. Cruz will not return to court for any legal appeals. In a tacit acknowledgment of that finality, Debra Hixon, whose 49-year-old husband, Christopher Hixon, an athletic director at the school, was killed, told Mr. Cruz on Tuesday that she planned to never think of him again.

“After today, I don’t care what happens to you,” she said. “You’ll be a number, and, for me, you will cease to exist. You have taken enough from me and my family.”

A few of the speakers urged state lawmakers to no longer require a unanimous jury to impose capital punishment. Before 2016, Florida was one of only three states that allowed juries to recommend death with a simple 7-to-5 majority. That changed after a series of court rulings, including one by the United States Supreme Court and another by the Florida Supreme Court. The unanimity requirement was signed into law in 2017 by the governor at the time, Rick Scott, a Republican.

However, in 2020, the state’s high court, which had shifted to the right, said that a unanimous recommendation was no longer needed. Lawmakers made no changes to the law. Since last month’s life sentence for Mr. Cruz, however, Gov. Ron DeSantis, a Republican, has said he would like the Legislature to revisit the law.

Tony Montalto, whose 14-year-old daughter, Gina Montalto, was killed, urged lawmakers to allow a simple majority or a supermajority jury vote for death.

“This would be more fair to the victims,” he said.

Max Schachter, whose 14-year-old son, Alex Schachter, was killed, said he would also lobby for juries to be allowed to consider comments from victims’ relatives in their deliberations. Over four days during the trial, relatives spoke in deeply personal terms about how losing their loved ones shattered their lives. But the judge had to tell the jurors that those statements could not be considered as evidence in reaching their verdict.

“It’s not right,” Mr. Schachter said, “and I will work to fix this injustice for the next family.”

Many of the speakers indicated that the jury of seven men and five women had failed them. Interviews with jurors after they made their recommendation last month revealed that one said during the deliberations that she could not impose a death sentence on someone she considered to be mentally ill. Two other jurors also voted for life, resulting in a 9-3 vote in favor of the death penalty.

Melisa McNeill, the assistant public defender in charge of the case, objected, arguing that comments about jurors and defense lawyers and their families were out of line and that the Constitution affords a defense for the accused.

“I did my job, and every member of this team did our job, and we should not personally be attacked for that,” she said.

Later, Gordon Weekes, the chief public defender in Broward County, implored Judge Scherer to ask prosecutors and victims’ families to tamp down their rhetoric, alluding to the rash of political violence around the country.

That prompted a fiery response from one of the prosecutors and from the judge, who repeatedly clashed with defense lawyers throughout the trial.

Stacey Lippel, a teacher who was injured by Mr. Cruz during the rampage, told him the memory of him pointing his assault-style rifle at her would be “ingrained in my brain forever.”

Lori Alhadeff, whose daughter, Alyssa, was shot eight times, said on Wednesday that she would have taken the eight bullets herself to save her daughter’s life.

“She deserved so much more time here on Earth,” Ms. Alhadeff said, going on to describe seeing Alyssa’s body for the first time after it had been removed from the devastated scene of the crime.

“I tried to warm her body with my hand,” Ms. Alhadeff said. “She was so cold.”

EXCLUSIVE: Saweetie’s Dating Lil Child … We Got Pics To Verify IT!!