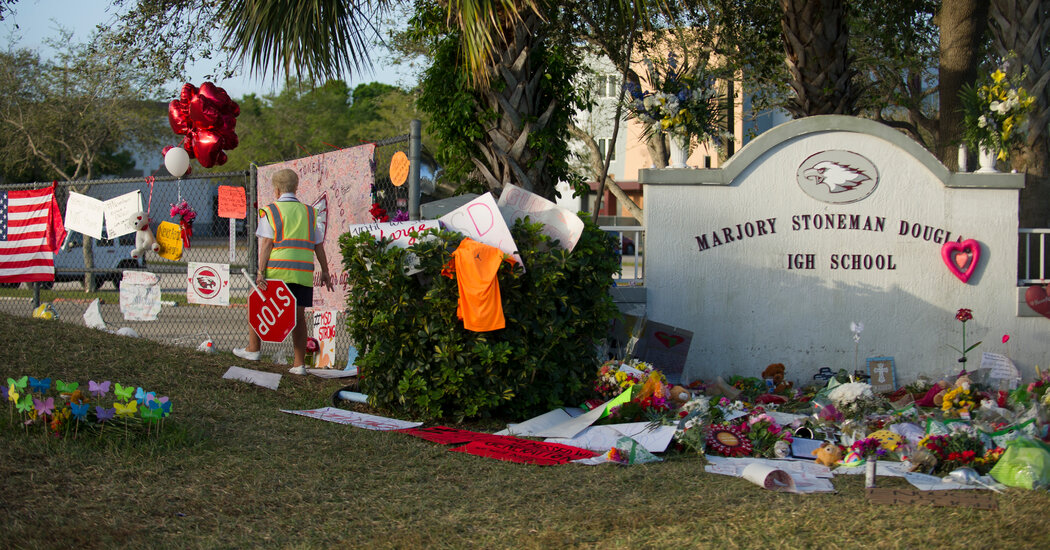 A Florida jury will decide if the young man who killed 17 people in 2018 will be sentenced to death.

FORT LAUDERDALE, Fla. — Seven weeks into one of the rarest of American legal proceedings — the trial of a surviving gunman in a school shooting — another horrifying mass murder at a school convulsed the nation.

The massacre in Uvalde, Texas, on May 24 reverberated in a courtroom more than 1,400 miles away, where lawyers were deep into selecting jurors to decide the fate of the young man who killed 17 people at Marjory Stoneman Douglas High School in Parkland, Fla., four years ago.

Lawyers for the gunman urged the judge to delay the trial. They argued that the inescapable news of more schoolchildren shot dead in classrooms would inflame potential jurors and that the shootings in Uvalde and in a supermarket in Buffalo, N.Y., had caused a national “wave of emotion.”

But the trial, a complicated and tense affair that had repeatedly been delayed because of the coronavirus pandemic, went on. On Monday, after nearly three months of jury selection, lawyers are scheduled to deliver opening statements, kicking off four to six months of testimony to determine if Nikolas Cruz, 23, who pleaded guilty in October, will be sentenced to death or life in prison without the possibility of parole.

A 12-member jury made up of people ranging from a bank vice president to a librarian will have to decide: What punishment does a mass shooter deserve?

For a country that has suffered through so many public massacres, the question is unusual. No other gunman who fatally shot so many people in a single attack in the modern era has ever faced trial, according to Robert M. Jarvis, a law professor at Nova Southeastern University in Davie, Fla., who has tracked such killings. The others died during their attacks, either by suicide or killed by the police.

“In a sense, we are in completely uncharted waters,” Mr. Jarvis said. “You never get these kinds of trials, because the gunman is always dead.”

A similar trial could take place in the next few years. The suspect accused of killing 23 people in a Walmart in El Paso, Texas, in 2019, has pleaded not guilty and is awaiting trial. The white supremacist who killed nine Black churchgoers in Charleston, S.C., in 2015, was sentenced to death in 2017.

Mr. Cruz’s lawyers said he was willing to plead guilty in exchange for a life sentence. But the chief prosecutor in Broward County at the time, Michael J. Satz, a Democrat, said he would pursue capital punishment, and the gunman ultimately entered a guilty plea regardless. Mr. Satz is no longer the elected state attorney but remains the lead prosecutor on the case.

A death sentence requires a unanimous decision; if a single juror disagrees, then by Florida law the judge will have to sentence Mr. Cruz to life.

Mr. Cruz, a former Stoneman Douglas High student, arrived at the school near dismissal time on Feb. 14, 2018, armed with a legally purchased semiautomatic rifle and more than 300 rounds of ammunition. He stormed the hallways of Building 12, also known as the freshman building, shooting into classrooms and targeting students who tried to run away or hide. In just under six minutes, he took the lives of 14 students and three faculty members.

The high-profile trial, which is expected to be televised and streamed online, comes as the number of executions in the United States has declined. The modern peak was in 1999, when 98 prisoners were killed. From 2012 to 2021, an average of 26 people were put to death each year, about half as many as were killed on average each year in the 10 years prior.

The Trump administration carried out 13 executions, the first time the federal government had executed anyone since 2003. President Biden issued a moratorium on executions but successfully fought to restore the death penalty for one of the Boston Marathon bombers.

A majority of Americans favor capital punishment, according to public opinion surveys, though that support has steadily declined since the 1990s. Several states have abolished the death penalty or issued moratoriums in recent years.

Florida has carried out 10 executions since 2015, but only two since Gov. Ron DeSantis, a Republican, took office in 2019. Florida has more inmates on death row — 306, according to the Department of Corrections — than any state but California.

If Mr. Cruz is sentenced to death, he would be one of the youngest people to receive the sentence in Florida in recent decades, though he would likely not be executed for many years as his lawyers filed appeals. Of the 1,427 people executed in the United States since 1990, only 12 have been 25 years old or younger.

Robert Dunham, the executive director of the Death Penalty Information Center, said that the Parkland massacre is impossible to compare with any other case but that some of the same issues that have made death sentence trials contentious will be at play.

In order to qualify for this trial, jurors, who will be tasked with determining whether to sentence someone to death, could not be universally opposed to capital punishment. Some argue that this is in line with requirements that jurors be willing to follow the law in the cases they are hearing, while others say that it makes juries less representative of a community’s views.

“You have individual jurors who are more likely to impose the death penalty than the community at large,” Mr. Dunham said.

The 12 jurors and 10 alternates in the Parkland case were selected from about 1,800 people. Finalists were asked questions on topics ranging from gun ownership to their ability to handle graphic images.

Broward, perhaps Florida’s most liberal county, might seem like an unlikely place for the government to seek a death sentence. But the Parkland tragedy touched people far and wide, and many of the victims’ families have said they support such a punishment.

Tony Montalto, whose 14-year-old daughter, Gina, was murdered at the school, said parents and other loved ones are preparing victim impact statements to deliver in court.

“I think as a society we should want people who commit these heinous acts — who attack the future of our country — to be punished to the fullest extent of law, for any deterrent effect that should have,” he said.

Prosecutors will present details of 17 murders and 17 attempted murders — for the people who were injured — including hundreds of gruesome photographs and videos that the judge will admit on a case-by-case basis. A jury tour of the school building where the shooting took place, which has sat unused since the day of the massacre, is also possible.

Former prosecutors say that evidence is intended to prove the aggravating factors that are required to warrant a death sentence. Those factors include especially brutal circumstances or evidence of premeditated murder.

“They’re going to try to get these jurors to relive what happened to the victims,” said David S. Weinstein, a former prosecutor who is now a defense lawyer. “It’s going to be an emotional roller coaster.”

As mitigating factors, the gunman’s lawyers intend to show that Mr. Cruz, who was 19 at the time of the shooting, struggled with a difficult upbringing and mental health problems and had tried to get treatment. They have requested permission to show jurors a map of his brain, but the judge has yet to decide whether to allow it.

Sarah Anne Mourer, a South Florida lawyer who has worked in death penalty defense, said that by presenting Mr. Cruz as a young person whose life was burdened by serious problems, the gunman’s lawyers will try to convince the jury that his life should be spared.

How to Calibrate Binoculars

J&K: Another terrorist killed during encounter with security forces

After Texas Sent Him to Washington, One Migrant Launches a New Life