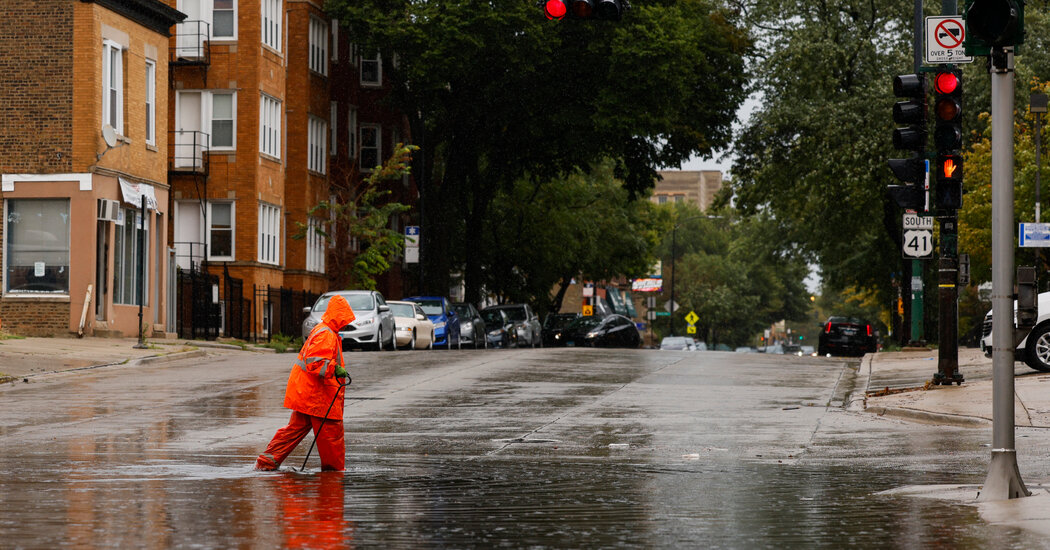 The extreme weather took the city by surprise, particularly the North Side of Chicago. Close to five inches of rain had fallen by late afternoon, according to Kevin Doom, a meteorologist for the National Weather Service.

“This has been a mess,” he said. “The water rose pretty quickly this morning, so it caught a lot of people off guard.”

At some intersections, cars were stranded in the rainwater after motorists drove through suddenly flooded roads. Homeowners whose basements had not seen water in years were unpleasantly surprised to discover that rainwater had surged up through drains, in some cases leaving an ankle-deep flood carrying a pungent smell of sewage. Grocery stores dealing with flooding closed their doors, and some businesses could not open at all.

To prevent more flooding, Mayor Lori Lightfoot advised Chicagoans not to run dishwashers or washing machines. She also said people should avoid swimming in Lake Michigan because of high waves and dangerous conditions.

Chicago is prone to flash flooding when its sewer system becomes inundated, but this storm placed unusual stress on the city, officials and residents said.

“What happened today was a really heavy downpour, really quickly, in a way that appeared to have overwhelmed some of the sewer infrastructure,” Andre Vasquez, an alderman who represents a ward on the North Side, said. “It’s a trend. We need to figure out how to adapt, planting more rain gardens and native species, having more green space that can absorb more of the runoff water.”

Rain was continuing throughout the later afternoon and evening, and was not expected to let up until Monday.

Michael Roper, owner of Hopleaf, a bar and restaurant in the Andersonville neighborhood on the North Side, said that he was forced to shut down the restaurant for lunch service on Sunday after the basement flooded during the first surge of rain.

“It’s been a rough day,” Mr. Roper said. In the morning, employees rushed into the restaurant — but instead of prepping for lunch, they grabbed mops and buckets to clean up.

In 30 years of running the restaurant, he said, this kind of flooding has forced a closure perhaps a half dozen times. He added that the city needed to update its infrastructure to respond to increased rainstorms, even though it has been spared the extreme weather seen in much of the country.

“Everything like this is extra exhausting right now,” he said. “Chicago is becoming a climate change destination. But things still happen. There’s tornadoes, here’s wind storms, there’s lightning. And there’s rain like today.”