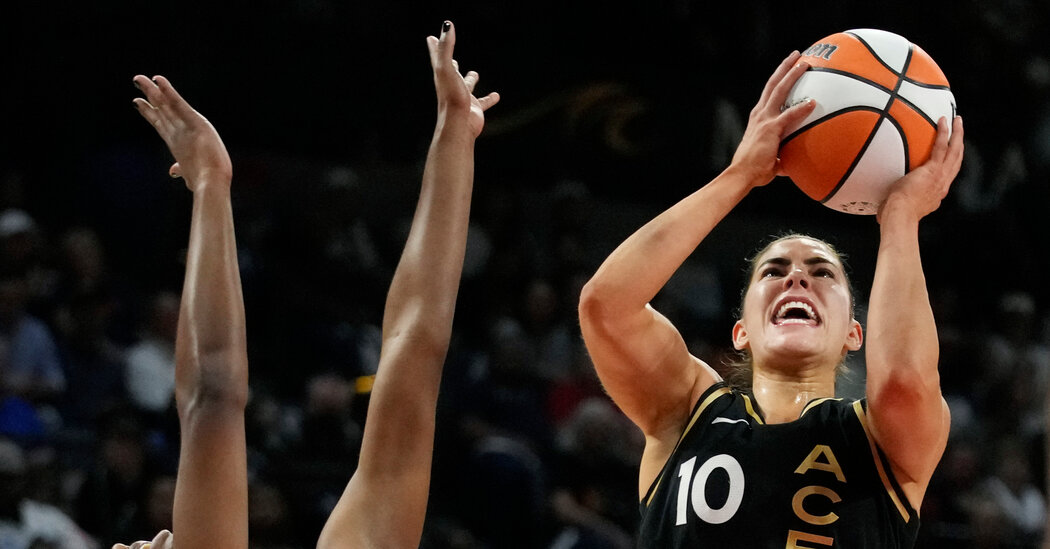 A scorer shakes off her struggles after a scolding, and helps Las Vegas take a 2-0 lead in the finals.

LAS VEGAS — A’ja Wilson approached her teammate Kelsey Plum with a simple message after their Las Vegas Aces narrowly won Game 1 of the W.N.B.A. finals: To win the series, Wilson made clear in a hail of shouts and expletives, the Aces need Plum to play better.

“We need her to make shots,” Wilson said. “And I know it sounds harsh, but K.P.’s a pro, and she went out there and took care of business.”

In Game 2 on Tuesday night, Plum responded to Wilson’s rebuke with arguably her best game of the playoffs, scoring 20 points and adding 7 assists in the Aces’ 85-71 win over the Connecticut Sun. The victory gave the Aces a 2-0 lead in the best-of-five finals, putting them in position to close out the series — and win their first W.N.B.A. title — in Game 3 on Thursday night in Connecticut.

Plum said Wilson’s diatribe was not the only message she had received in recent days, but she acknowledged all of the exhortations — however they were delivered — had made a difference.

“I got people trying to encourage me, I got people cussing me out,” Plum said. “But everyone wants to win, you know? So I really, actually, welcomed it very much.”

For anyone who watched the Aces play this season, the idea that Plum would need a scolding from a teammate to raise her game might seem strange. She was the Aces’ leading scorer in the regular season, averaging 20.2 points, and finished third in voting for the Most Valuable Player Award behind Wilson and Seattle Storm forward Breanna Stewart.

But the regular-season version of Plum had vanished for much of this playoffs, and she quickly became an afterthought behind the dominance of Wilson and Chelsea Gray. Scoring suddenly seemed to be a challenge for Plum, beginning in the Aces’ semifinal series against the Storm. She scored in double figures in each game of that series, but the points came inefficiently as she made only 38 percent of her shots.

The most startling element of Plum’s struggles was her inability to hit 3-point shots. Plum had established herself as one of the best long-distance shooters in the league in the regular season, making 42 percent of her 3s while attempting 7.5 per game. But since Game 1 of the semifinals, Plum had been abysmal from behind the 3-point line, making only 18 percent of her shots going into Tuesday’s game.

The dreadful stretch was unlike any Plum has had in her career. Her scoring ability in college was what had made her the No. 1 overall pick in the 2017 W.N.B.A. draft. She was one of the best players in women’s college basketball history at the University of Washington, where she set an N.C.A.A. record with 3,527 career points and averaged 31.7 points a game as a senior.

“I don’t remember a period where I ever felt like she was in a slump,” Mike Neighbors, her coach at Washington, said before Tuesday’s game. “She’s like no other human being I’ve ever been around. She developed this ability to focus more than anybody I’ve ever seen.”

On Tuesday night, that focus took the form of Plum’s attacking the basket fearlessly. Her 3-point shooting woes continued (she shot 1 of 6 on 3s), but she masked that by attacking the Sun’s physical and tall frontcourt for layup after layup, repeatedly contorting her 5-foot-8 body around bigger defenders like Jonquel Jones (6-foot-6), DeWanna Bonner (6-foot-4), Brionna Jones (6-foot-3), and Alyssa Thomas (6-foot-2).

Plum’s most impressive finish came with just over four minutes left in the third quarter, when she finished a drive around the outstretched arms of Bonner while drawing a foul.

The play drew roars from the Aces’ white-knuckled fans, and when she made the free throw Las Vegas had an 8-point lead. Wilson, who led all scorers with 26 points and also grabbed 10 rebounds, followed with a jumper to extend the advantage to 10, and by the end of the quarter the Aces’ lead had grown to 14. They never looked back.

“I’ve been a little bit, you know, frustrated with how I’ve performed throughout the whole playoffs,” Plum said, “so I’m just glad that they’ve been carrying it, and I decided to join the party.”

The Suns’ length and physicality, which had flustered the Aces in Game 1 on Sunday, proved ineffective on Tuesday night. Missing, too, was the excitement the Sun had been oozing after their narrow loss that night, a matchup that Jonquel Jones, who led her team with 16 points and 11 rebounds on Tuesday, had said was “our game for the taking.”

“They were just extremely aggressive,” Jones said of the Aces after Game 2, though she might have been describing Plum specifically.

It was that version of Plum that Wilson had hoped to bring out with her message after Game 1. It is also the version the Aces still will need to close out the series.

Jeff Bezos to step down as Amazon CEO later this year

With Federal Aid on the Table, Utilities Shift to Embrace Climate Goals

Italy to vaccinate its athletes for Tokyo Olympics