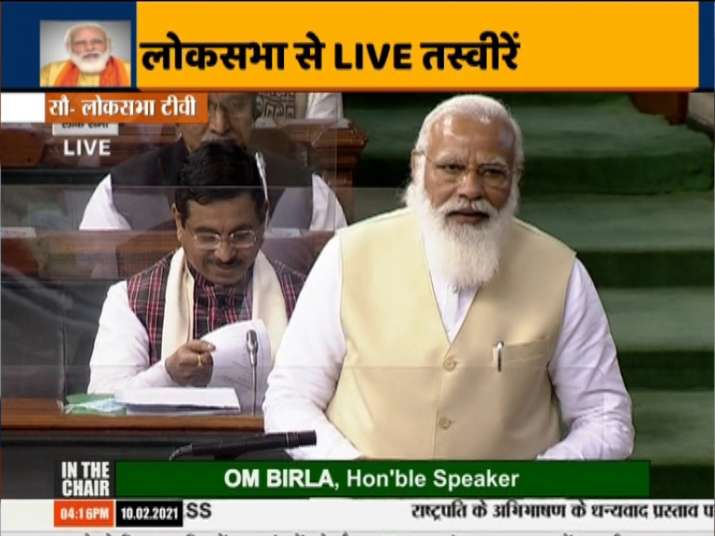 “I consider the Kisan Andolan to be Pavitra. But, when Andolanjeevis hijack Pavitra Andolans, showcase photos of those jailed for serious offences, does it serve any purpose? Not allowing toll plazas to work, destroying telecom towers- does it serve a Pavitra Andolan,” the prime minister said in the lower house.

“There are people who talk the right things. But this same section, when it comes to doing the right things, fail to convert words into action. Those who talk big on electoral reforms oppose One Nation One Election. They speak of gender justice but oppose Triple Talaq,” he added.

During his address, the prime minister took a sharp dig at the Congress and said its Rajya Sabha and Lok Sabha units move in opposite directions. He asserted that such a “divided” and “confused” party can neither do any good for itself nor can it think of any solutions for the country’s problems. PM Modi’s remarks came amid a walkout by members of the Congress in Lok Sabha, including former party chief Rahul Gandhi, when he was speaking on the three farm laws during his reply to the debate on the motion of thanks to the President for his address.

“The condition of the Congress party, a very old party which ruled the country for about six decades, has now become such that its Rajya Sabha unit moves in one direction while the Lok Sabha unit moves in another direction”. Such a “divided” and “confused” party can neither do any good for itself nor can it think of any solution to the country’s problems, Modi said.

“Nothing can be more unfortunate than this. The Congress is also there in Rajya Sabha, their senior leaders are there, they debate with a lot of enthusiasm and express their views. On the other hand, there is the other section of the Congress (in Lok Sabha)….Time will tell,” the prime minister said.