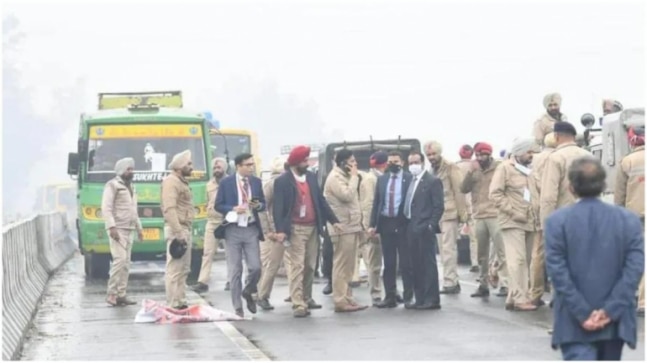 The Punjab government has sent a report to the Ministry of House Affairs (MHA) on the security breach throughout Prime Minister Narendra Modi’s visit to Ferozepur. In the report, the Bathinda senior superintendent of cops (SSP) has blamed his Ferozepur equivalent for the lapse in the security of PM Modi.

Bathinda Senior Superintendent of Police Ajay Maluja and the 5 other officers were responsible for the prime minister’s security throughout his visit to Punjab on January 5.

Maluja was issued a show-cause notice by the MHA on Friday.

In the Punjab government’s report to the MHA, Maluja claimed that he provided safe passage to the PM’s convoy till his jurisdiction and blamed Ferozepur SSP Harman Hans for the lapse in security.

They had actually been asked to clear the path near the flyover on which the cavalcade was stuck for nearly 20 minutes, but the protesters believed the SSP was lying(about the convoy’s path ).

The report also shared the sequence of events resulting in the incident and declared that the farmers’ protest was ‘sudden ‘.

An FIR has been filed in the matter and a two-member panel set up, the report states.

On Wednesday, Prime Minister Narendra Modi’s convoy was stuck on a flyover in Punjab for nearly 20 minutes due to the fact that of a protest by the farmers.

The cavalcade was stuck and personal cars were seen approaching, which was a significant security breach. PM Modi returned to the airport in Bathinda since of the lapse.

READ more...  62% of people believe this: politics in the name of Sushant