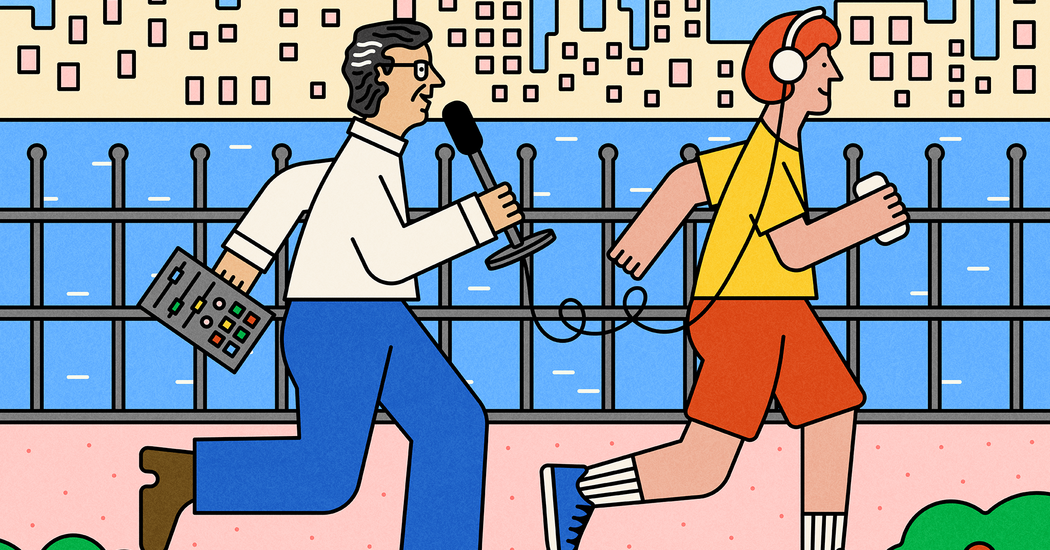 Try out a new podcast or two, courtesy of Morning readers.

What makes a good podcast? I’ve been mulling this question over the past few weeks since I asked readers of The Morning to recommend their favorites.

For me, a good podcast is one that makes any drive too short, that renders a middle-seat flight bearable. A good podcast dims the drudgery of folding laundry or preparing dinner, and turns waiting in line at the post office into something fun.

I’ll listen to any type of podcast as long as it’s diverting — an interview, a historical recapitulation, a true-crime saga, two pals gabbing. I have a friend who won’t listen to any podcasts that don’t teach her something, another who can’t stand the “normal people who find themselves hilarious, shooting the breeze” style.

Readers sent in hundreds of suggestions, many that I hadn’t heard of. Like “Back from Broken,” a podcast about addiction and recovery from Colorado Public Radio, which kept Wynn Jones of Mancos, Colo., company on a cross-country road trip. And “That’s What They Say,” about language, which Steven Hunter of Chicago billed as “possibly the nerdiest podcast out there.”

Here are a bunch more to check out:

“Looking for Esther.” A Scottish woman searches for her birth mother. “As narrator, she radiates hope, honesty and vulnerability in a way that really touched me,” César González from San Juan, P.R., wrote.

“Everything Is Alive.” Interviews with inanimate objects. “The perspectives and stories you get from these objects (voice actors portraying a bar of soap, a lamp post, a subway seat, etc.) are hilarious, thought-provoking and wholesome,” Dana Nelson in Eugene, Ore., wrote. “Perfect for a spring-cleaning weekend — episodes are about 20 minutes long, and so uplifting.”

“I Was Never There.” “A combination true-crime story, cultural history of a West Virginia commune in the 1970s and ’80s and a compelling mother-daughter story,” Pamela Gray in Santa Barbara, Calif., wrote.

“It’s a Clue.” Two sisters chat about Nancy Drew, Encyclopedia Brown and other sleuths from their favorite childhood mysteries. “It just makes me smile,” Jeanette Guinn in Columbia, S.C., wrote. “In the midst of Covid, remembering a simpler time was a balm.”

“Chameleon: Hollywood Con Queen.” The search for a movie-industry scammer. “I couldn’t stop listening,” Naga Nataka from Pahoa, Hawaii, wrote. “The pacing, the way people are woven in, the central mystery that drives the narrative. A couple of times, I thought, ‘Wait a minute, is this all some kind of mockumentary metanarrative gotcha?’ It was that weird.”

“Fly on the Wall.” David Spade and Dana Carvey interview former cast members, hosts, writers and others from “Saturday Night Live.” “It’s hilarious and also really fun to hear the stories of working on SNL,” Karen Gibson in Los Angeles wrote. “So many great impersonations and jokes woven in — I am laughing out loud quite a bit while listening.”

“My Unsung Hero.” Michael Vujovich from Washington, Ill., said it makes him feel good about himself and the world around him. “I always end up smiling, crying or both, but in all the best ways.” If that doesn’t tempt you, check out the show’s official description: “Each episode reveals what the news ignores: everyday acts of kindness and courage that transformed someone’s life.” Sold.

I noticed a theme running through these recommendations: podcasts that offer a break, that make people smile or feel relief. I’d love to hear about the music that does just that for you. What song just makes you feel better lately? Tell me about it. Include your name and location, and we may feature your submission in an upcoming installment of The Morning.

THE WEEK IN CULTURE

🍿 “Bullet Train” (Friday): I always enjoy Brad Pitt in goofball mode, as he appears to be in this colorful movie about a group of assassins (including Brian Tyree Henry, Aaron Taylor-Johnson and Joey King) aboard a Japanese high-speed train. This one is directed by the stuntman-turned-director David Leitch, whose work on “John Wick” and “Atomic Blonde” shows off his facility with down and dirty hand-to-hand action. Also, Bad Bunny shows up. Benito!

📺 “Reservation Dogs” (Wednesday): This wonderful FX comedy, whose second season premieres this month, follows four Indigenous teenagers on an Oklahoma reservation. Cocreated by Sterlin Harjo and the near-ubiquitous Taika Waititi (“Thor: Love and Thunder,” “What We Do in the Shadows,” “Our Flag Means Death”), it was on our chief TV critic’s best of 2021 list. He knows of which he speaks.

🎧 “Renaissance” (out now): Last week, I mentioned the new Beyoncé album. And I’m doing it again! It will be one of the biggest topics of conversation this weekend, next week, this month. And given that it’s full of “generally upbeat songs” that reference “disco, funk, house, techno, bounce and more,” as our pop music reporters write, it might own the rest of the summer.

RECIPE OF THE WEEK

Is there ever a bad time to bake a batch of Jacques Torres’s classic chocolate chip cookies? Even in the height of summer, they’re the ideal chewy cookie, with bittersweet chocolate chunks making melt-y puddles in the brown sugar dough and a sprinkling of crunchy sea salt on top. Mr. Torres likes to make the dough a day ahead so the flavors can meld. But I’ve baked them immediately after mixing, and they are nearly as good — still the best chocolate chip cookies I’ve ever made. I like to keep balls of the dough in my freezer, perfect for popping in the oven (or toaster oven) whenever a craving hits. If you don’t have both cake flour and bread flour on hand, you can just use all-purpose; they’ll end up slightly less chewy but just as deeply chocolate-y.

A selection of New York Times recipes is available to all readers. Please consider a Cooking subscription for full access.

The hunt: She wanted to spend her golden years in California. Which home did she choose? Play our game.

A form of self-care: Women are finding empowerment in real estate investing.

Full time at the beach: A New Yorker was drawn to the unusual architecture of a Fire Island home.

What’s new in Prague: The city is coming out of the pandemic with a youthful vibrancy.

Bring a knife: How to cook in a vacation rental.

Navigating young adulthood: How to deal with a quarter-life crisis.

‘Medical gaslighting’: Advocate for yourself when you’re feeling ignored at the doctor’s office.

Make room: Airport lounges are for everybody now.

GAME OF THE WEEKEND

England vs. Germany, Euro 2022 women’s final: England’s tradition of international soccer misery includes the women’s team, which has made the semifinals of its past three major tournaments — two World Cups and the last Euro Cup — but has never won. In this year’s semifinal, though, not only did England win but also had fun doing so. (Exhibit A: this back-heel goal by Alessia Russo.) Germany, England’s opponent in the final, has won the tournament eight times. Sunday at noon, ESPN.

The pangram from yesterday’s Spelling Bee was pageboy. Here is today’s puzzle.

Take the news quiz to see how well you followed this week’s headlines.

Here’s today’s Wordle. After, use our bot to get better.

Thanks for spending part of your weekend with The Times. — Melissa

IPL 2021: Partnership with Kohli managed to get better to strike boundaries in challenging...

TimesNewsNow provides Real, Raw, Authentic/verified news in this industry and we’re growing pretty quickly to achieve our Target with you. The latest updates, Trending Topics, Internal News, are some of our specialties. We are registered with the GOI as TNN Media Network (Timesnewsnow.com and all its subdomains), Also registered in London, UK.
Contact us: i[email protected]