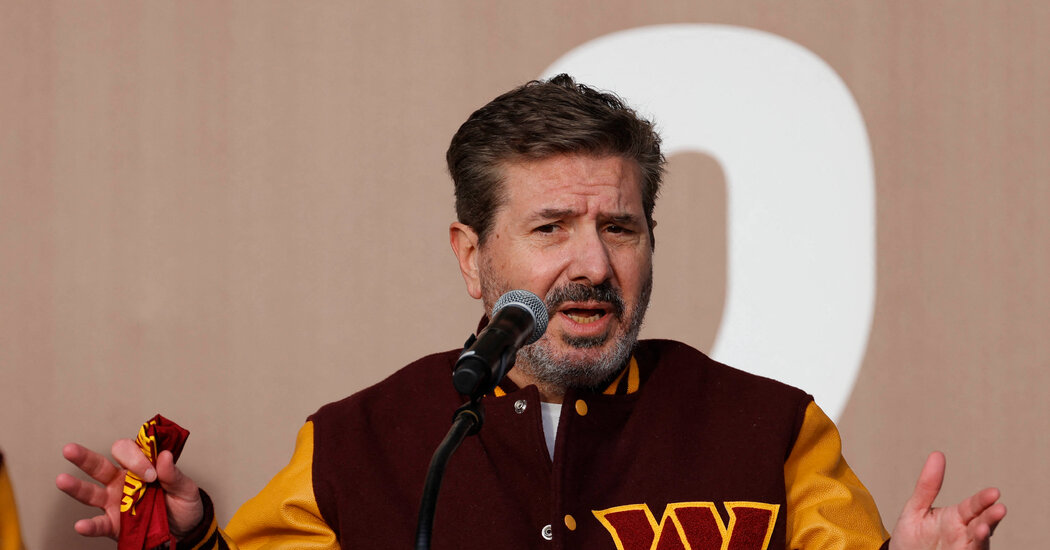 The owner of the Washington Commanders has survived numerous allegations in the image-conscious N.F.L.

By now, this is a familiar story: A powerful Washington denizen scrambles to hold onto his position while facing misconduct accusations. The institution I want to tell you about today, though, is not Capitol Hill or the White House, but the N.F.L. The person: Daniel Snyder, owner of the Washington Commanders.

Snyder faces allegations of malfeasance, some direct and others under his watch, that are as varied as they are extensive: sexual harassment, racism, witness intimidation, financial malpractice and office dysfunction. The latest round came when ESPN reported last week that Snyder had told people that he had accumulated dirt on other team owners and league personnel.

The saga has significance beyond sports. In a league that is one of America’s most popular cultural institutions, now pulling in about $18 billion in annual revenue, Snyder is one of just 32 team owners who have deep influence over how the N.F.L. conducts itself. So his case is a lesson in how elite figures exercise power, particularly to advance their own agendas.

With each revelation, fans and critics have called on the N.F.L. to step in and make a change. I’ve covered the league for 15 years, and in today’s newsletter, I’ll explain how Snyder has remained in control of the team. (The answer has nothing to do with football success — Washington, a storied franchise that won three Super Bowls in the ’80s and ’90s, has rarely been competitive since. The team is 2-4 this season and last in its division.)

Snyder has denied wrongdoing, and the team asserts that it has transformed its culture, while pointing to an earlier business dispute as the source of its problems. “For over two years there has been an active and well-funded campaign to spread false and malicious stories and accuse Dan Snyder of things that never actually happened in an effort to coerce the Snyders to sell their team,” a Commanders representative said in a statement.

N.F.L. team owners will convene in New York today for a quarterly meeting, where they will almost certainly discuss Snyder, at least informally.

Snyder has owned the team since 1999, but in recent years his grasp has become more tenuous. As he has resolved some complaints, others have emerged. The image of a mismanaged organization has persisted. The allegations include:

The allegations against Snyder have prompted recurring negative headlines for the N.F.L., which is a deeply image-conscious organization.

Snyder has shown no signs of selling the team. Can the league force his hand? Removing Snyder would require a vote by 24 of the league’s 32 clubs, generally a high bar to clear. Some owners are awaiting the results of the ongoing investigations, yet they are also mindful that Snyder has been unable to secure government subsidies to help him build a new stadium. Local lawmakers have cited the turmoil at the club as a reason for backing away from a deal.

You may be wondering: Could a stadium really matter more than accusations of misconduct? That priority for some owners reveals a cynical reality of the N.F.L.: Most everything comes down to money.

Related: The N.F.L. has dealt with many off-field crises. Here’s how it stays popular.

Britain’s Liz Truss may limp on, but her prime ministership is finished, Tanya Gold writes.

She sought a tax break for her reindeer-herding dog. The Swedish government’s treatment of Indigenous cultures stood in her way, Maria Fredriksson argues.

Fantasy and science fiction let us explore the differences among people, N.K. Jemisin argues on “The Ezra Klein Show.”

“Completely ignored”: Half the world has a clitoris. Why don’t doctors study it?

Well: A guide to hearing aids, which are now available over the counter.

“Shut it down!” A Washington Post critic pans the new restaurant from Jon Taffer of “Bar Rescue.”

Advice from Wirecutter: Get toasty with flannel sheets.

Yankees and Guardians rained out: Inclement weather in New York forced the decisive Game 5 of the A.L.D.S. to shift to today.

Chargers limp to win: Dustin Hopkins nailed a 39-yard field goal in overtime, despite clearly being injured, to give Los Angeles a 19-16 win against the Broncos.

N.B.A. starts tonight: The Sixers and Celtics open the season after months of league drama. Here are season predictions from The Athletic and a team-by-team preview from The Times.

Diwali, the South Asian festival of lights, is prime time for mithai, or sweets. At Brij Mohan Indian Sweets and Restaurant in Sharonville, Ohio, cooks work from morning till night for the holiday. “We don’t close for three days,” said Saakhi Grover, an assistant manager.

In The Times, Priya Krishna profiles five shops — each serving a U.S. metro area with a growing South Asian community — that make mithai by hand. From spongy rasgula and deep-fried kaja to colorful burfi topped with edible silver foil, the photos are mouthwatering.

Pair these Indian corn pakoras with a flavorful mango-tamarind chutney (and here are more Diwali recipes).

Dwayne Johnson plays a lot of muscular good guys. In “Black Adam,” he’s ready to be an antihero.

Ralph Macchio’s memoir explores how playing Daniel LaRusso in “The Karate Kid” has shaped his life.

The pangram from yesterday’s Spelling Bee was touched. Here is today’s puzzle.

P.S. Slate’s Lowen Liu is joining The Times as The Upshot’s deputy editor.

“The Daily” is about housing in Florida.

Amit Panghal settles for bronze at Governor's Cup in Russia