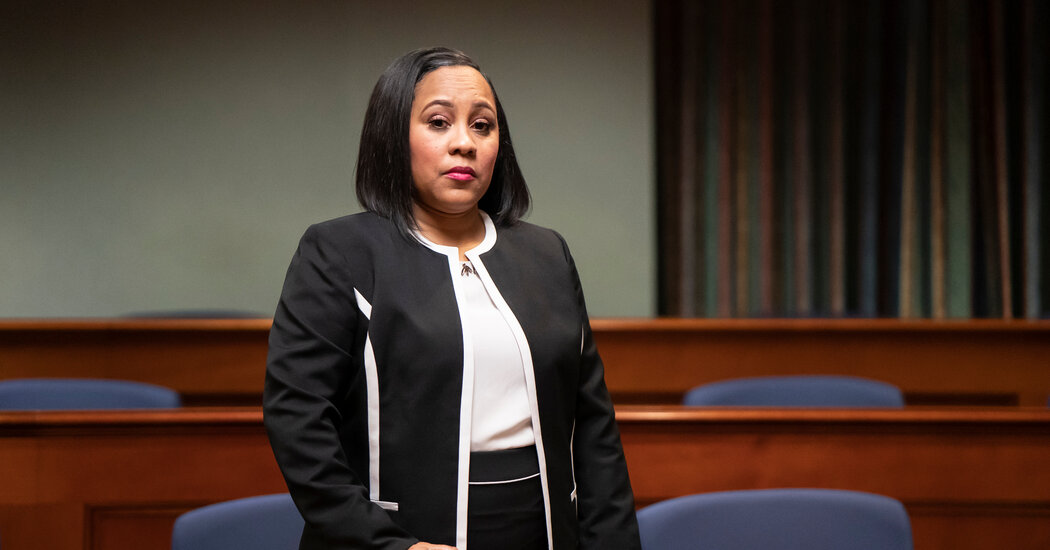 A judge in Atlanta cited a conflict of interest on the part of Fani T. Willis. Her broader investigation into election meddling will continue.

ATLANTA — In an embarrassing blow to the prosecutor investigating election interference by former President Donald J. Trump and his allies, an Atlanta judge has disqualified District Attorney Fani T. Willis of Fulton County from developing a criminal case against one Georgia state official, citing a conflict of interest.

Ms. Willis had recently notified state Senator Burt Jones, Georgia’s Republican candidate for lieutenant governor, that he could face indictment. But on Monday Fulton County Superior Court Judge Robert C.I. McBurney disqualified her from pursuing a case against Mr. Jones because she had headlined a June fund-raiser for his Democratic rival in the race.

Mr. Jones was one of 16 pro-Trump “alternate electors” in Georgia who were sworn in on the same day as the state’s legitimate presidential electors, who cast their votes for Joseph R. Biden Jr. Ms. Willis’s office had recently warned them, as well as another state senator and the head of the Georgia Republican Party, that they could face charges in the matter.

The ruling on Monday does not affect any other portion of the sprawling investigation that Ms. Willis’s office is conducting with a special-purpose grand jury. Even so, it underscores the complicated political terrain that lies before Ms. Willis, a first-term Democrat.

“She has bestowed her office’s imprimatur upon Senator Jones’s opponent,” Judge McBurney wrote in his decision, adding that “this scenario creates a plain — and actual and untenable — conflict. Any decision the District Attorney makes about Senator Jones in connection with the grand jury investigation is necessarily infected by it.”

The ruling does not mean that Mr. Jones cannot be investigated, only that Ms. Willis cannot be the one to do it.

The judge said it would be left to the state’s attorney general, Chris Carr, a Republican, to select a different district attorney who could evaluate whether any potential charges should be brought against Mr. Jones, and if so, what they would be. But Mr. Carr’s office said that under a new law, the choice of a prosecutor will actually be made by the Prosecuting Attorneys’ Council of Georgia, a group that sets policies and rules for district attorneys around the state.

Ms. Willis’s lawyer had argued that the fund-raiser she headlined for Charlie Bailey, the Democratic candidate for lieutenant governor, took place during a primary runoff between two Democratic candidates, and that a mailer for the event clearly showed it was related to the runoff, not the general election contest against Mr. Jones.

The judge acknowledged that those facts were “rightly” pointed out, but he said what was “more relevant — and harmful — to the integrity of the grand jury investigation is that the die was already cast on the other side of the political divide,” and that whoever won the runoff “would face Senator Jones.”

The ruling came a few days after Judge McBurney criticized Ms. Willis in a hearing last week for her participation in the fund-raiser, calling it a “what-are-you-thinking moment.” The judge also expressed concern that the district attorney, as “the legal adviser to the grand jury,” was “on national media almost nightly talking about this investigation.”

The judge’s ruling concerning Mr. Jones is likely to have limited repercussions for Ms. Willis’s broader investigation, since the ruling concerns only one of the 16 pro-Trump purported electors.

A spokesperson for the District Attorney’s office was not available to comment on Monday.

The Georgia investigation is gaining increasing attention as it engulfs more of Mr. Trump’s allies and advisers. Mr. Trump’s personal lawyer, the former New York City mayor Rudolph W. Giuliani, has been ordered by a judge to testify on Aug. 9. Lawyers for Senator Lindsey Graham of South Carolina are fighting efforts to compel him to testify, as are lawyers for Representative Jody Hice of Georgia, a stalwart Trump ally who led efforts in the House in January 2021 to stop the certification of electoral votes.

Ms. Willis is also seeking to compel testimony from John Eastman, an architect of the legal strategy intended to keep Mr. Trump in power, as well as other lawyers — Kenneth Chesebro, Jacki Pick Deason, Jenna Ellis and Cleta Mitchell — who played important roles in the effort.

Eleven of the other pro-Trump purported electors in Georgia asked the Judge McBurney to have Ms. Willis disqualified from investigating them as well, but the judge denied their motion, saying that none of them had shown that Ms. Willis’s office was “impaired by a conflict of interest” in their cases. The judge also denied their effort to quash the subpoenas they received.

The pro-Trump purported electors are slated to appear later this week before the special grand jury, which is meeting behind closed doors in a downtown Atlanta courthouse.

The fact that Mr. Jones could face indictment has injected a measure of drama into the lieutenant governor’s race in Georgia, one of several races that are being closely watched nationwide in the battleground Southern state. Mr. Bailey, a lawyer who formerly worked with Ms. Willis in the district attorney’s office, has accused Mr. Jones of participating in a “failed attempted overthrow of the American Government.”

Mr. Jones said in a statement on Monday that the judge’s ruling was a “huge win” for him, and accused Mr. Bailey of running a “smear campaign.”

Vikrant Massey tests positive for COVID-19, urges people to step out of their homes...

Parineeti Chopra appeals to Zomato to find out the ‘truth,’ supports delivery man