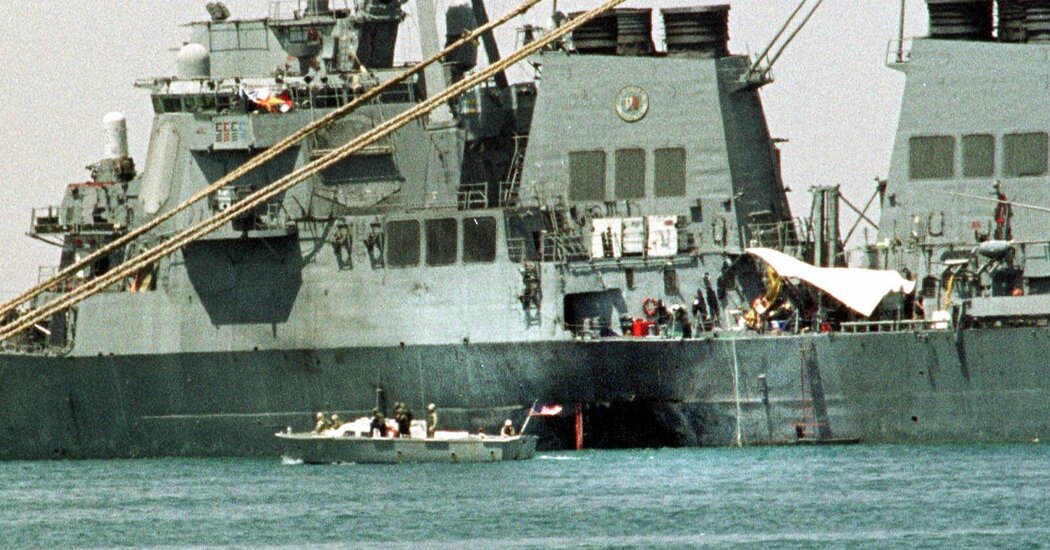 The Biden administration had adopted a policy excluding all evidence obtained through torture; the prosecutor argued the law allowed it.

GUANTÁNAMO BAY, Cuba — A federal prosecutor in the U.S.S. Cole bombing trial who advocated the use of evidence derived from torture, despite a Biden administration policy, has left the case.

Defense lawyers said they were notified on Wednesday, hours before a conference with the trial judge, that the new chief prosecutor for military commissions had replaced the long-serving lead case prosecutor, Mark A. Miller.

Mr. Miller, an assistant U.S. attorney from Louisiana, had been assigned to the death-penalty prosecution of Abd al-Rahim al-Nashiri since 2015. Mr. Nashiri is accused of being the mastermind of the bombing of the Cole off Yemen in October 2000, which killed 17 U.S. sailors.

No trial date has been set for Mr. Nashiri, who was charged in 2011. It is not known if the personnel change would slow the case, which has been delayed by higher-court challenges, conflict of interest issues, the coronavirus pandemic and protracted hearings over evidence.

Mr. Nashiri, who was held by the C.I.A. from 2002 to 2006, was waterboarded, deprived of sleep, forced to contort in painful positions and threatened with a drill and handgun. Some evidence against him was obtained through the abuse of other detainees, court testimony has shown.

The chief prosecutor, Rear Adm. Aaron C. Rugh of the Navy, declined to discuss the personnel decision, invoking limitations on media contacts imposed by higher authorities. He has been in the job since June. Mr. Miller could not be reached for comment.

The law governing the military commissions at Guantánamo Bay forbids the use of evidence obtained from a defendant through torture or cruel, inhuman or degrading treatment.

But at a hearing in May, Mr. Miller argued that evidence from anyone other than the defendant that was obtained through torture was legally admissible at trial.

He was referring to statements that another prisoner, Ahmed Muhammed Haza al-Darbi, made about Mr. Nashiri in 2002. Mr. Darbi spoke to interrogators that year in Bagram, Afghanistan, after U.S. soldiers kept him hooded and nude, deprived him of sleep and made him clean up human waste with his bare hands.

Mr. Miller argued that what happened to Mr. Darbi did not meet the legal definition of torture. Even if it did, he said, the prisoner’s statements to F.B.I. interrogators were admissible at the judge’s discretion under military commissions law.

Justice Department lawyers disavowed that position in higher-court proceedings, saying that a Biden administration policy excluded the use of evidence in the case that was derived through torture.

The judge, Col. Lanny J. Acosta Jr., later rejected the use of what Mr. Darbi told his interrogators in 2002 from the trial. “Permitting admission of such evidence might greatly undermine the actual and apparent fairness of the criminal proceeding against an accused by infecting a trial with unfairness sufficient to make any resulting conviction a denial of due process,” he wrote in June.

The judge left open the possibility that evidence investigators had obtained based on things they learned in those interrogation could be used at trial.

A dispute over the use of statements obtained through torture first emerged in the Cole case during the last months of the Trump administration, when prosecutors submitted a legal filing containing information Mr. Nashiri had told C.I.A. interrogators at a black site. Defense lawyers asked the judge to reject the filing, saying the secret court record made clear that Mr. Nashiri made the statements while being tortured.

Instead, Colonel Acosta ruled that in certain circumstances, a judge, but not a military jury, could consider evidence obtained through cruel, inhuman or even torture tactics. The Biden administration refused to defend that position and declared as policy that no evidence derived from torture would be used in the Guantánamo trials.

Priyanka Chopra Jonas opens up about her ‘spiritual foundation’ to Oprah Winfrey; I believe...

Tejashwi took a dig at Nitish at the Nawada rally, said – at that...