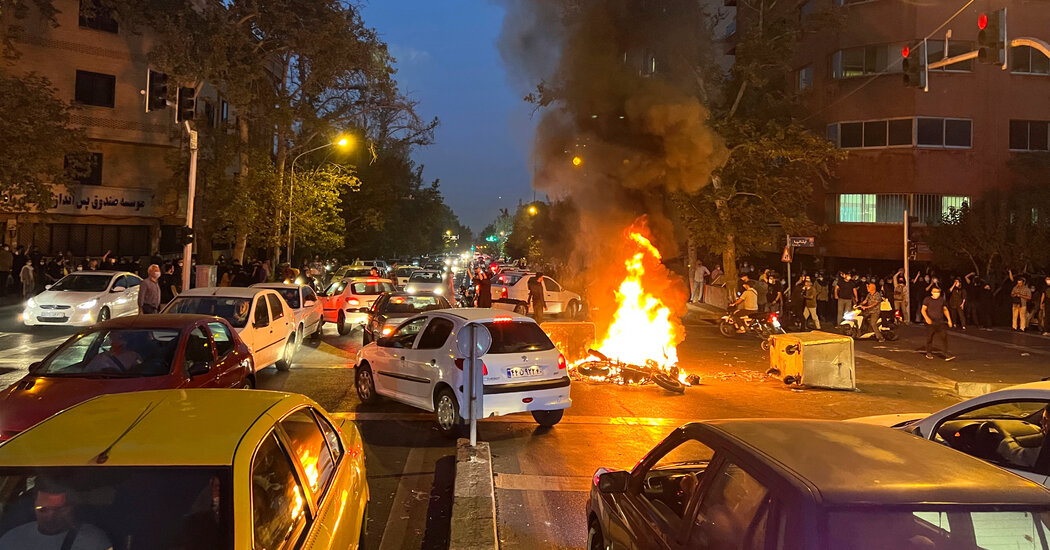 The 22-year-old’s death sparked outrage across social, religious and political factions. Four people were reported to have been killed by the security forces.

Antigovernment protests erupted in cities across Iran on Monday in response to a young woman’s death in the custody of the country’s morality police, with security forces firing on crowds in the northwest and killing four men, according to three Iran-focused human rights organizations.

The demonstrations, led mostly by women, broke out in more than a dozen cities and on university campuses in Tehran. They were prompted by the death on Friday of Mahsa Amini, 22, who had been arrested three days earlier in Tehran for allegedly violating Iran’s hijab law, which requires women to cover their hair and wear loosefitting robes.

Women protesting on Monday took their head scarves off and waved them in defiance. In Tehran, men and women chanted “we will fight and take our country back,” including students on campuses where fear of arrests, which can lead to a lifetime ban from higher education, has kept a lid on dissent for at least a year.

Security forces in the capital fired gunshots and water cannons, chased protesters and beat them with batons, according to videos shared on social media by Iranian journalists.

In Ms. Amini’s home province in the northwest, Kurdistan, where protests have been brewing since her funeral on Saturday, four men in three cities were shot and killed, said the Kurdistan Human Rights Group, which posted their names and photos online. Eighty-five other people were injured, including three children, and 200 were arrested, according to the rights group.

In at least a dozen cities in Kurdistan Province, most shops closed after opposition Kurdish political groups issued a joint call for strikes, rights groups said.

“We are witnessing a nationwide reaction, really like a George Floyd moment for the national conscience that can no longer bear the violence and the logic of the ruling class in killing ordinary citizens,” said Hadi Ghaemi, the executive director of the Center for Human Rights in Iran, a New York-based advocacy group.

Like previous waves of nationwide protests in Iran, the demonstrations were set off by a specific event — Ms. Amini’s death — but quickly broadened to take up a long litany of grievances, with crowds calling for an end to the Islamic Republic, according to videos shared by Iranian journalists.

The protests reflected the built-up frustration of many Iranians struggling under oppressive rules and economic hardship, with little hope of meaningful change. In the past, such widespread antigovernment unrest has been crushed, with large deployments of security forces killing, injuring and arresting protesters.

Ms. Amini’s death sparked outrage across social, religious and political factions. Even senior clerics and other supporters of the government called for the abolition of the morality police and condemned the government for deploying violence as a means of enforcing religious rules.

The morality police have said that Ms. Amini died from a heart attack, denying accusations that she had suffered blows to the head while being taken to a detention facility in a van.

Ms. Amini’s family members have told news outlets that she was perfectly healthy; that security officials had not shared her autopsy report with them; and that officials had pressured the family to bury her in the middle of the night and to stay quiet about her death.

Many of the demonstrations on Monday targeted the heart of the regime: the supreme leader, Ayatollah Ali Khamenei. Protesters chanted for his death and the downfall of his son Mojtaba, seen as a potential successor, according to videos posted on social media and on BBC’s Persian news service.

In the northern city of Rasht, protesters took over a street, chanting “death to the dictator” and “death to the oppressor, be it the shah or the supreme leader.” Several women ripped off and burned their head coverings to protest the hijab law, videos posted to social media and BBC Persian showed. Police forces responded by firing tear gas.

Mr. Khamenei has been ill in recent weeks, according to people familiar with his condition. He made an appearance at his residential compound on Saturday for a religious ceremony, but spoke only briefly, in a hushed and shaky voice.

Iranian media reported that President Ebrahim Raisi had ordered an investigation into Ms. Amini’s death and had called her father to offer condolences. Mr. Raisi arrived in New York on Monday for the annual gathering of world leaders at the United Nations, where he is scheduled to deliver a speech on Wednesday.

On Twitter, Secretary of State Antony J. Blinken called on Iran to “end its systemic persecution of women and to allow peaceful protest,” adding that the United States mourned Ms. Amini along with the Iranian people.

Grand Ayatollah Asadollah Bayat-Zanjani, a major Shia religious leader in the holy city of Qom, condemned the security forces’ actions leading up to Ms. Amini’s death, saying they were “against the law, against religion and against logic.”

Iran’s main reformist political party, Hezb-i Etemad-i Melli, issued a statement calling for an end to the morality police and demanding that Iran’s Parliament repeal the hijab law, a first for a political group within Iran.

But Roya Boroumand, the executive director of the Abdorrahman Boroumand Center, a Washington-based advocacy group focused on human rights in Iran, said it was unlikely that the law, or the morality police, would be abolished.

“Hijab is the signature of the revolution,” Ms. Boroumand said. “It is what sets Iran apart from other Muslim nations and it is the means of terrorizing the population — women — without a cause.”

Planning to visit Siddhivinayak temple? Must check THIS new rule