President Vladimir V. Putin signed more than 400 pages of legislation annexing four Ukrainian regions, the Kremlin said on Wednesday, forging ahead with a parallel reality in which Russia pretends to exercise sovereignty over thousands of square miles of territory that its military does not actually control.

Russia’s economy ministry sought to attach real-world benefits to a largely illusory claim, forecasting that the annexation would raise Russia’s production of metallurgy and sunflowers by 20 percent each, while coal production would increase by 6 percent. The state news agency RIA Novosti released a map purporting to show Russia’s new territory, adding in fine print that part of it was “under the control of the Ukrainian Armed Forces.”

And Russian state television trumpeted the signing on Wednesday as the day’s biggest news story, while playing down or ignoring the fact that Russian forces are in retreat in multiple parts of the front line.

“The only currency unit starting Jan. 1, 2023, will be the ruble, and the territorial organs of the federal authorities will be created by June 1,” intoned the anchor on the 12 p.m. news on Channel 1.

Four laws spelling out the annexation process — one for each region, each numbering more than 100 pages — were published on a government website on Wednesday, with a Kremlin stamp on the last page, dated Oct. 4, standing in for Mr. Putin’s signature. It was an example of how Mr. Putin has long tried to legitimize his actions — however illegal — with a sheen of legality bestowed by Russia’s rubber-stamp institutions.

The Kremlin has declared that it will fight to capture all of Ukraine’s Donetsk and Luhansk regions — Ukraine still holds several Donetsk cities — but it has been more vague about its goals in the other two regions it is attempting to annex, Zaporizhzhia and Kherson. That has sown confusion about what new borders Russia is claiming with its illegal annexation.

While Mr. Putin announced the planned annexation last Friday in a bombastic and angry speech at the Kremlin, followed by a signing ceremony, there was no further fanfare involving the president this week.

But even the borders of the annexed territory — an annexation that has only been endorsed by North Korea — remained in flux on Wednesday as Ukrainian troops continued their counteroffensive in their country’s south and east. Mr. Peskov bristled when asked whether the annexation was contradicted by the Russian military’s retreats.

“There’s no contradiction here,” Mr. Peskov said. “They will be with Russia forever. They will be returned.” 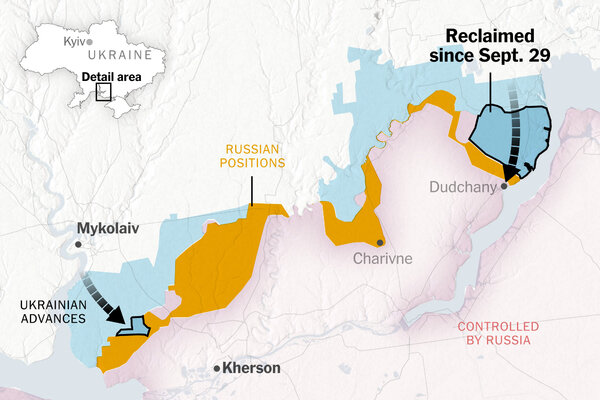 Ukraine’s advance in the southern Kherson region has accelerated in recent days.

UP cop beaten to death in attack over warrant

Is It Toxic to Tell Everyone to Get Therapy?