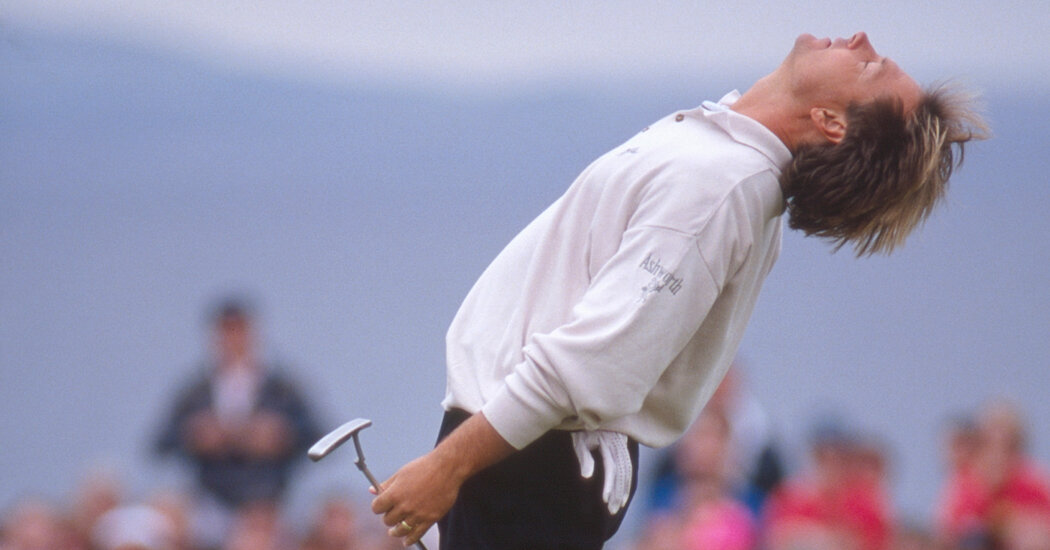 He was leading late in the 1992 Open, but ended up losing by a stroke.

In the 1992 British Open at Muirfield in Scotland, John Cook had his first major win within his grasp. Leading by two strokes in the final round, all he needed was to make a two-foot birdie putt on No. 17 and par No. 18, and the claret jug would, in all likelihood, have been his.

He missed the putt and bogeyed 18, finishing a stroke behind the champion, Nick Faldo.

Cook, who tied for second a month later in the P.G.A. Championship, won 11 PGA Tour events but no majors.

An analyst for Golf Channel, Cook, 64, reflected recently on the 1992 Open.

The following conversation has been edited and condensed.

Can you bring me back to that week in Muirfield and what it felt like to come so close?

I felt very confident. I was second or third on the money list and playing good. The problem was when I got over there, my clubs didn’t make it for two days. I walked around, hit shots out of Mark O’Meara’s [the American golfer] bag. Just kind of relearned the golf course. I played there in 1980, but hadn’t played any of the Opens from then on.

Why didn’t you go during those years?

I either wasn’t exempt or wasn’t high enough on the money list to take three weeks out, spend $20,000 to go. I had a young family. They couldn’t travel with me.

When did the clubs arrive?

I got them Tuesday evening, so I did get to practice on Wednesday with them. I was ready to go.

Maybe not having your clubs took a little pressure off?

You might be right. I felt refreshed. I felt like I knew the course by just kind of walking around, seeing things. Maybe, in a roundabout way, that’s the way to prepare. You’ve know what you got to do. You’ve got to keep it out of the bunkers, keep it out of the heather and go from there.

So the key is to call the airlines and have them lose your clubs?

On the green at 17, did you think you needed to make an eagle?

I’m thinking, if this [30-foot] putt goes in, great. If it doesn’t, not a big thing. Just go up, tap it in and move on to 18. I hit a good first putt, just missed on the right edge. It went by a couple of feet. I went up and marked it. This was just a little two-footer that normally you pay attention. I didn’t. I took it for granted.

What does that mean?

I got up and didn’t think about exactly where I wanted to hit it. I hit it too hard. It went through the break and missed. There’s some pressure there. I didn’t really feel it, but when I think about it, I got out of my routine, and that’s part of not handling the pressure. Part of handling the pressure is you stay in that routine. The same walk, the same marking of your ball, the same putting it down. For some reason, I took it for granted that this was already given to me.

How did you deal with such a heartbreaking loss?

That night was not comfortable. I got back to the house we were renting with Mark. He came out and handed us [Cook and his caddie] a couple of beers. He didn’t really say anything. He was busted up.

Thirty years later, is the pain still there?

Quite honestly, it is. Everyone keeps reminding me: “You’ve had a wonderful career. You’ve won 20 plus times on both tours. You can be proud of yourself.” Yeah, I’m very proud of that. I’ve won a lot of golf tournaments.

But I’m disappointed I didn’t win a major. I thought I had the game to win any of the majors.

Who you picking for St. Andrews?

I think Rory’s [McIlroy] game is just right. You’ve got to keep it out of bunkers, and you’ve got to stay away from hitting that one [disastrous] shot. He has that one shot in him. He can’t afford to have that one shot. And I think Xander [Schauffele, who has won his last two starts]. Those would be my two.