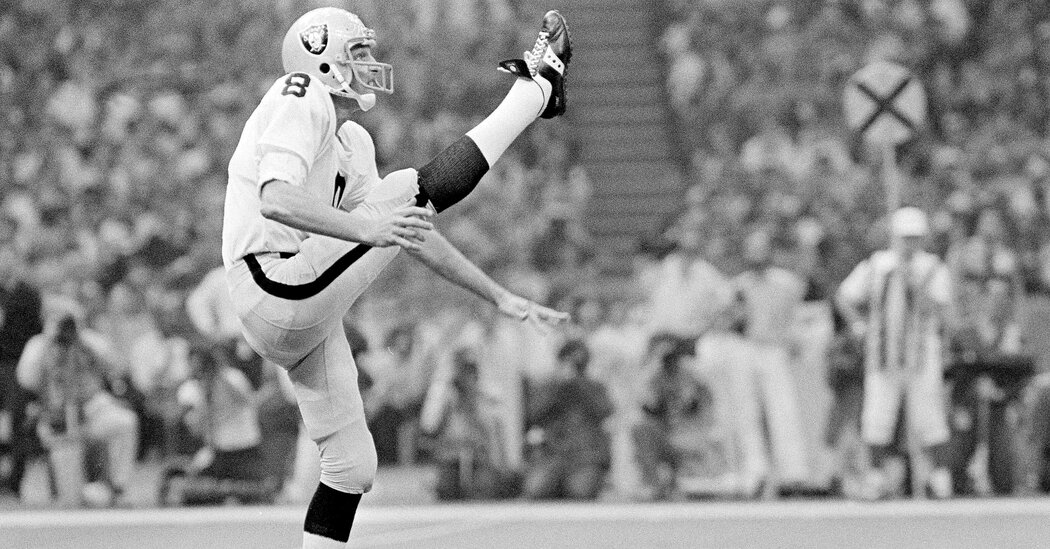 A slender Georgia country boy with the outlaw Oakland Raiders of the 1970s, he proved that a punt could be a spectacle in its own right.

Ray Guy, the first punter to be selected in the first round of the National Football League draft and, eventually, the first inducted into the Pro Football Hall of Fame, died on Thursday in Hattiesburg, Miss. He was 72.

The cause was advanced-stage chronic obstructive pulmonary disease, his son, Ryan, said.

It took until 2014, 28 years after his retirement, for Guy, who spent his entire career with the Oakland (and later Los Angeles) Raiders, to don the coveted gold Hall of Fame jacket. He was the first — and, to date, the only — member of the Hall whose sole job had been punting. Many people — including Guy himself — wondered aloud why it had taken so long.

He was “the best punter I’ve ever known,” Guy’s former coach John Madden, himself a Hall of Famer, once said. “When we first drafted him, it was a heck of a choice. I thought then he could be the greatest in the league, but I changed my mind. I think Ray proved he’s the best of all time.”

A three-time first-team All-Pro selection, Guy, a product of the University of Southern Mississippi, played on three Super Bowl-winning teams over the course of his 14-year career with the Raiders, which lasted from the team’s grit-and-grime era of the early 1970s, when its lineup was marked by crusty tough guys like George Blanda and Jim Otto, to the Hollywood-flash years of Marcus Allen and Lyle Alzado after the team had moved to Los Angeles in 1982. (The Raiders now play in Las Vegas.)

In 1994, the N.F.L. honored Guy by including him as the punter on its 75th Anniversary All-Time Team.

Guy led the N.F.L. three times in gross punt average. He nailed 210 punts inside the 20-yard line — a number that does not include his first three seasons, when the N.F.L. did not track that statistic. His career included only three blocked punts.

But his reputation goes beyond the raw numbers. He helped change the long-held conception that a punter was something less than an actual football player.

“Ray Guy was a football player who punted,” Madden said before Guy’s induction into the Hall of Fame.

Indeed, his athletic prowess went far beyond the moonshot blasts he launched with his right leg. “All through high school and college, I played other positions,” Guy said in his Hall of Fame enshrinement speech. “I was a good athlete and could have been a major league pitcher, or N.B.A. basketball player, but I knew God had something special for me.”

William Ray Guy was born on Dec. 22, 1949, in Swainsboro, a small city in central Georgia, and grew up in nearby Thomson. His father, Benjamin Franklin Guy, was a building contractor, and Ray helped him build and renovate houses while he was growing up. His mother, Annette (Cato) Guy, worked as a schoolteacher’s aide.

At Thomson High School, Guy’s athletic feats became the stuff of local lore. On the football team, he played quarterback, tailback, linebacker, safety, kicker and, of course, punter, averaging nearly 50 yards per punt in 1968, according to a 2017 article in The Atlanta Journal-Constitution. The day after he had led the team to its second consecutive state title, he scored 39 points for the basketball team, without benefit of a preseason. That spring, he threw 15 scoreless innings in Game 1 of the state baseball semifinals.

“He was known to his teammates as Wonderboy,” John Barnett, a Thomson historian and longtime assistant coach, told The Journal-Constitution. “He literally could do it all on the field, court or diamond.”

Guy married Beverly Bentley in 1972; they divorced about 40 years later. In addition to their son, Ryan, he is survived by a daughter from that marriage, Amber Guy; his wife, Sandy (Lord) Guy; a brother, Al; and two grandchildren. He lived in Purvis, Miss., a small city outside Hattiesburg.

When he showed up in the N.F.L., Guy hardly looked like a future gridiron star. A clean-cut Southerner with a willowy 6-foot-3, 195-pound frame, he seemed like an odd fit with the snarling band of West Coast misfits known as the Oakland Raiders in the 1970s.

Embracing a brutal brand of football under the rebellious owner Al Davis, the team played as if doling out injuries to opponents bestowed actual points on the scoreboard, and the players were every bit as roughneck off the field. The star quarterback, Ken Stabler, once rolled up to a Sports Illustrated interview in tiny Foley, Ala., at 9 a.m. in a Chevrolet pickup, frosty beer can in hand.

But in a broader sense, Guy was a symbol of the Raiders’ convention-flouting ethos, since no one but Al Davis would have picked a punter in the first round of the draft.

Before Guy’s selection in 1973 (he was 23rd overall), some teams had approached punts as a duty for, say, a backup quarterback or running back.

Guy made it clear that punting was an art in its own right. He helped turn a dispiriting expression of surrender on an offensive drive into a spectacle unto itself.

“Any time he got back there for a punt, fans watched like they were watching the ball on the 2-yard line with the game on the line,” the Raiders’ Hall of Fame cornerback Willie Brown was quoted as saying in The Los Angeles Times in 2014. “They knew he was going to do something special.”

CBSE Class 9, 11 students ‘not prepared’ for offline exams, urge board to consider...

COVID-19 impact: Govt not to print Budget documents this year

Where to Eat: Some of the Best Ice Cream in NYC Right Now