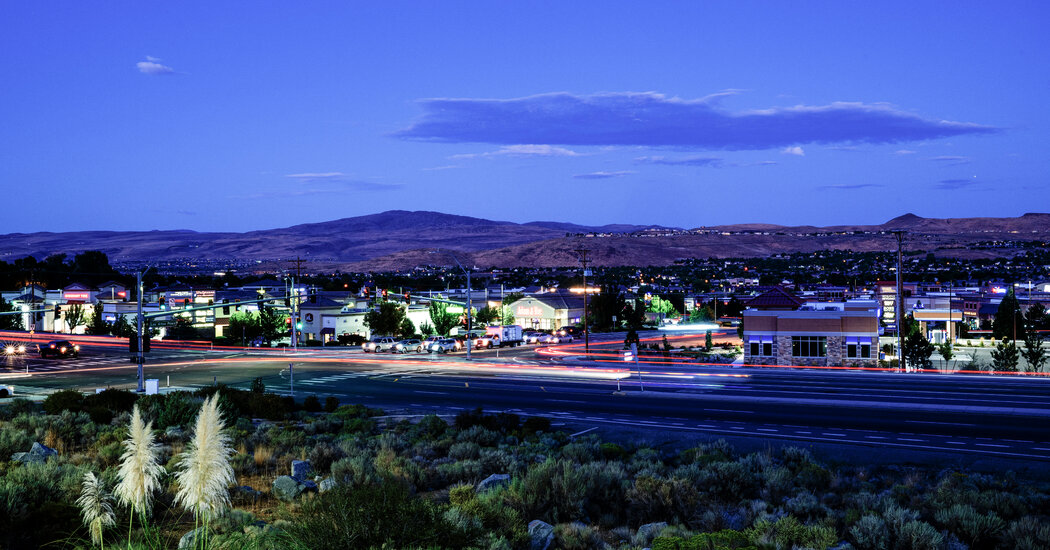 Companies are flocking to the Nevada city, but the rising cost of housing, gas and groceries is making daily life a struggle for many who work there.

As an employee at a UPS warehouse outside Reno, Nev., Christina Pixton spends her nights moving thousands of heavy packages on their way to far-flung locales like San Francisco, Phoenix and Chicago.

But the warehouse is not air-conditioned, and one night last month, there was no relief outside, either, with smoke from a California wildfire more than 100 miles away causing hazardous air quality. For Ms. Pixton, who has asthma, the irritation to her lungs was the latest challenge she had to learn to navigate in Reno.

These are boom times in and around Reno. Warehousing and casinos have long been the city’s main businesses, and the surge in e-commerce since the start of the pandemic has companies snapping up facilities as fast as they can be built.

Yet Reno and the surrounding area have also seen the cost of things like housing, gas and groceries rise, making daily existence in this growing metropolis increasingly difficult for many of the people who live here, like Ms. Pixton.

In the past five years, home prices in the area have risen 70 percent, according to Zillow. That’s good news for homeowners like Ms. Pixton. The typical home in Reno is worth $568,103, up 10.2 percent over the past year. But average rent for a one-bedroom apartment in Reno has increased 10 percent compared with last year and 40 percent from three years ago, according to data from Zumper, which tracks housing data.

And while homes and planned communities are being developed where farmland once was, affordable housing has become a much-discussed issue among residents and policymakers. Reno’s City Council approved additional affordable housing projects in March. In neighboring Sparks, Mayor Ed Lawson has pushed for denser development — building up and not just out — and more development on federal lands.

Other changes are affecting the way of life in Reno. By the time Ms. Pixton, 37, wants to go shopping after her shift ends around 11 p.m., stores that were once open are now closed after scaling back their hours during the pandemic. When she does make it to Walmart or Target, she often finds scant offerings on the shelves because of continuing supply chain issues and the fact that the Walmart, one of the few locations for miles, draws people from neighboring cities.

In a city whose economy is partly driven by getting goods to people across the country expeditiously, Ms. Pixton is left scrambling to find Uncrustables frozen sandwiches for her two sons and the right brand of dog food for the family’s Labrador retriever.

“This isn’t a sustainable pattern,” said Ms. Pixton, whose husband works as a foreman at an HVAC company. “We make six figures, and we’re still stuck in this struggling pattern.”

In May 2021, Ms. Pixton received a raise to $19 an hour, up from $16. It was a market-rate adjustment that UPS put in place across the country to stay competitive when hiring and retaining workers.

But in January, it went back down to $16. As a union steward, Ms. Pixton found herself telling other workers the bad news. Fifteen people quit that week, she said.

“It’s been quite hellish,” Ms. Pixton said. “It was not a completely livable salary, but it was something where we could struggle and not have to get a second job.”

A spokesman for UPS said that, starting on Oct. 2, another market-rate adjustment brought hourly pay for part-time workers back to $19 an hour.

In recent years, e-commerce companies have flooded the market. The Reno-Sparks area, with a population of about half a million, ticks a lot of boxes for companies seeking to expand back-end operations. There’s no state income tax, cheap land is available, there’s access to a main interstate and an international airport, and it’s close to California, whose huge economy and millions of people are significant draws for consumer companies looking to easily connect with their customers.

In 2014, when Elon Musk came to Nevada to celebrate the opening of Tesla’s giant Gigafactory warehouse, meant to build batteries for his company’s electric vehicles, he encouraged other executives to follow.

“What the people of Nevada have created is a state where you can be very agile, where you can do things quickly and get things done,” Mr. Musk said at the time, standing among the state’s legislators.

And follow they did. Chewy, Amazon, Thrive Market and Apple have opened or expanded warehouses in the area over the past decade. Third-party logistics companies like OnTrac and Stord have also propped up new facilities in town.

Reno has just a 0.5 percent vacancy rate for warehouses, according to data from the real estate service firm CBRE. About 8.8 million square feet is under construction in the Reno-Sparks area, according to CBRE, and about 80 percent of it is already leased.

Some of these companies have set up their own distribution channels to get their products where they need to go. Others use UPS. All of them need hundreds of people to complete the strenuous work of moving their goods through the facilities and getting them to consumers.

“Now Hiring” billboards dot Reno’s interstate and back roads. A chocolate factory was willing to pay as much as $25 an hour. A sign outside a Petco warehouse says a starting salary could be as high as $22 an hour. Hidden Valley Ranch’s plant says its starting hourly wage is $21, with other benefits including a 401(k), paid time off, and health care with dental and vision. Many retailers like Walmart are also trying to attract seasonal workers.

Those opportunities are siphoning off potential UPS workers and creating more manual labor for those who remain, said Ross Kinson, a business agent for the local Teamsters.

Like many in Reno, she is a California transplant. She moved from Chico with her now-husband, John, in 2008, when Reno was reeling from the housing crisis. Casinos filed for bankruptcy. New construction ground to a halt. She worked in the medical and fast food industries before turning to warehouses.

She started at UPS in 2018, attracted by the health care benefits and pension package, and initially made about $13 an hour. She works part time, usually 28 to 32 hours per week. Even though other companies have offered higher wages, she has stayed at UPS because the health benefits cover her children and her pension will vest in about a year.

When the pandemic hit, she felt the impact of millions of stuck-at-home shoppers buying all kinds of merchandise. Before Covid, about 70,000 packages would flow through her hub on a normal summer evening. During the pandemic summer of 2020, that number rose as high as 240,000, though it’s now around 115,000 to 140,000 packages a night.

“We’re handling the most amount of packages of any shift because we are getting all of the inbound local businesses. We’re getting the transfers from Sacramento and Oakland and Salt Lake City,” she said. “We’ll get all inbound stuff from other states and have our outbound stuff as well.”

Six people are considered a skeleton crew in her department, but Ms. Pixton said that often only three or four were working.

As the holiday season approaches, UPS says it plans to hire about 100,000 workers, and is speeding up the process by eliminating interviews and allowing candidates to apply online. At the hub where Ms. Pixton works, UPS is looking to add 400 workers.

The current contract that UPS has with the Teamsters went into place in 2018 and expires in 2023. Mr. Kinson said the union would push to formalize language regarding the market-rate wage adjustment for part-time workers for the next contract.

“We’d negotiate on good faith,” a UPS spokesman, Glenn Zaccara, said. “The wages they are receiving is industry-leading.”

But in a city like Reno that has seen rapid growth, workers argue that the terms of the contract haven’t kept up with reality.

“During the pandemic, everyone was getting temporary raises in Reno,” Ms. Goddard said. “At the beginning of 2022, most or all of the raises disappeared and so did the people.”

At her UPS job, Ms. Pixton is bracing for the holiday rush. But, she noted, every day has essentially become peak season, considering how much work there is and how few people there are to do it. And while she wishes that more people would join UPS to alleviate some of her workload, she understands why some look elsewhere for employment.

“If you’re making less than what you’re paying in gas,” she said, “what’s the point of going?”

UP: 4 dead, 3 hospitalised after consuming spurious liquor in Chitrakoot