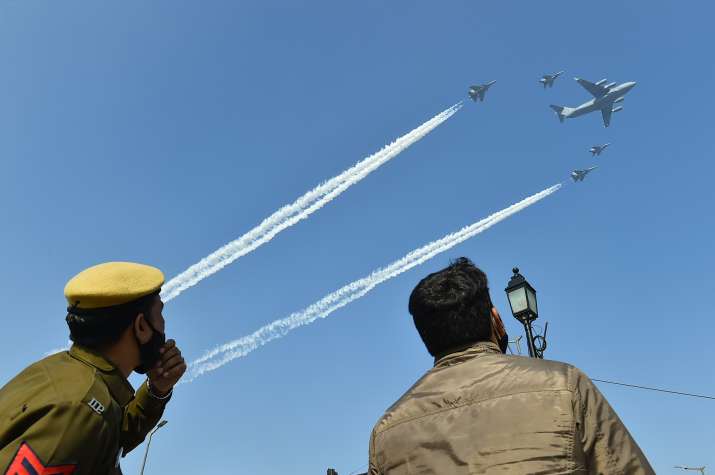 An unprecedented security cover has been put in place in and around Delhi for Republic Day. While the main traditional event will be held at Rajpath where India’s military might and cultural diversity will be on display, farmers’ tractor rally across several routes in the national capital will keep the security forces on their toes. One of the major attractions at this year’s Republic Day parade will be the flypast by Rafale fighter jets. Sukhoi-30 MKI fighter jets, T-90 tanks, the Samvijay electronic warfare system will also enthrall the audience. Total 32 tableaus — 17 from states and union territories, six from the Defence ministry, and nine from other Union ministries and paramilitary forces — depicting the nation’s rich cultural heritage, economic progress and defence prowess will also roll down the Rajpath at the Republic Day parade. For the first time, the 122-member contingent of the Bangladesh armed forces will also march on Rajpath.

09:42 AM: PM Modi leads the nation in paying tribute to the fallen soldiers by laying a wreath at the National War Memorial at the India Gate.

#RepublicDay: Prime Minister Narendra Modi leads the nation in paying tribute to the fallen soldiers by laying a wreath at the National War Memorial at the India Gate pic.twitter.com/mDX47YYVfr

09:37 AM: Defence Minister Rajnath Singh unfurled the Tricolour at his residence

09:14 AM: Bihar Chief Minister Nitish Kumar unfurled the national flag at his residence in Patna.

09:10 AM: Uttar Pradesh Chief Minister Yogi Adityanath unfurls the Tricolour at his residence in Lucknow.

07:38 AM: Preparations in final stages at Rajpath for Republic Day parade. Limited number of audience has been allowed in view of the pandemic. Seating provisions have been done keeping in mind social distancing norms.

Delhi: Preparations in the final stage for the #RepublicDay parade at #Rajpath; seating arrangement made keeping social distancing in mind pic.twitter.com/gOmWRGVwHg

07:32 AM: Republic Day parade at Rajpath and farmers’ tractor rally – Check full list of roads to avoid in Delhi, Noida, Ghaziabad and other areas.

07:28 AM: We faced an expansionist move on our borders, but our valiant soldiers foiled it: President Ram Nath Kovind. Read Full Text of President’s address to nation on the eve of Republic Day 2021.

07:23 AM: The country’s largest paramilitary force CRPF has been bestowed with the highest number of 73 gallantry medals for undertaking counter-terrorist operations in Jammu and Kashmir and in various Maoist violence affected states. It also earned four Kirti Chakras announced by the Ministry of Defence on the occasion of Republic Day.

07:13 AM: Republic Day 2021: India to show military might, cultural heritage at Rajpath

India will show its military might on Tuesday with Rafale fighter jets taking part in the Republic Day flypast for the first time and the armed forces showcasing T-90 tanks, the Samvijay electronic warfare system, Sukhoi-30 MKI fighter jets, among others | READ MORE HERE

Wishing all the people of India a Happy #RepublicDay. Jai Hind!