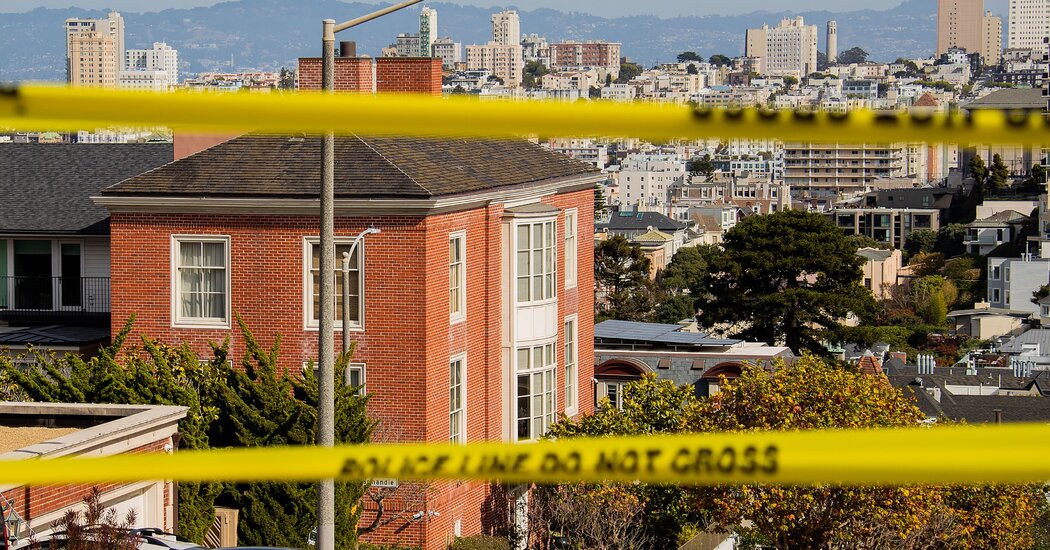 Some of the conspiracy theories have already seeped into the Republican mainstream.

Donald Trump Jr., the former president’s son, continues to post jokes about it.

Dinesh D’Souza, the creator of a discredited film about the 2020 election called “2000 Mules,” accused the San Francisco Police Department on Monday of covering up the facts.

The reason: Mr. Musk deleted a post linking to a newspaper that once claimed Hillary Rodham Clinton was dead when she ran for president in 2016.

In the days since Paul Pelosi, the 82-year-old husband of House Speaker Nancy Pelosi, was attacked by an intruder asking, “Where is Nancy?”, a litany of Republicans and conservatives have spread baseless conspiracy theories about the assault and its motives.

Although the police have not yet detailed all the circumstances of the crime, these theories have already seeped into the Republican mainstream. While many Republican officials have denounced the violence, others have at the very least tolerated, and in some cases cheered, a violent assault on the spouse of a political rival.

The disinformation “isn’t just political,” said Angelo Carusone, the president and chief executive of Media Matters for America, a progressive nonprofit. “It’s much bigger than that; it’s deeper. They’re really rethinking and reshaping a lot of our norms.”

The attack on Mr. Pelosi in the couple’s home in San Francisco early on Friday morning has raised fears about the rise of political violence against elected officials — increasingly, it seems, inspired by a toxic brew of extremism, hate and paranoia that is easily found online.

The assailant, identified by the police as David DePape, 42, posted a series of notes in the days before the attack suggesting that he had fallen under the sway of right-wing conspiracy theories and antisemitism online. Some of the flurry of posts by others questioning the circumstances of the attack appeared intended to deflect attention from Mr. DePape’s views.

No top Republican lawmakers joined in peddling unfounded claims about the attack, but few denounced them, either. Mrs. Clinton, the former first lady and senator who lost to Mr. Trump in 2016, pointedly blamed the party for spreading “hate and deranged conspiracy theories.”

“It is shocking, but not surprising, that violence is the result,” she wrote on Twitter on Saturday. “As citizens, we must hold them accountable for their words and the actions that follow.”

It was her post that prompted Mr. Musk, Twitter’s owner since last Thursday night, to insinuate that an alternate version of the assault was possible. “There is a tiny possibility there might be more to this story than meets the eye,” he replied directly to Mrs. Clinton.

Mr. Musk linked to an opinion piece from the Santa Monica Observer, a website known to publish falsehoods, which offered an alternative account of what led to the attack on Mr. Pelosi. Relying on an anonymous source and providing no evidence, the article claimed that the attacker was a male prostitute.

The story also indicated that the attacker was found by the police wearing only his underwear, a detail that was originally published by a Fox affiliate before getting widely circulated in right-wing communities online. The affiliate later removed the detail and appended a correction, saying the article “misstated what clothing the suspect was wearing.”

A spokeswoman for Fox Television Stations said the story was corrected within about two hours.

That change prompted a new round of baseless theories, with some right-wing Americans claiming a cover-up.

On Monday, federal prosecutors charged Mr. DePape with attempted kidnapping and assault of a relative of a public official. He was looking for Ms. Pelosi, who was in Washington at the time, and carrying “a roll of tape, white rope, a second hammer, a pair of rubber and cloth gloves and zip ties,” according to the office of the United States Attorney for the Northern District of California, which filed the charges.

Mr. DePape’s equipment — and his demand to know “Where’s Nancy?” — suggested a premeditated assault, which would undercut the counterfactual versions being spread online.

Even so, the conspiracy theories found receptive audiences, receiving tens of thousands of engagements on numerous platforms like Facebook and Twitter, and other platforms that have built smaller, though politically active, audiences.

Charlie Kirk, the conservative radio and YouTube host, expressed hope on Monday that some “amazing patriot” would post bail for Mr. DePape and become a “midterm hero.” “Bail him out and then go ask him some questions,” he said, adding that liberals were trying to politicize the attack.

Mr. Carusone noted that Fox’s coverage shifted over the weekend, much as it did after the 2020 election, when the network initially reported the outcome accurately only to later give credence to the false claims by Mr. Trump and others that the vote was somehow fraudulent.

Fox News did not respond to a request for comment.

The coverage of the attack on Mr. Pelosi began with fairly straightforward coverage of the crime, before portraying it as a consequence of Democratic “soft-on-crime” policies and, finally, as a mystery with darker undercurrents that could not yet be known.

“Look for what’s missing and what doesn’t add up,” David Webb, a Fox News contributor, said during “The Big Sunday Show.”

Mr. Carusone said the shift reflected a deference by the network, like the Republican Party, to the most extreme voices in the right-wing information ecosystem that both cater to.

“This was everywhere in the right-wing fever swamps immediately,” he said.

At the core of the flurry of disinformation, he argued, was a refusal to show any sympathy for an older victim simply because of his ties to a figure regularly vilified on the opposite end of the political spectrum.

Conservatives have for years turned opponents like Ms. Pelosi and others into cartoonish supervillains. Mr. Trump himself regularly called her “Crazy Nancy.”

“They’re very unlikely to give them any solace or support even in the most clear-cut circumstances,” Mr. Carusone said, “because in some way it cuts against the broader narrative that they’re supervillains and therefore deserve it.”