Now that Joe Manchin has saved the Democratic agenda, how should liberals think about him?

Joe Manchin has spent much of the past year as the villain of liberal America, receiving the kind of criticism that’s usually reserved for Donald Trump, Mitch McConnell or a conservative Supreme Court justice.

Activists aggressively protested against Manchin, some in kayaks outside his houseboat in Washington, others surrounding his car and chanting a vulgarity at him. One Democratic House member called him “anti-Black, anti-child, anti-woman and anti-immigrant,” while others called him untrustworthy. Bernie Sanders accused Manchin of “intentionally sabotaging the president’s agenda” and suggested that Manchin’s wealthy donors were the reason. Other critics called him a shill for the energy industry, noting that he personally owns a coal company.

And then Manchin made it possible for the Senate to pass the most aggressive climate bill in American history.

That bill seems likely to accomplish almost as much greenhouse-gas reduction as President Biden’s original proposal would have. As Paul Krugman, the Times columnist, has written, “Actual experts on energy and the environment are giddy over what has been accomplished.” Tomorrow, the House is expected to pass the same bill — which will also reduce inequities in health care access — and Biden plans to sign it soon afterward.

In today’s newsletter, I want to reconsider Manchin’s place in American politics given his ultimate support for the Senate bill. What were his critics right about? What were they wrong about? And what are the larger political lessons?

The simplest fact about Manchin is that he is the most electorally successful member of Congress: Nobody else has won a seat as difficult as his.

Trump won West Virginia by 39 percentage points in 2020, more than any in other state except Wyoming. Yet Manchin has repeatedly won statewide elections in West Virginia as a Democrat. This chart highlights Manchin’s uniqueness: 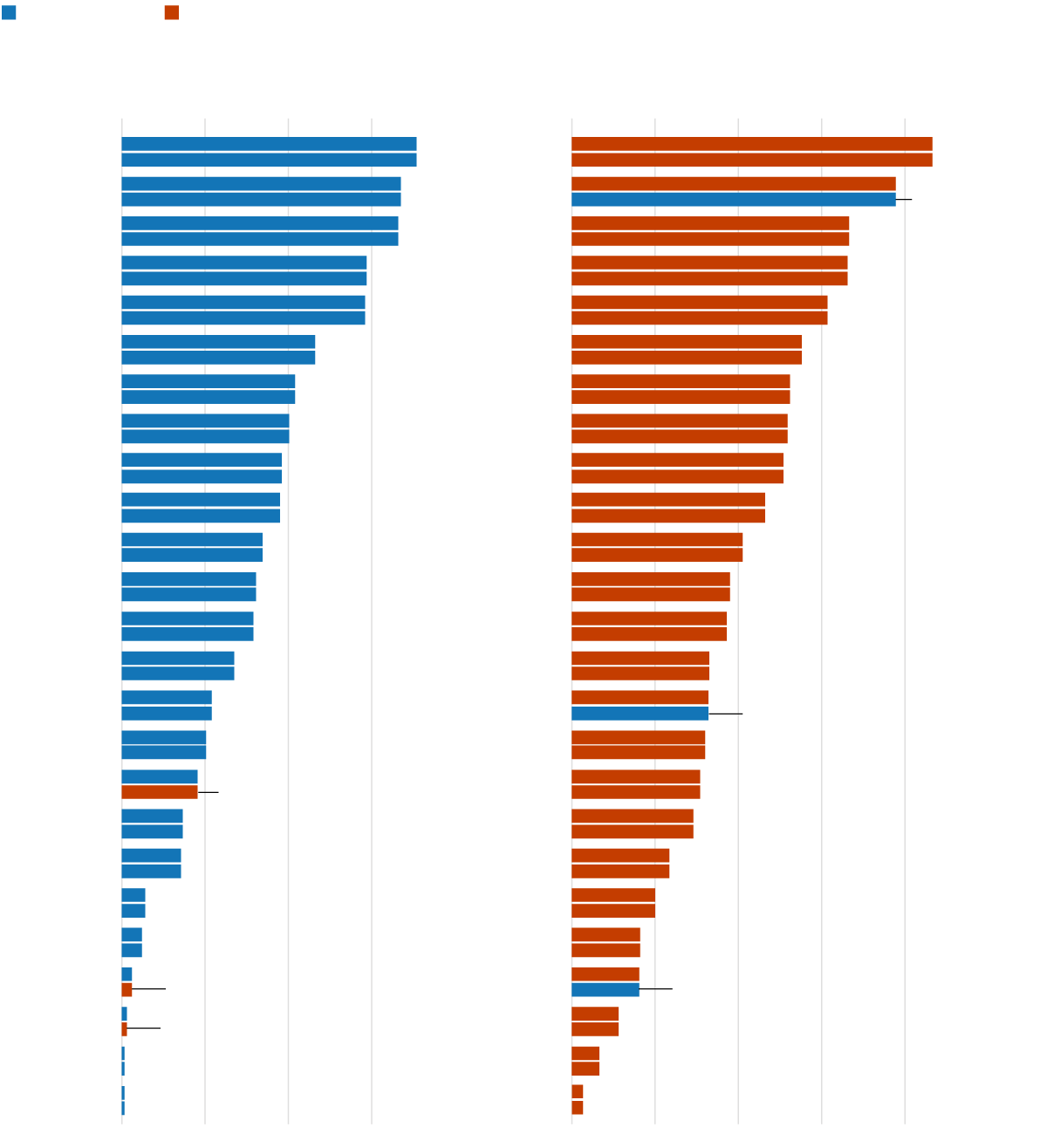 He is one of only four current senators whose victories truly defied their state’s partisan lean. And his victory was much more difficult than those of the other three — Jon Tester of Montana, Sherrod Brown of Ohio and Susan Collins of Maine. “Having a Democratic senator in 2021 in a state like West Virginia — where neither Hillary Clinton nor Biden could crack 30 percent of the vote — is a remarkable bit of good fortune” for Democrats, Hans Noel, a Georgetown University political scientist, has written.

Without Manchin in the Senate, Biden’s presidency would look very different. The climate bill would almost certainly have failed. So would have the expansion of health care. Biden would also have a harder time getting judges and other nominees confirmed.

Manchin’s liberal critics sometimes imagine that they know more about winning a West Virginia election than he does — and that he could keep winning even if behaved like most Democrats. As Ruy Teixeira, another political scientist, wrote, “If only he was not the actually-existing Joe Manchin from the actually-existing conservative state of West Virginia but instead some other Joe Manchin from some other, much more liberal, West Virginia!”

It’s true that Manchin has helped defeat some Democratic priorities over the past two years. He doomed the extension of an expanded child tax credit that would have reduced child poverty. He refused to abandon the filibuster to pass changes to voting rights (although he wasn’t the only Senate Democrat opposed to doing so). He helped block two highly qualified Biden nominees, Sarah Bloom Raskin as a top Federal Reserve official and Neera Tanden as the budget director.

But these Democratic disappointments were not shocking. Manchin has survived by being a loyal Democrat on some issues — like health care, labor issues, taxes on the wealthy and, for the most part, climate policy — and defying the party in high-profile ways on other issues. His criticisms of Biden’s proposals over the past year increased his approval rating in West Virginia, polls showed.

“It should be possible for Democrats to hold two thoughts at once about the West Virginia politician,” as Noel explained in The Washington Post. First, Manchin is more conservative than most Democrats and sometimes damages the party’s agenda. Second, he nonetheless may be the most valuable Democrat in Washington today. (If you believe Biden was the only plausible 2020 nominee who would have beaten Trump, then perhaps Manchin is in second place.)

Did the critics help?

With all this said, I understand some of the intensity of the liberal criticism in recent months. Had Manchin blocked the climate bill, as he seemed on the verge of doing, it would have represented a bigger break with his party than anything he had done before. It would have come on an issue of signature importance to the country and the world.

The obvious question is whether the criticism itself helped changed Manchin’s mind. I think that many of the harshest attacks probably didn’t matter: After all, he has heard similar criticism about his positions on the filibuster and voting rights, and he hasn’t budged. But the specific argument that he alone could be responsible for climate damage may have helped sway him. That, at least, is the impression of many observers on Capitol Hill.

“He always signaled he was open to going big on climate,” Representative Ro Khanna, a progressive California Democrat, told SFGate this week. And Carl Hulse, The Times’s chief Washington correspondent, told me: “Manchin did not want to be the man Democrats blamed for single-handedly letting the planet go up in flames. He was the one returning to Chuck Schumer looking to make a deal after the onslaught of criticism.”

Ultimately, Manchin is much more of a positive than a negative for Democrats. The party’s bigger problem is that it does not have more versions of Joe Manchin, because it struggles so mightily to win elections in heavily working-class regions outside major metropolitan areas. With even one more Democrat in the Senate, Manchin’s progressive apostasy would be far less consequential than it is. His vote would no longer be vital.

A white supremacist injured Constance Paige Young in Charlottesville. Strangers lifted her up.

Preparing for a war over Taiwan is the best way for the U.S. to deter one, Elbridge Colby argues in Foreign Affairs.

Spencer Bokat-Lindell asks: Is there an end in sight for the war in Ukraine?

Young kings of Silicon Valley: The boy bosses are on their way out.

A Times classic: Is seltzer as healthy as still water?

Lives Lived: Days after Sept. 11, the C.I.A. asked Gary Schroen to postpone his retirement and lead a team into Afghanistan to hunt for Osama bin Laden. Schroen died at 80.

A very New York M.L.B. free agency: The best hitter and the best pitcher (when healthy) on the planet will be free agents this fall — and the former, Aaron Judge, just keeps slugging his way toward a megadeal. The Yankees get a big oops in the chat.

The World Cup gets altered: FIFA is moving the biggest event in sports this year up one day so that the host country, Qatar, can kick things off. The U.S. men’s national team may add a late-blooming goalscorer in time for the tournament.

Taking care of business: Kentucky’s Oscar Tshiebwe can’t yet capitalize on most NIL opportunities in the U.S. So the reigning college basketball national player of the year is utilizing a team trip to the Bahamas for a $500,000 NIL blitz.

Climate change is taking a toll on outdoor summer performances.

Last August, wildfire smoke forced the Oregon Shakespeare Festival to cancel almost every performance of a show about Fannie Lou Hamer. The theater now has a smoke team, which decides daily on whether to proceed with the show. In France last month, heat and smoke at a Pearl Jam concert damaged the throat of the lead singer, Eddie Vedder. And in Spring Green, Wis., a theater asks costume designers to eliminate wigs, jackets and other heavy outerwear.

Here’s the story, by the theater reporter Michael Paulson.

Upside-down cakes are easy and beautiful, no matter what fruit you use.

The pangrams from yesterday’s Spelling Bee were demonize and demonized. Here is today’s puzzle.

P.S. The Times won a Pulitzer last year for its Covid coverage. The pandemic kept the medal from going on display at the Times Building — until now.

“The Daily” is about abortion.

Stuck on the Streets of San Francisco in a Driverless Car