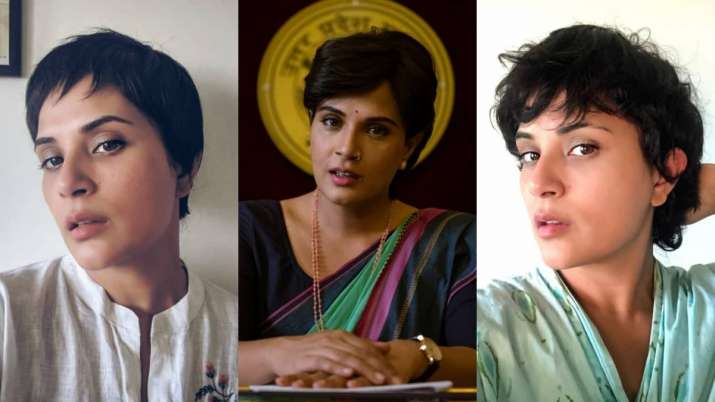 Achieving the right look for a political drama is key to creating a more authentic film. And if the first glimpses of Richa Chadha’s Madam Chief Minister is anything to go by, one would say that director Subhash Kapoor cracked the right vibe for the film. Word has it that on the making stage, Kapoor tried close to 20 looks on Chadha before finalizing the current one for the film. There’s an idea behind the genesis of the look for Richa that’s delved into in detail in the film itself.

Week on week, the actress along with her team of stylists tried different variations before achieving the current look. Even in the trailer, one may notice that the look evolves as Tara gains power and clout over the years. Talking about it, Richa says, “There is a cute little anecdote behind why I had to wear a wig. The director ideally wanted me to chop my hair and I was ready for it. He wanted a powerful, fuss free haircut that suited the character. But it was just around then that the date for our marriage got fixed. I realised I would have a mushroom cut by the time it was April 2020, if I had chopped off my hair for the part. Something I have hated since childhood is the mushroom cut. The director very kindly consented for me to use a wig, these are the various wigs we tried for Madam CM.”

Directed by Subhash Kapoor of Jolly LLB fame, in the trailer it revealed that Madam Chief Minister is a story of a woman breaking the shackles of the caste system and patriarchy who enters the world of politics. Richa Chadha once again managed to leave us spellbound with her portrayal of the character. While it was said that the film is based on the story of UP’s former CM Mayawati, the disclaimer claims that it is a fictional story and inspired by real-life.

This would be Chadha’s second theatrical release amid the coronavirus pandemic, after Shakeela which hit cinema halls last month.