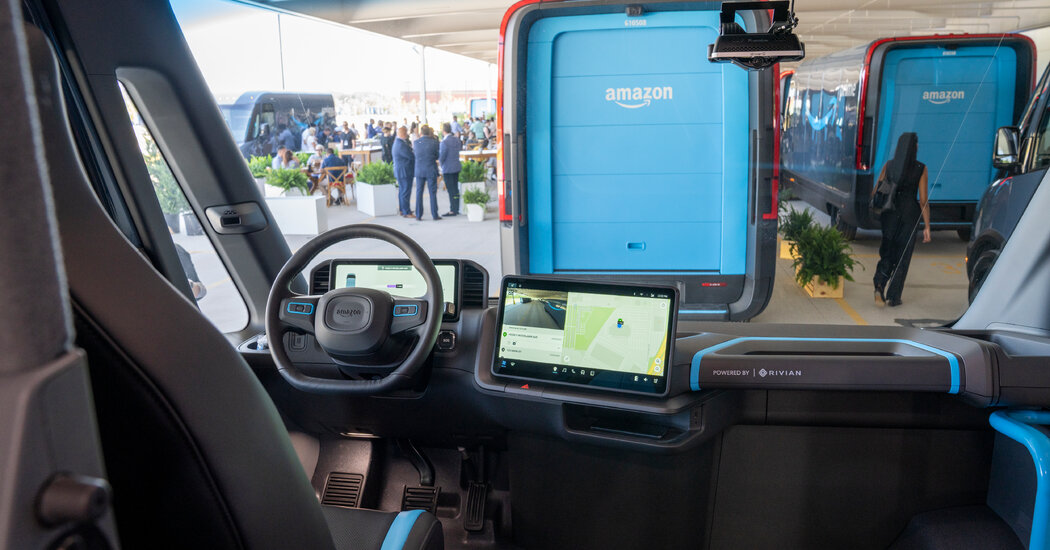 Rivian, a fledgling electric-vehicle manufacturer, said Thursday that it lost $1.7 billion in the second quarter.

The company said it was continuing to struggle to get enough components to ramp up production to higher levels, but it affirmed its expectation that it would make 25,000 vehicles by the end of the year.

“Supply chain continues to be the limiting factor of our production,” the company said in a statement. “However, through close partnership with our suppliers we are making progress.”

Rivian said it generated $364 million in revenue from April to June, up from $95 million in the first three months of the year. It also said it had customer reservations for 98,000 vehicles at the end of June.

Rivian said last month that it produced 4,401 vehicles in the second quarter and delivered 4,467 to customers.

In a conference call, Rivian’s chief executive, R.J. Scaringe, said that the company was seeing improvement in component availability, and that it was optimistic it could increase output in the second half of the year.

“The second quarter saw a number of challenges in terms of semiconductors as well as overall ramping in our supply base,” he said. “As we look out over the remainder of the year, we have a lot of confidence” about accelerating production.

The company plans a second shift of production by the end of the third quarter and has started hiring workers for it, Mr. Scaringe said.

Rivian said it expected a full-year adjusted loss of $5.45 billion, up from an earlier forecast of $4.75 billion. It attributed the increase to higher material and shipping costs stemming from inflation, and costs associated with increasing production.

Rivian was once viewed as “the next Tesla,” an electric-vehicle maker poised to grow rapidly and unsettle century-old giants of the auto industry like Ford Motor, General Motors and Volkswagen. It planned to make an electric pickup and sport utility vehicle — models that would set it apart from the minimalist electric cars that Tesla produces.

The company gained billions of dollars in backing from investors including Ford and Amazon, which announced it intended to buy 100,000 electric delivery vans from Rivian.

Rivian’s initial public offering was the largest of 2021, and within a few days its stock price soared. For a time, the company’s market value was greater than that of Ford and General Motors combined.

But difficulty in sourcing critical computer chips and manufacturing troubles at its plant in Normal, Ill., kept production far below what the company had hoped for. It has also struggled to build delivery vans for Amazon. Rivian’s stock price plummeted, and investors remain concerned about the company’s prospects.

Now, as production is climbing, it faces a tougher competitive landscape. Ford has started making an electric pickup, the F-150 Lightning, which is likely to pass Rivian in sales by the end of the year. Ford, Volkswagen, Hyundai and several others have ramped up sales of electric S.U.V.s, and G.M. has said it will start selling an electric version of its Chevrolet Silverado pickup and a pair of electric S.U.V.s next year.

Buyers of some of Rivian’s vehicles are also expected to soon lose access to a federal tax credit under the climate bill that the House is expected to approve on Friday; the Senate passed it on Sunday. Under the bill, purchases of vans, S.U.V.s and pickups that sell for more than $80,000 will not qualify for tax credits. The credits will also not be available to individuals or couples who earn more than $150,000 or $300,000 a year.

Rivian said last month that it was laying off about 6 percent of its 11,500 employees. “To fully realize our potential, our strategy must support our sustainable growth as we ramp towards profitability,” Mr. Scaringe said in a letter to employees. “We need to be able to continue to grow and scale without additional financing in this macro environment.”

Neetu Kapoor remembers Rishi Kapoor on wedding anniversary: Would have been our 41 years...

Bird Flu Found in Dolphin in Florida and Porpoise in Sweden

‘Indians are not guinea pigs’: Congress raises question over COVAXIN’s efficacy, roll out