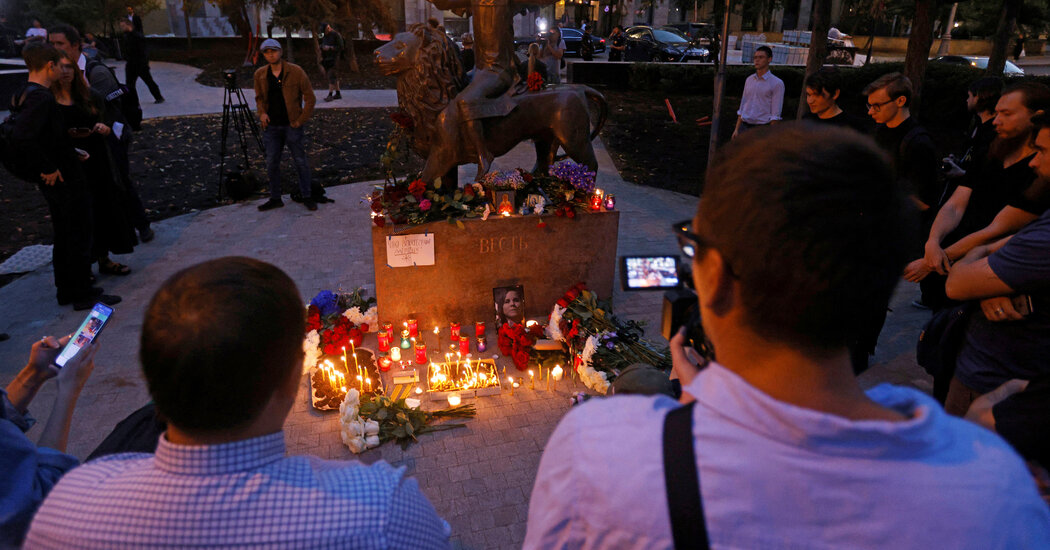 The clamor over the assassination of Daria Dugina highlights the prominence of her fellow pro-war Russian ultranationalists.

A Russian intelligence service accused Ukraine on Monday of assassinating an ultranationalist commentator as figures in Russia’s pro-war camp clamored for retaliation, highlighting the growing domestic political pressure that President Vladimir V. Putin is facing six months after he ordered the invasion of Ukraine.

Moscow’s swift claim to have solved the crime, and the heated demands for vengeance, pointed to the expanding influence of Russia’s ultranationalist hawks — a loose group of writers, business magnates and politicians who celebrated Mr. Putin’s war and have since grown frustrated that the Kremlin is trying to maintain a sense of normalcy at home rather than putting the nation on a war footing.

Ukraine denied any connection to the car bombing near Moscow on Saturday that killed Daria Dugina, 29, daughter of Aleksandr Dugin, a political theorist who has long called for the reconquest of Ukraine and whose hawkish visions of a resurgent, imperial and anti-liberal Russia provided an intellectual framework for Mr. Putin’s aggressive foreign policy.

Russia’s domestic intelligence agency, the F.S.B., issued a statement on Monday saying that the attack “was prepared and committed by the Ukrainian intelligence agencies” and carried out by a Ukrainian woman traveling with her young daughter, who then drove across the border into Estonia.

Pro-Kremlin voices aimed their wrath at Estonia as well as Ukraine, suggesting that Estonia, a NATO member, was sheltering the assassin. A senior Russian lawmaker, Vladimir Dzhabarov, said that if Estonia did not hand her over, there would be “every reason for the Russian Federation to take tough actions against the Estonian state,” hinting at the possibility of an escalation in Russia’s broader conflict with the West.

Ukraine’s presidential adviser, Mykhailo Podolyak, said on Twitter that the F.S.B. statement was “propaganda” from a “fictional world.” Andriy Yusov, a spokesman for Ukraine’s defense intelligence agency, said in a statement, “It is a fake that Ukraine is involved in this.”

But it was not immediately possible to verify either the allegations or the denials, as is often the case in war. Russia has shut down independent reporting and has made it a crime to dispute the Kremlin’s account of the war. Russian claims, in particular, about atrocities, provocations and battlefield setbacks, have repeatedly proved false.

Russian media speculated that Mr. Dugin, who is better known and more influential and had been with his daughter at a nationalist festival shortly before she was killed, was the intended target. But the F.S.B. said the operation was meant to kill Ms. Dugina, who had earned a following with frequent appearances on state media.

The festival had been organized by a nationalist writer, Zakhar Prilepin, who has long advocated an imperialist foreign policy by Moscow and last year was elected to Russian Parliament — a sign of the nationalists’ rising stature in Mr. Putin’s system. Ms. Dugina represented a youthful face of that camp, using her own rising prominence on social media and television to cast the Ukraine war as only a part of an existential conflict against the West’s “global hegemony” that Russia was destined to fight.

Mr. Putin offered his condolences to Ms. Dugina’s parents in a statement, calling her “a bright, talented person” killed in a “vile, cruel crime” and posthumously awarded her Russia’s Order of Courage. But he said nothing about what, if anything, the killing could mean for the war in Ukraine, where Russia’s battlefield advances have stalled and where conservatives such as Mr. Dugin say Russia is fighting with insufficient intensity.

Ukrainians are bracing for a dangerous week. The country’s Independence Day on Wednesday is seen as a symbolic date on which Mr. Putin could redouble his assault. Mr. Dugin, in his first public comments since his daughter’s death, cast her as a martyr and called on Russia to continue fighting.

“Our hearts yearn for more than just revenge or retribution,” Mr. Dugin said in a statement released by an associate, the ultranationalist business magnate Konstantin Malofeev. “We only need our victory. My daughter laid her maiden life on its altar. So win, please!”

Mr. Malofeev, who was photographed with Ms. Dugina at the festival outside Moscow just before her death, vowed that there would be a “Daria Dugina Street” in Kyiv.

“For this, we will first rebuild Kyiv and all other cities of Ukraine as part of a future Great Russia,” he wrote on social media.

Mr. Putin has increasingly echoed the imperialist views of people like Mr. Dugin and Mr. Malofeev in his rhetoric and in his aggression. But he has also taken care to leave his options open, stopping short of vowing to topple President Volodymyr Zelensky or to conquer all of Ukraine.

Tatiana Stanovaya, a Russian political analyst, wrote that Ms. Dugina’s murder “is serving to increase dissatisfaction with the authorities in conservative circles, who believe that the Kremlin is drawing red lines in the wrong place and is too hesitant when they are violated.”

The F.S.B. said that the Ukrainian suspect entered Russia on July 23, rented an apartment in the Moscow building where Ms. Dugina lived “in order to organize the murder of Dugina and obtain information about her lifestyle” and attended the same festival on Saturday. It also released video footage that it said showed the assassin crossing the border into Estonia, driving a gray Mini Cooper.

The F.S.B.’s remarkably swift claim to have solved the killing of Ms. Dugina may not convince those who are skeptical of an agency once headed by Mr. Putin that, in previous cases, had been much slower to identify suspects or never did. After the deaths of the journalist Anna Politkovskaya in 2006 and the opposition leader Boris Nemtsov in 2015, the authorities eventually charged and tried groups of people they accused of carrying out the killings, but not those who hired or directed them.

Like its Soviet-era predecessor, the K.G.B., the F.S.B. has been dogged for years by suspicions that it blames others for crimes it either committed itself or had no real interest in solving because they involved well-connected Russians.

In a sign of the political sensitivity of Ms. Dugina’s killing, Russian state television on Monday paid tribute to her as a visionary figure. A talk show on state-run Channel One showed Ms. Dugina visiting occupied Ukraine and referring to the country as a place where the West “is refining its strategy for how to destroy its main enemy: Russia.”

“She died because she wasn’t afraid to say what long ago should have been shouted about,” the host said.

There have been many attempts on the lives of Russian public figures, but they have usually been on Kremlin opponents, not allies, like Ms. Politkovskaya and Mr. Nemtsov. Alexander V. Litvinenko, a former F.S.B. agent living in London who was openly critical of Mr. Putin’s government, was fatally poisoned in 2006, and there were failed attempts to use a nerve agent to kill a turncoat former Russian spy, Sergei Skripal, in Britain in 2018, and the opposition leader Aleksei A. Navalny in 2020. Western intelligence agencies blamed all three attacks on Russian security services.

Margarita Simonyan, the editor of the state television network RT, on Monday recalled the poisoning of Mr. Skripal as she echoed the Russian threats against Estonia for allegedly harboring Ms. Dugina’s assassin.

She posited on social media that Russia could send “professionals who want to admire the spires in the vicinity of Tallinn,” Estonia’s capital. After two Russian intelligence operatives were identified as suspects in Mr. Skripal’s poisoning, they told Ms. Simonyan in a televised interview that they had been mere tourists visiting Salisbury, England, to admire its cathedral spire.

Tensions have been running high between Russia and the Baltic states, which broke away from the Soviet Union three decades ago and have been particularly fearful of the regional hegemony Mr. Putin wants to re-establish for Moscow. They joined NATO and the European Union in 2004, and this year the Baltics, particularly Estonia, have been among Europe’s leading critics of the Kremlin.

Estonia said it had received no official request for information or cooperation from Moscow in connection with the attack. Its police service declined to comment on whether the suspect had entered the country, issuing a statement that said: “We can share information about the individuals entering or leaving Estonia only in cases prescribed by law — Russian F.S.B.’s accusations, which reached us through the media, is not one of them.”

Tisca Chopra’s first look from ‘Worry 1.0’ will keep you hooked for more