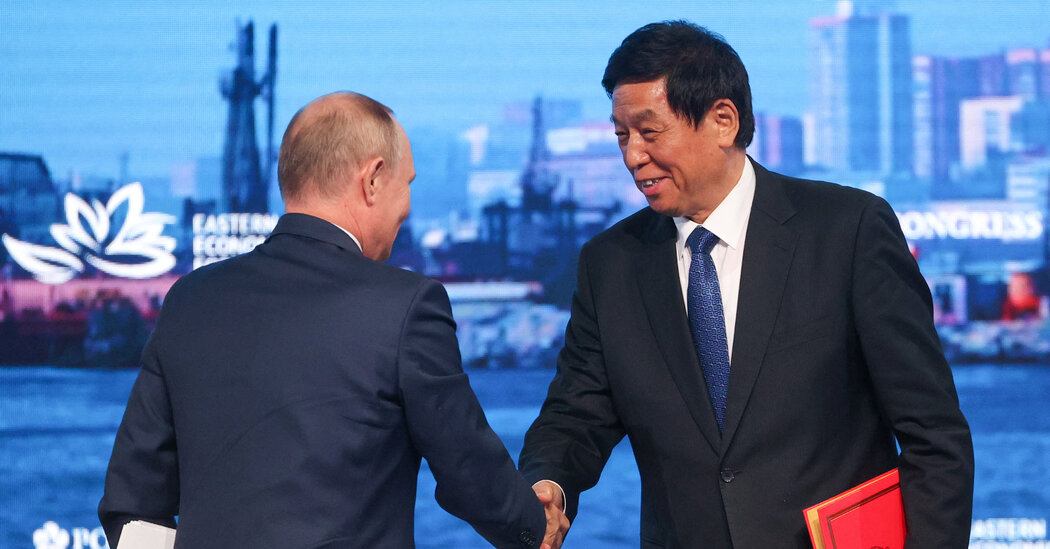 A senior Chinese official offered Beijing’s most robust endorsement yet of Moscow’s war in Ukraine, telling a group of Russian lawmakers on Friday that China “understands and supports Russia,” particularly “on the situation in Ukraine,” according to an official Russian description of the meeting.

Li Zhanshu, the third-ranking member of the Communist Party of China, visited Moscow last week after attending an economic forum in the eastern Russian city of Vladivostok, where he met with President Vladimir V. Putin of Russia. Mr. Li is the highest-level Chinese official to leave the country since the start of the pandemic.

Mr. Li traveled in advance of a trip by Xi Jinping, China’s leader, who is expected to go to Kazakhstan on Wednesday and Uzbekistan later in the week, where he will meet with Mr. Putin at a gathering of leaders from the region.

Russia is touting warming ties with China as its war drive is facing setbacks, with Ukrainian forces retaking territory in the country’s northeast and some Kremlin allies grumbling about the grinding conflict’s lasting longer than expected.

In Vladivostok Mr. Li praised Mr. Putin, saying that under his leadership Russia was “not crushed by the severe sanctions of the United States and the West, but rather in a short period achieved stability and showed resilience.”

But it was later in Moscow that he offered his strongest endorsement of the Russian leadership.

“We see that the United States and its NATO allies are expanding their presence near the Russian borders, seriously threatening national security and the lives of Russian citizens,” Mr. Li said, according to a description from the Russian Parliament. “We fully understand the necessity of all the measures taken by Russia aimed at protecting its key interests; we are providing our assistance.”

“On the Ukrainian issue, we see how they have put Russia in an impossible situation,” he added. “And in this case, Russia made an important choice and responded firmly.”

China has tread carefully in addressing the war in Ukraine. The Chinese state news media did not report on Mr. Li’s Ukraine comments and has given his trip modest coverage.

Russia invaded Ukraine days after the end of the Beijing Olympics. Mr. Xi met with Mr. Putin in Beijing before the start of the Games, releasing a 5,300-word statement that described a friendship with “no limits” between the two countries and a shared ambition to counter the influence of outside forces in their regions, a message aimed squarely at the United States.

While Beijing has refused to criticize Mr. Putin’s actions or refer to the conflict as a “war,” it has also been cautious about overtly endorsing it and denied any advance knowledge of Russia’s plans.

China has maintained robust trade ties with Russia, buying record levels of its oil in May, June and July as Europe is increasingly shunning Russian petroleum. But China has been careful to avoid violating sanctions on Russia that could lead to its being punished as well.

Hrithik Roshan says it was difficult for him to laugh on screen; reveals about...

Despite COVID-19, govt took up reforms to make India one of top economies: Sitharaman