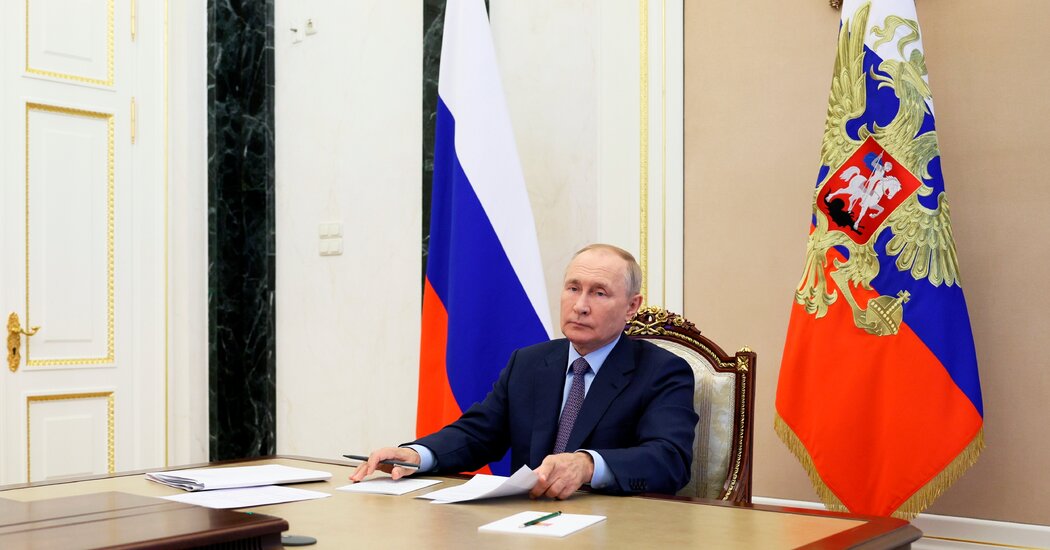 WASHINGTON — Russia has covertly given at least $300 million to political parties, officials and politicians in more than two dozen countries since 2014, and plans to transfer hundreds of millions more, with the goal of exerting political influence and swaying elections, according to a State Department summary of a recent U.S. intelligence review.

Russia has probably given even more that has gone undetected, the document said.

“The Kremlin and its proxies have transferred these funds in an effort to shape foreign political environments in Moscow’s favor,” the document said. It added, “The United States will use official liaison channels with targeted countries to share still classified information about Russian activities targeting their political environments.”

The State Department document was sent to American embassies around the world on Monday to summarize talking points for U.S. diplomats in conversations with foreign officials.

Ned Price, the State Department spokesman, confirmed at a news conference on Tuesday that the findings on Russia were the result of work by U.S. intelligence agencies. He added that Russian election meddling was “an assault on sovereignty,” similar to Russia’s war on Ukraine. “In order to fight this, in many ways we have to put a spotlight on it,” he said.

The document appears to be an initial effort by the Biden administration to use intelligence material to expose the scope of Russian interference in political processes and elections, and to rally other nations to help combat it.

U.S. intelligence agencies have determined that Russia interfered in the 2016 presidential election in favor of Donald J. Trump, who defeated Hillary Clinton, the Democratic nominee. Its methods included the use of cyberoperations to spread online disinformation.

The new document says that a range of Russian agencies and individuals carry out the global operations, including the Federal Security Service and other security agencies, as well as business figures.

The document named two men, Yevgeny Prigozhin and Aleksandr Babakov, both close associates of Mr. Putin, as involved in the influence or interference campaigns. In April, the Justice Department charged Mr. Babakov, who is also a Russian lawmaker, and two other Russian citizens with conspiring to violate U.S. sanctions and conspiring to commit visa fraud while running an “international foreign influence and disinformation network to advance the interests of Russia.”

The Russians pay in cash, cryptocurrency, electronic funds transfers and lavish gifts, the document said. They move the money through a wide range of institutions to shield the origins of the financing, a practice called using cutouts. Those institutions include foundations, think tanks, organized crime groups, political consultancies, shell companies and Russian state-owned enterprises.

The money is also given secretly through Russian Embassy accounts and resources, the document said.

In one Asian country, the Russian ambassador gave millions of dollars in cash to a presidential candidate, the document said. U.S. agencies have also found that Russia has used false contracts and shell companies in several European countries in recent years to give money to political parties.

“Some of Russia’s covert political financing methods are especially prevalent in certain parts of the world,” the document said. It added, “Russia has relied on state-owned enterprises and large firms to move funds covertly across a number of regions including Central America, Asia, the Middle East and North Africa, and on think tanks and foundations that are especially active across Europe.”

As of last year, the document said, a Russian business figure was trying to use pro-Russian think tanks in Europe to support far-right nationalist parties. The document warned that in the coming months, Russia might use its “covert influence tool kit,” including secret political financing, across broad swaths of the globe to try to undermine the American-led sanctions on Russia and to “maintain its influence in these regions amid its ongoing war in Ukraine.”

Although U.S. intelligence agencies have been studying Russian global election interference and influence for years, the intelligence review was ordered by senior administration officials this summer, U.S. officials said. Some of the findings were recently declassified so they could be shared widely.

Officials say one aim of the U.S. campaign to reveal details about Russian political interference and influence is to strengthen democratic resilience around the world, a pillar of President Biden’s foreign policy. Administration officials are focused on ensuring that nations that took part in last year’s Summit for Democracy, which Mr. Biden held in Washington, can buttress their democratic systems. The administration plans to convene a second summit soon.

The State Department said in the summary that it was urging governments to guard against covert political financing “not just by Russia, but also by China and other countries imitating this behavior.”

After Parkland, One Question Remains: What Is Justice?