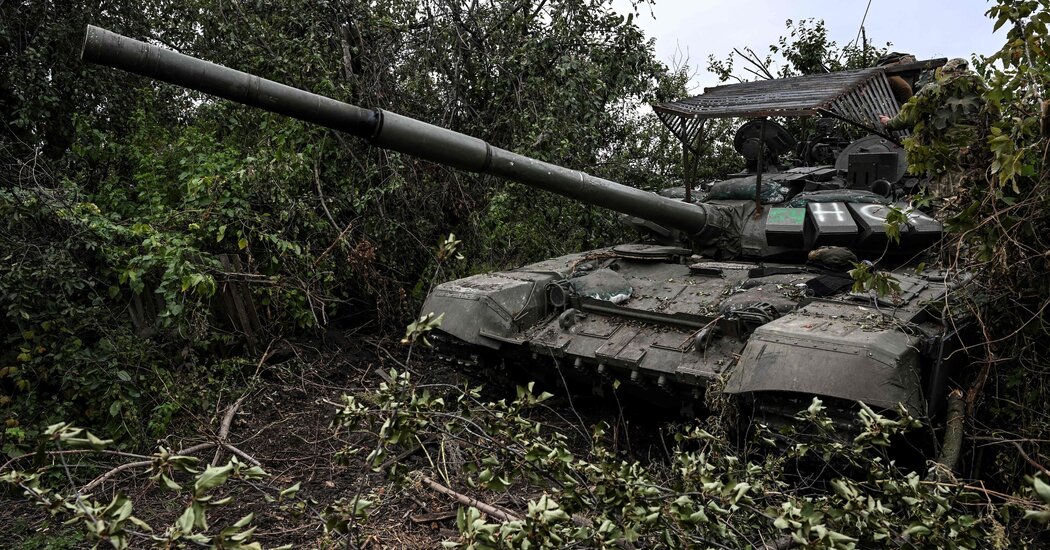 More than 40 local elected officials across Russia signed a two-sentence petition on Monday that ended with: “We demand the resignation of Vladimir Putin from the post of president of the Russian Federation!”

The petition, pushed by opponents of the Ukraine invasion, had no practical impact, and it was roundly ignored in Russia’s state-controlled media. But it was striking in its very existence, showing that despite the Kremlin’s extraordinary crackdown on dissent, Ukraine’s counteroffensive successes have left opponents of President Vladimir V. Putin newly emboldened — and his supporters looking for someone else to blame.

Pro-war commentators and politicians have pointed to the military leadership or senior officials, saying they have not waged the war with sufficient decisiveness and competence, or have not delivered all the facts to Mr. Putin. Longtime Kremlin critics have seized on that discord, and Russia’s setbacks at the front, to take the risk of speaking out against Mr. Putin.

“There is now hope that Ukraine will end this war,” said Ksenia Torstrem, a member of a municipal council in St. Petersburg who helped organize the petition and called Ukrainian advances an “inspiring factor” for it. “We decided we needed to put pressure on from all sides.”

On Russian state television, where criticism of the Kremlin is rare, supporters of the war are increasingly pointing fingers over what they cast as a disorganized and insufficiently concerted invasion; others are raising the idea of suing for peace. With anger spreading over the embarrassing withdrawal of Russian troops from more than a thousand square miles of northeastern Ukraine, one senior lawmaker said in an interview that an “urgent adjustment” to the war effort was needed.

In a phone interview on Monday, that lawmaker, Konstantin F. Zatulin, a senior member of Parliament in Mr. Putin’s United Russia party, laid out the stakes.

Mr. Zatulin described the retreat by Russian troops as doing “very serious damage to the very idea of this special military operation,” using the term that the Kremlin has adopted for the war. But he also cautioned that if criticism of the war effort from across the political spectrum spirals out of control, it could lead to unforeseen consequences, citing the Russian Revolution of 1917 and the Soviet collapse of 1991.

“It must be underlined that this criticism should not go overboard,” he said. “Otherwise, it could spark an uncontrollable reaction.”

Mr. Zatulin insisted that any optimism by people hoping that Mr. Putin would be toppled was “very much premature.” Ukraine’s successes, he said, might prompt the Kremlin to escalate its war effort to try to deliver Ukraine a decisive defeat, though he added that he did not expect this to mean “nuclear war.”

“What now appears to some to be the success of the Ukrainian side could in fact lead to the last drop that will lead to the beginning of a war for real,” Mr. Zatulin said. “Given that Russia truly did not use the full force of its abilities, nothing remains to be done other than to demonstrate this force.”

There is no evidence that Mr. Putin’s hold on power might be weakening, and the Kremlin on Monday said the invasion would “be continued until the original goals are achieved.”

Still, there were gathering signs that Russia’s elite was unsettled by the army’s retreat and uncertain how to proceed.

A member of the lower house of Parliament, Mikhail Sheremet, told a Russian news outlet that the military would not succeed in Ukraine “without a full mobilization.” It was an implicit criticism of Mr. Putin’s refusal to carry out a nationwide draft, a step that Russian proponents of an escalated war effort have long been demanding.

The leader of a pro-Putin party, Sergei Mironov, praised the strikes against Ukrainian infrastructure targets Sunday night that left parts of the country without power, but complained that they “should have been carried out two to three months ago.”

And on the social network Telegram, where pro-war Russian military bloggers have gained huge followings, the grumbling also continued. “Stop whining,” Yevgeny Poddubny, a war correspondent for Russian state television, posted, referring to those who were worried about an escalating war.

But a senior member of the upper house, Andrei Klimov, tried to push back against the voices calling for all-out war, telling reporters that he saw no “necessity” for a mobilization or for martial law to be declared.

Opponents of Mr. Putin have been heartened by the discord.

“Many have the hope that something will finally break,” Ivan I. Kurilla, a historian at the European University at St. Petersburg and a critic of Mr. Putin, said in a phone interview. “We are probably wrong, it’s probably not yet time, but since everyone has been waiting for half a year for something to crack, this hope is very strong.”

After the invasion in February, Mr. Putin led the most intense crackdown on dissent since taking power two decades ago, signing a censorship law that made any criticism of the war effort — or even calling it a war rather than a “special military operation” — a potential crime. Thousands of journalists, activists and others fled the country, while just about all the prominent independent news media outlets still operating inside Russia were forced to shut down. Leading opposition figures who refused to flee were jailed.

So when a group of municipal council members from Mr. Putin’s home city of St. Petersburg published a statement calling for the president to be removed from office for treason last week, it was a shocking move in an environment in which fear of imprisonment has driven almost all criticism of Mr. Putin underground.

Some of those council members now face fines for “discrediting” the military and government, but in Moscow, members of another municipal council followed suit in calling for Mr. Putin to resign. And over the weekend, Ms. Torstrem, the St. Petersburg representative, wrote to fellow opposition-minded local deputies in a Telegram chat group: “I also want to do something.”

She was convinced to speak out, she said, both by colleagues who had already published anti-Putin statements and by the military advances of Ukrainian troops. She also noted the unhappiness in the pro-Putin camp, saying it put the Kremlin in a particularly delicate spot.

Ms. Torstrem, who is 38, helped draft the petition issued Monday calling on Mr. Putin to step down. She was careful not to mention the war, to avoid making any of the signatories vulnerable under the laws that criminalize criticism of it. The petition said only that Mr. Putin’s actions “do harm to the future of Russia and its citizens.”

The petition had 19 signatories from Moscow and St. Petersburg when she published it on Twitter Monday morning. By the end of the day, the number had grown to more than 40, including municipal representatives from the remote city of Yakutsk in Siberia and from Samara on the Volga River.

She acknowledged that it was unclear how, in practice, the petition might help precipitate Mr. Putin’s resignation. But one signatory, Vasily Khoroshilov, a municipal deputy in Moscow, said the idea was to send a message to powerful opponents of Mr. Putin that they would have support among the Russian public.

“The radical patriots have also started to doubt the correctness of the path that is being followed,” Mr. Khoroshilov, 38, said in a phone interview. “Some forces in the highest echelons of power might take some kind of decisive action if they see support among the people.”

Mr. Putin’s core supporters appear to be focused on the notion that any problems in the war are not his fault, but that he was being misled by senior officials or the military leadership.

That was the message sent by Ramzan Kadyrov, the strongman ruler of the southern Russian region of Chechnya. He posted a rambling voice message to his Telegram account over the weekend and warned that if the military did not change its strategy “today or tomorrow,” he would be forced “to speak to the Defense Ministry’s leadership and the country’s leadership to explain to them the real situation on the ground.”

Mr. Zatulin, the senior lawmaker, said that many in Russia believed that “Putin was wrongly informed and doesn’t know everything, that he was deluded.”

“The president himself maintains his authority and is the foundation of stability at this moment,” Mr. Zatulin said.

But, he cautioned, “it’s clear that any system has its limits.”

How such a claim could be made just day after election: Mamata questions Shah’s...

Covid-19: Biden-Harris jolted into action after criticism of silence over India's plight