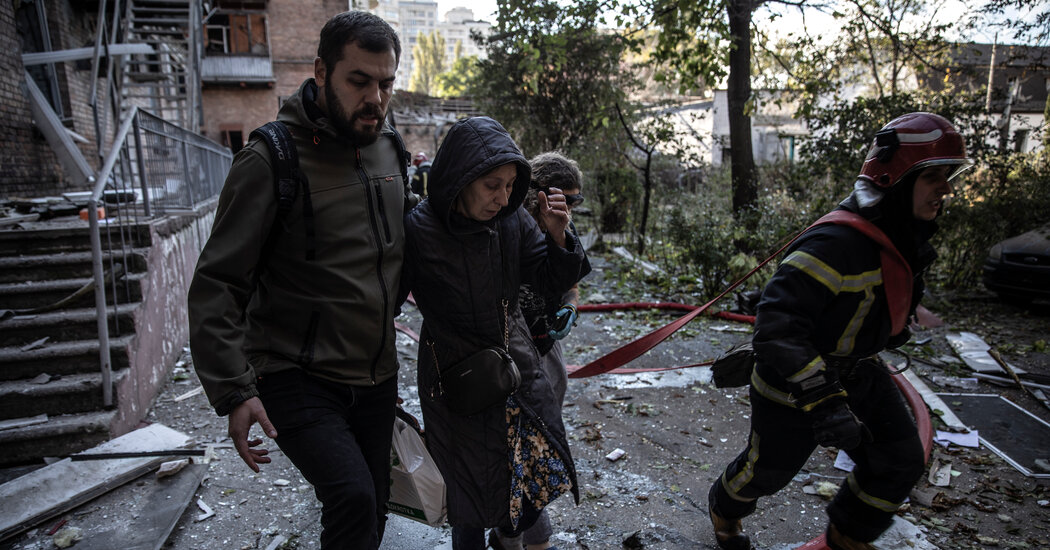 MOSCOW — In the Russian capital, there was little awareness of the missile strikes that targeted Ukraine on Monday morning.

Most people who were asked by a reporter for The New York Times for a reaction to the strikes said they didn’t follow the news and didn’t know what had happened. People soaked up the sun in the central Tsvetnoy boulevard, a chic neighborhood in the capital. Many Muscovites were getting on with their lives, rushing to work or appointments. Outside an expensive shopping mall selling designer clothes and cosmetics, a woman wearing a black furry hat posed for a photo.

One man, who like many of those interviewed declined to share even his first name, said he had heard there was “some shelling” in Ukraine but hadn’t sought out more information.

Vladimir, a 37-year old army veteran who works in construction, cheered the destruction in Ukraine, calling it “just a little warning shot,” and said he hoped it would escalate further. But he said Russia real enemy was Ukraine’s ally the United States.

“It is important to strike not Ukraine — because it is a dependent country that isn’t guilty of very much — but directly on America, because America is in charge of everything and is destroying everything,” he said. “They cannot attack Russia directly, which is why they are using different countries” such as Ukraine, he said, repeating an argument that Mr. Putin has made.

Some younger Russians expressed sadness about the missile strikes in civilian areas, but were not ready to put the blame squarely on the Kremlin.

“It is bad when people are killed for any reason,” said Sasha, 19, a university student in psychology. Still, she went on, “In any fight, both sides are responsible.”

Several people said they hoped the war would end soon, although they did not assign blame.

“I feel like I am in a trance, in shock,” said a woman who gave her name as Ekaterina, 34. She said she was frustrated at the West’s punishment of Moscow with sanctions and isolation.

“It’s all like a bad dream, and we don’t know how to keep on living,” she said. “We are all people without a future.”

But she also said she had no idea how to change anything inside Russia because she had “lost faith in protests a long time ago.”

West Point Has a K.K.K. Plaque Mounted Above Entrance to Science Hall