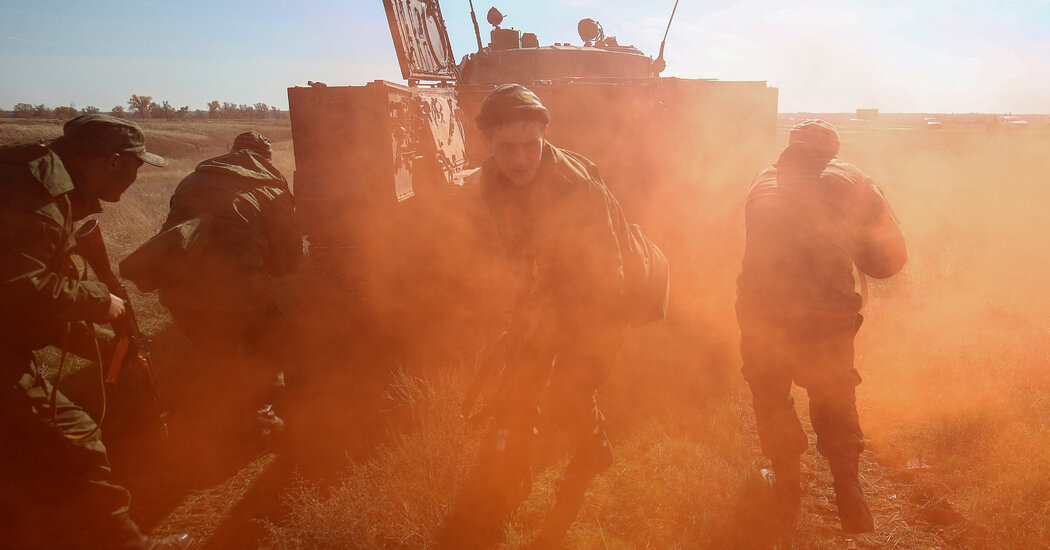 Russia’s defense minister, Sergei K. Shoigu, said on Friday that the target of drafting 300,000 reservists to replenish Moscow’s forces in Ukraine had been met, declaring the end of a recent draft that has been marred by protests, chaotic bureaucracy and a lack of proper training.

Speaking at a meeting with President Vladimir V. Putin, Mr. Shoigu said that the Defense Ministry had stopped sending enlistment notices and there were no plans for further drafts.

The Kremlin’s announcement that the draft was over appeared to underscore its eagerness to present a semblance of normalcy for Russians, which has been a key strategy to maintain passive support for the war. Reservists being called up brought the war ever closer to ordinary Russians, and the initial announcement of a partial mobilization in September sent shock waves across Russia and spawned dissent across the country.

Mr. Shoigu said that 82,000 troops had already been sent to Ukraine, with about half of them involved in fighting. The rest are currently undergoing training, he added, according to a readout of the meeting provided by the Kremlin. The ministry will continue to accept volunteers, he said.

The defense minister’s statements were impossible to verify. The Kremlin has been known to put out deceptive misinformation about the war.

Still, Ukrainian military officials say they have seen new recruits show up on the battlefield in the south and east. On Friday, Ukrainian officials said that Moscow was continuing to add soldiers for the defense of the strategic southern city of Kherson, noting that roughly 1,000 newly mobilized troops have recently arrived. Despite Mr. Shoigu’s remarks, the mobilization will not formally end until Mr. Putin signs a decree declaring it, which has not yet happened.

The two men spoke on Friday at Mr. Putin’s residence outside of Moscow. At the meeting, Mr. Putin also made a rare acknowledgment that the war in Ukraine had revealed the need to make improvements in the Russian military. He told Mr. Shoigu that there was a need “to make corrections” in the design of the Russian army and asked the defense minister to quickly prepare the “necessary decisions.”

Announced by Mr. Putin in September, the draft provoked an exodus of Russian men. Thousands panicked and tried to flee the country, clogging border crossing points with neighboring countries, and forcing many to leave their jobs and families.

Despite Mr. Putin’s pledge that the draft would mainly target people with previous combat experience and that there would be proper training ahead of deployment to Ukraine, in reality at least some drafted men had never served in the army and were sent to battle just weeks after being called up. Russian news websites reported that some recruits had died on the battlefield shortly after the mobilization was announced.

On Friday, Mr. Shoigu acknowledged that there had been problems with “various supplies and different types of allowances” at the initial stage of the draft. Mr. Putin said that “necessary conclusions need to be made” and that the work of military enlistment offices “needs to be modernized.”

“Today, the most important thing is equipment, training, coordination and everything related to making people feel confident if they need to take part directly in combat operations,” Mr. Putin said.

While many Russian regions have announced that they have fulfilled their draft quotas, there has not yet been a rush of Russian men returning home from abroad. That could be out of concern that the Kremlin might announce a new wave of mobilization: Military experts have pointed out that 300,000 men — many of them untrained and ill-equipped — might not be enough to tilt the military balance in Russia’s favor in Ukraine.