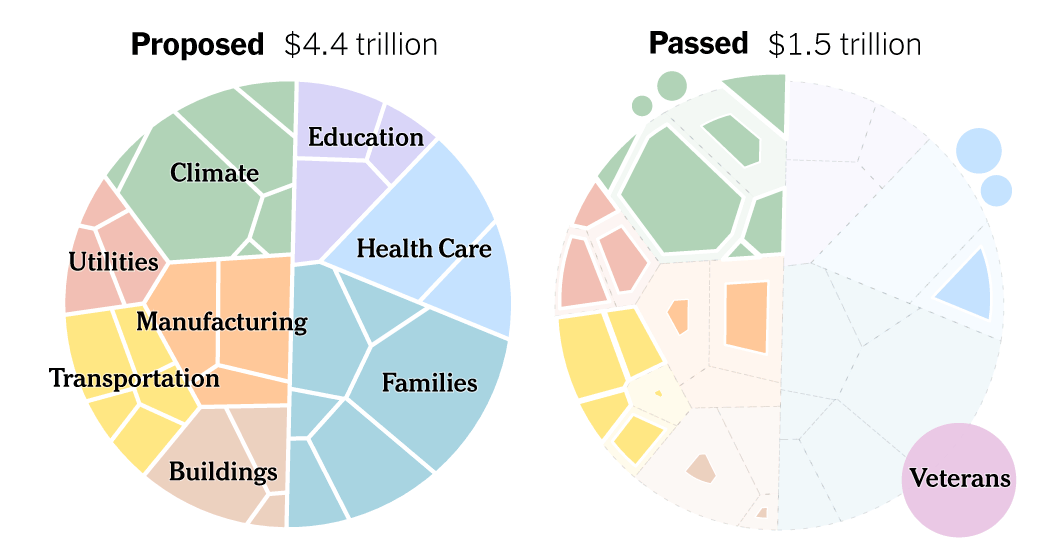 The first two years of the Biden administration have included huge legislative victories: a major bipartisan infrastructure deal, a technology bill, a veterans’ health bill, a gun safety bill, and a package of new investments in climate and health care.

Of course, President Biden didn’t get everything he wanted; no president does. Even with these major bills, he has fallen substantially short of some of his legislative goals.

With the midterms less than three weeks away, The Upshot examined the president’s policy goals and Congress’s successes in previously unreported detail. We matched every single line of spending and revenue in the jobs and families plans from Mr. Biden’s 2022 budget with cost estimates for the five large policy bills passed by Congress in the last year.

Our analysis was focused on legislation intended to achieve long-term policy changes, and does not include the $1.9 trillion in Covid stimulus passed by Congress in March 2021, which primarily funded short-term relief programs.

Here’s what we found:

More new programs were achieved with Republicans than without them. In a period often marked by partisan division, it is notable that most of the spending measures were passed with Republican help. The bipartisan nature of the bills reflects in part Mr. Biden’s skills as a dealmaker and congressional Democrats’ inability to agree on major parts of the agenda.

Four of the five major bills – the infrastructure bill, CHIPS, the PACT Act and the Safer Communities Act – were bipartisan.

But the Inflation Reduction Act, which represents about a third of the spending, was passed by Democrats alone. The expanded health care subsidies and most of the carbon emission reduction plans were achieved by party-line vote — as were the vast majority of the new taxes and spending cuts that help offset new spending. That bill was smaller than Mr. Biden and many Democrats had hoped. Joe Manchin, a Democratic senator from West Virginia, opposed its initial scope and some of its policy particulars, limiting what Democrats could achieve alone.

Most of the policy proposals focused on equity were cut substantially or entirely. Cuts included programs designed to reconnect communities divided by roadways; investments in low-income housing; and funding for historically Black colleges and universities. But the Inflation Reduction Act did include funding to prioritize developments in low-income communities.

Building physical infrastructure was a major focus. There is substantial investment in funding for roads, bridges, airports and computer chip manufacturing, as well as tax credits that will encourage companies to build factories that manufacture technology such as batteries and solar panels. These were areas with a lot of bipartisan support — in part because legislators like to campaign on tangible, visible projects in their districts.

Mr. Biden wanted to give a lot of money directly to people and social services, but the legislation mostly funds corporations and building projects. Much of the legislative success was in infrastructure and industrial policy, and most of the administration’s goals that went unmet were in programs that would have directly benefited individuals. Of the social service spending that did pass, about 60 percent was for veterans.

Some of the corporate spending will benefit individuals in the form of jobs or lower energy costs, for example.

But under the administration’s original plans, about half of the proposed spending, or around $2 trillion, would have gone directly to social services or to households through tax credits, expanded health insurance and educational grants.

The (partial) funding for new programs changed a lot. Democrats weren’t able to pass major corporate tax increases or higher taxes on the wealthy as part of the Inflation Reduction Act, due largely to the resistance of the Arizona senator Kyrsten Sinema. Instead, Congress created some new tax policies, and also found substantial savings from policies to lower prescription drug prices in Medicare.

Democrats may lose control of one or both chambers of Congress next month, but the Biden administration hopes to pass more legislation as long as the party retains power. The White House is still pushing a more expansive child tax credit that was not included in the Inflation Reduction Act.

The differences between the original Biden agenda and the spending and revenues that were passed into law show how much Congress has achieved so far, and where horse trading, compromise and other political constraints have pared back initial ambitions.

Here’s a detailed look at what Mr. Biden wanted and what he got:

On climate, the Biden administration got much of what it wanted. The bills included substantial spending on climate resilience and incentives to manufacture low-carbon technologies. The majority of the funding came from the Democrats’ Inflation Reduction Act, which estimates show will help lower greenhouse gas emissions by about 40 percent below 2005 levels by 2030. But the bipartisan infrastructure bill also included money for electric vehicle charging, low-emission school buses and other climate-related projects.

On physical infrastructure, there was major new spending on roads, bridges, water, rail, airports and broadband from the infrastructure bill.

On housing and job training, there were significant reductions. The administration’s blueprint included tens of billions of dollars for affordable housing, for example. Only $1 billion was ultimately passed.

On health care, there were some victories for the president — and much trimming. Congress did not expand Medicare benefits to include vision, hearing and dental coverage, and it did not expand insurance coverage to poor adults in states that have not expanded Medicaid. The administration also lost in its $400 billion proposal to expand access to home health care and to reduce reliance on nursing homes for Americans who need long-term care.

But Congress did pass legislation to make prescription drug coverage in Medicare cover more drug costs, and to temporarily expand subsidies for Americans who buy their insurance on the Affordable Care Act marketplaces. The Bipartisan Safer Communities Act, a gun safety bill, included new spending for mental health services in schools and at community health centers.

A major part of the original agenda, policies meant to support families and caregivers, was completely eliminated. The packages that became law did not include subsidies for day care, paid leave or a child tax credit aimed at reducing child poverty.

The family programs were eliminated largely because of concerns from Mr. Manchin about the overall size of what became the Inflation Reduction Act.

Also missing is the entire education agenda, including funding for free community college and universal pre-K. The administration is, however, aiming to achieve student debt forgiveness and reform loan repayment through executive action. That plan is estimated to cost around $400 billion.

*Passed spending includes both policies proposed by the Biden administration and those added later.

The gap between the administration’s vision and Congress’s achievements is even bigger on revenue than it is on spending. In his original agenda, Mr. Biden proposed raising nearly $3 trillion through tax rate increases on corporations and wealthy Americans, in addition to hundreds of billions more through increasing the Internal Revenue Service’s enforcement of tax laws.

*Passed revenue includes both policies proposed by the Biden administration and those added later.

Democrats managed to pass only a small share of those proposals. The administration could not win support for a 28 percent corporate tax rate, a global minimum tax rate or an increase in taxes on the richest Americans. Ms. Sinema, whose vote was needed for the package, opposed several tax increases. Instead, Congress passed a new tax on corporations that buy their own stock, and a new minimum tax rate for corporations earning more than $1 billion a year.

The president had also called for policies that would lower Medicare’s spending on prescription drugs. Those proposals were not included as line items in his budget, but versions of these policies did make it into the Inflation Reduction Act and account for a substantial portion of the savings in the bill.

Request submitted towards Tweets Indian with regard to non-compliance along with brand new THIS...

India gets 2 COVID vaccines: What happens next?