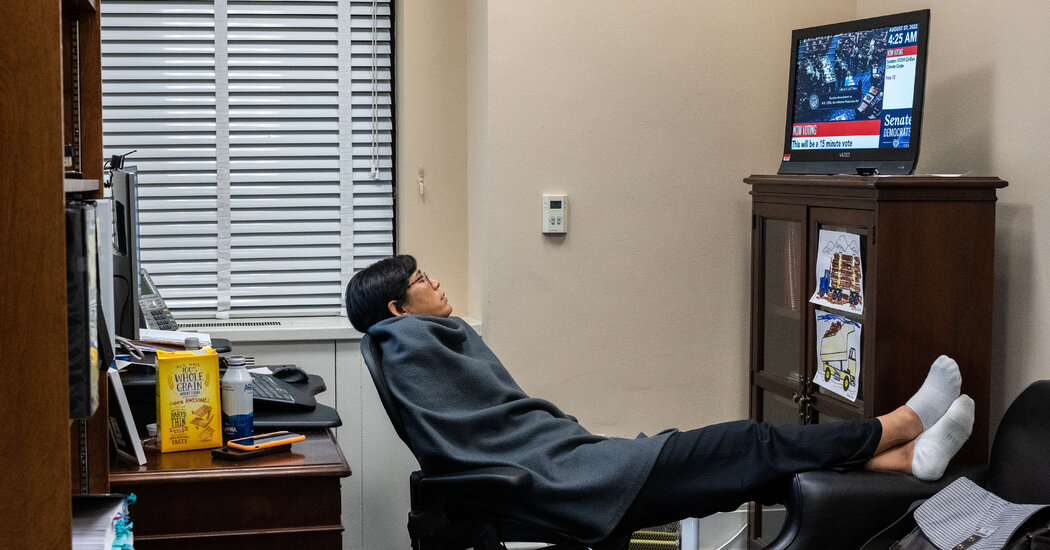 Bleary-eyed senators went through a marathon series of votes at the Capitol that is the final step before passing Democrats’ climate, energy and tax package.

WASHINGTON — A bleary-eyed Senator Joe Manchin III, the West Virginia Democrat who brokered the climate, health and tax deal that was on a glide path to passage within hours, sat silently at his desk in the Senate chamber around midnight on Saturday, gazing blankly into the middle distance as he munched on M&Ms.

A triumph was nearly at hand on a substantial piece of Democrats’ domestic agenda — but first, Mr. Manchin and his colleagues would have to pull an all-nighter, fueled by junk food and caffeine, perhaps some liquor and plenty of politically charged speeches, as they debated and voted on a rapid-fire series of nonbinding amendments.

The vote-a-rama (yes, it is actually called that), a familiar but reviled ritual for the octogenarians and elders who make up the Senate, began late Saturday night and stretched into Sunday morning. It was a final chance for Republicans to try to derail Democrats’ top legislative priority — or at least to lob political attacks against them on its path to passage — and a test of Democratic resolve to preserve their delicate compromise.

It was also the ultimate display of senatorial weirdness and dysfunction — a time-consuming exercise that has little impact on policy but keeps senators up through the night, ending only when they run out of steam for offering more amendments. They were still at it midmorning on Sunday after about 12 hours, with no certain indication of when they would finish.

“You know how much I’ll miss vote-a-rama?” said Senator Patrick J. Toomey, a Pennsylvania Republican who is retiring this year. “The answer is not at all.”

The vote-a-rama is part of the arcane process known as reconciliation that Democrats are using to speed their sweeping climate, energy and tax package through Congress. It shields certain budget-related legislation from a filibuster, allowing it to pass with a simple majority rather than the normal 60 votes needed to avoid a Republican filibuster.

But it also allows any senator to offer any proposal to change the legislation when it reaches the floor. That gives rise to all manner of political point-making — in this case, just a few months before midterm elections.

In anticipation of the theatrics, senators stocked their offices with blankets, snacks and energy drinks. Takeout food containers could be spotted throughout the Capitol hallways on Saturday night. By 8 a.m. on Sunday, more than eight hours after it began, senators reclined in their chairs and Senator Jeff Merkley, Democrat of Oregon, let out a yawn and rubbed his eyes.

It was the fourth vote-a-rama for the current Congress, with previous episodes each drawing about 40 votes. This time as in the past, Democrats were holding together to fend off Republican efforts to torpedo their bill, defeating amendments along party lines.

They included an attempt to slash the funding for the Internal Revenue Service and the Environmental Protection Agency. Republican senators also tried and failed to add oil and gas lease sales in certain states.

In a bid to squeeze Democrats on a politically potent issue, Republicans forced a vote taking out a tax on gas and energy companies, which they argued could drive the country into a recession and raise prices at the pump.

Republicans succeeded in making one change to the bill, striking a provision that would have capped insulin prices at $35 per month. Democrats left it in the legislation even amid concern that it could violate reconciliation rules, effectively daring Republicans to demand the removal of a popular measure and go on the record voting to do so. (The action left the cap intact for Medicare patients, millions of whom have diabetes and could still benefit from it.)

Members of the Democratic caucus also used the process to make political points. Senator Bernie Sanders, 80, the Vermont independent and Budget Committee chairman, offered up several proposals throughout the night to express his disappointment over how much the bill had been scaled back.

“This could be actually the very last time in a long time that people are going to have the opportunity to vote” on progressive issues, Mr. Sanders said on Sunday morning at about 8:30, his eyes bloodshot after a sleepless night.

But Democrats were determined to resist the temptation to alter the legislation even slightly, fearful of losing the unanimous support of their caucus for a fragile compromise.

“This one is so delicately balanced that ANY amendment, even a ‘good’ one, risks upsetting the balance — so look forward to a lot of ‘no’ votes on things we would ordinarily want,” Senator Sheldon Whitehouse, Democrat of Rhode Island, explained in a Twitter post.

The ongoing coronavirus pandemic added yet another element of risk to the session, as the 100 senators — the oldest class in recent history — gathered for hours on end to cast votes in a confined indoor space. With their bare-minimum margin of control in the 50-50 Senate, Democrats could not afford even one illness that could deprive them of their majority.

“With the way Covid numbers are now, it’s likely one of those individuals could have Covid,” said Kirsten Coleman, an assistant research professor at the University of Maryland’s School of Public Health, who noted that the event created the perfect conditions for a superspreader event.

“I would be especially cautious because there is an older age group, which is at higher risk for more severe illness if they do catch Covid,” she added.

Senator John Cornyn, Republican of Texas, wondered aloud whether Democrats might have opted not to test for Covid to avoid imperiling their bill, saying that doing so for the voting marathon could endanger “not only each other, but the staff members, the Capitol Police, the custodial staff, food service workers and countless others who keep this institution running.”

Senator Dianne Feinstein, 89, said she was not especially concerned, as she planned to be masked and take necessary precautions. She added that she had been testing in the lead-up to the weekend.

Senator Brian Schatz, Democrat of Hawaii, said he resumed wearing N-95 masks last week because he “didn’t want to get Covid and blow this.”

Still, business carried on as usual with mostly unmasked lawmakers huddled on the Senate floor instead of isolated in their personal offices, as many did in vote-a-ramas last year.

The vote-a-rama brought Senator Patrick Leahy, 82, Democrat of Vermont, back to the Capitol for the first time since his hip surgery last month. An aide escorted the senator, who serves as the president pro tempore, through the Capitol in a Batman-themed wheelchair.

Senators prepared for the long evening as they normally did for vote-a-ramas: naps and stocking their offices with comfort foods and other items.

Senator Ben Sasse, Republican of Nebraska, said on the Senate floor that he had caught two hours of shut-eye before the fast-paced votes began.

Ms. Feinstein said she had Mounds bars and soft drinks readied; Senator Tina Smith, Democrat of Minnesota, had her beloved Atomic Fireballs in her purse for easy access; and Senator Bob Casey, Democrat of Pennsylvania, stocked cotton candy- and Hot Tamales-flavored Peeps, a product of his home state, for his staff to enjoy.

Mr. Schatz stocked his office with extra battery packs for his cellphone, a hoodie, drinks “and a little booze,” he said.