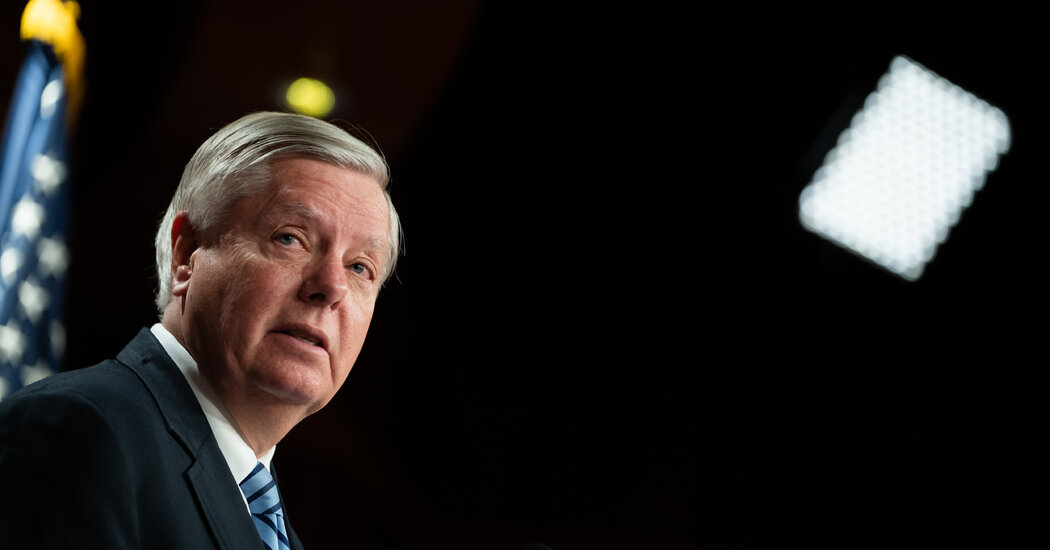 ATLANTA — Senator Lindsey Graham asked the Supreme Court on Friday to stay a lower court’s order that would force him to testify before a special grand jury investigating efforts to overturn former President Donald J. Trump’s election loss in Georgia.

The appeal by Mr. Graham, the South Carolina Republican and Trump confidant, is the latest in a protracted legal fight that he has been waging to defy a subpoena requiring him to answer questions before the special grand jury in Atlanta. Dozens of witnesses have already testified in the secret proceedings. Some, including Rudolph W. Giuliani and several other lawyers aligned with Mr. Trump, have tried unsuccessfully to avoid traveling to Atlanta to do so.

But none has fought as long or as hard as Mr. Graham, who was subpoenaed in July. Soon after, he had the matter moved to the federal court system, arguing that forcing him to testify would raise constitutional issues. He pointed to the Constitution’s Speech and Debate Clause, which says that members of Congress cannot be questioned on matters pertaining to their legislative duties.

On Thursday, the U.S. Court of Appeals for the 11th Circuit in Atlanta rejected the argument that the Speech and Debate Clause fully shielded Mr. Graham from having to testify. Mr. Graham responded with an emergency application on Friday, asking the Supreme Court for a stay while he appeals the ruling, and, if necessary, a ruling enjoining the special grand jury from questioning him until the appeal is resolved. The filing notes that Mr. Graham was issued a fresh subpoena on Friday compelling him to testify on Nov. 17.

“Without a stay, Senator Lindsey Graham will soon be questioned by a local Georgia prosecutor and her ad hoc investigative body about his protected ‘Speech or Debate’ related to the 2020 election,” Mr. Graham’s lawyers wrote in the filing. “This will occur despite the Constitution’s command that Senators ‘shall not be questioned’ about ‘any Speech or Debate.’”

What are prosecutors looking at? In addition to Mr. Trump’s call to Mr. Raffensperger, Ms. Willis has homed in on a plot by Trump allies to send fake Georgia electors to Washington and misstatements about the election results made before the state legislature by Rudolph W. Giuliani, who spearheaded efforts to keep Mr. Trump in power as his personal lawyer. An election data breach in Coffee County, Ga., is also part of the investigation.

Who is under scrutiny? Mr. Giuliani has been told that he is a target of the investigation, and prosecutors have warned some state officials and pro-Trump “alternate electors” that they could be indicted. Senator Lindsey Graham, Republican of South Carolina, has been fighting efforts to force him to appear before a grand jury, but a federal appeals court ruled that he must testify.

The potential charges. Experts say that Ms. Willis appears to be building a case that could target multiple defendants with charges of conspiracy to commit election fraud or racketeering-related charges for engaging in a coordinated scheme to undermine the election.

Prosecutors in Georgia are particularly interested in asking Mr. Graham about calls he made to Georgia’s secretary of state, Brad Raffensperger, shortly after the 2020 election. The judge overseeing the case in Fulton County, Ga., has written that during those calls, Mr. Graham “questioned Secretary Raffensperger and his staff about re-examining certain absentee ballots cast in Georgia in order to explore the possibility of a more favorable outcome for former President Donald Trump.”

In January 2021, Mr. Trump called Mr. Raffensperger and asked him to help “find” 11,780 additional votes that would swing the Georgia outcome his way. The call was one of a number of aggressive efforts by Mr. Trump and his team to overturn his electoral loss in Georgia; many of those efforts are subjects of the investigation, which is being headed by Fani T. Willis, the Fulton County district attorney.

Ms. Willis, a Democrat, has said that she is looking into the possibility of a broad racketeering or conspiracy case with multiple defendants.

Mr. Graham’s lawyers have argued that he made the calls to Mr. Raffensperger because he needed to look into allegations of voting irregularities in Georgia before Congress was to vote in January 2021 to certify that President Biden was the legitimate winner of the presidential election. The lawyers have also said that Mr. Graham was reviewing election-related issues in his role as chair of the Senate Judiciary Committee at the time.

If Mr. Graham were to testify, his lawyers argued in the filing, “it will occur in state court, without the consent of the federal government. And it will undisputedly center on Senator Graham’s official acts — phone calls he made in the course of his official work, in the lead-up to the critical vote under the Electoral Count Act.”

The lawyers wrote that after the phone calls to Mr. Raffensperger, Mr. Graham “relied on the information gained from the calls” to certify Joseph R. Biden Jr. “the legitimate President of the United States,” and to co-sponsor legislation to amend federal elections law — all protected legislative work.

A statement from his office released Friday afternoon said: “Senator Graham filed with the Supreme Court today to defend the Constitution and the institutional interest of the Senate.” It added, “If left to stand, the recent ruling would significantly impact the ability of senators to gather information in connection with doing their job.”

Mr. Graham’s lawyers also argue in the filing that he should be protected from testifying under the doctrine of sovereign immunity, which shields governments from legal action taken against them without their express permission.

In early September, Judge Leigh Martin May of the U.S. District Court for the Northern District of Georgia ruled that the Speech and Debate Clause indeed shielded Mr. Graham from questions related to his “investigatory fact-finding” efforts. But the judge ruled that Mr. Graham would have to answer questions about other topics, including communications he may have had with the Trump campaign and his “alleged efforts” to encourage Mr. Raffensperger or others to “throw out ballots or otherwise alter Georgia’s election practices and procedures.” On Thursday, the 11th Circuit agreed.

A spokesman for the Fulton County district attorney’s office declined to comment Friday.

As Jan. 6 Panel’s Evidence Piled Up, Conservative Media Doubled Down

Delhi Metro crucial upgrade: Frequency of trains to be altered during weekend curfew