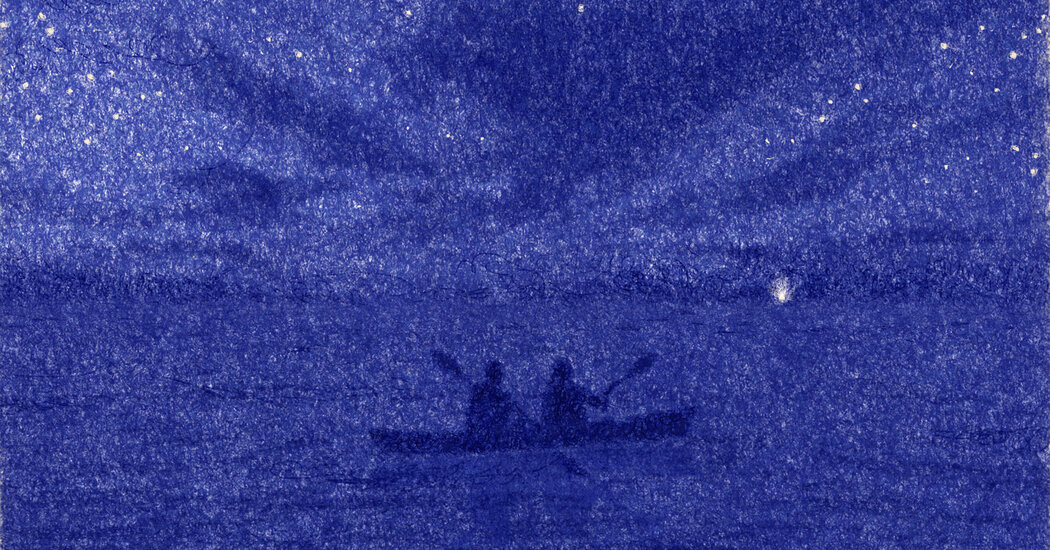 If you saved me and my sister on a cold, rainy night in Alaska 34 years ago, I would like to thank you.

There’s a story I tell my sons to remind them that, despite much evidence to the contrary, humans have the capacity to be amazingly kind.

The story takes place in 1988, when I was in college and on a summer trip with my family to Alaska. One afternoon, my sister Beryl and I rented a kayak, just the two of us city kids. We set out paddling into the vast waterways of Glacier Bay National Park.

It was gorgeous. No other humans in sight — just mountains and pine trees and the occasional seal poking its nose out of the water.

After half an hour, we turned the kayak around to head back, but unbeknown to us, the tide had changed. The channel we had paddled through had disappeared. We were baffled, lost in the enormous bay. We made a left turn and kept paddling, too afraid to approach the bear-infested land. We sang songs to keep our spirits up, including, perhaps too appropriately, the “Gilligan’s Island” theme.

As the hours slipped by, we could no longer pretend we were on an amusing lark. We kept going without talking, the only sounds the splashes of our paddles and the occasional howl from the land.

It got colder. It began to rain, soaking our T-shirts. We tilted our heads back, mouths open, to get some drops of water. Night fell. We had been eight hours on the water and there was still no sign of other humans. We half-jokingly talked about what our obituaries might say.

Back on land, our parents were having a perfectly rational reaction: They were freaking out. It didn’t help that a park ranger had told them it was quite likely that we had been swept out to sea and had drowned.

Then, sometime around 1 a.m., my sister and I heard voices in the distance. We shouted for help and steered our kayak toward the noise. It turned out to be a group of five men camping on one of the islands, up late having beers.

“Got any cigarettes?” one of them asked when we reached the shore.

These men didn’t complain or scold. They were beyond friendly, giving us dry clothes, water and a tent. Even though it was the middle of the night and they seemed kind of wasted, they schlepped several hundred yards to retrieve the food they’d stored and strung from a tree to keep bears away.

In the morning, Beryl and I arranged rocks on the beach to spell out SOS, like we’d seen in the movies. My parents, who had rented a search seaplane for $360, finally spotted us. My dad greeted us with a typically wry comment, something like, “Did you get a good night’s sleep?” But he and my mom were understandably traumatized. A lifelong stoic, he spoke to a therapist for the first time after that night.

A while ago, I was telling this story to a friend, trying to ward off pandemic despair, when my son Lucas, 14 at the time, said: “If you’re so grateful to those guys, why don’t you go find them and thank them?”

Good question. The next day, I posted an account of what had happened on Facebook, explaining that I was hoping to find our saviors. There were hundreds of responses, with many people providing leads to friends of friends who worked in Alaska in the 1980s. A few people became seriously invested, Googling for hours and calling me to ask questions.

“I can’t believe how kind these people are,” my sister said. “It reminds me of the campers.”

One sleuth said there was a small chance that the park still had a case incident report, and gave me a contact at the ranger’s station. Weeks later, a document popped up in my inbox: three typewritten pages.

Reading the report was a bizarre experience, partly because of the gap between its just-the-facts-ma’am tone and the terror my parents must have felt that night.

“Approximately 19:30, Arnold Jacobs notified the Ranger Contact Station that his son and daughter had not returned,” the report said. The rangers searched by boat, but “darkness halted efforts.” They resumed in the morning but “fog was heavy, limiting distant visibility.”

On Page 3 comes the rescue: “A Doug Rand kayak party of 5 was camping on the northern tip of Kidney Island heard their pleas for help and paddled out.”

Wait. This was big. A name: Doug Rand.

Thus began several weeks of reaching out to every Doug Rand I could find to ask the admittedly odd question of whether they had rescued two shivering youngsters in 1988.

I tracked down Doug Rands via Google, Instagram, LinkedIn and old newspapers. My spreadsheet grew to 82 Doug Rands from all over the country — Virginia, Texas, North Carolina.

I found a Doug Rand who, in 1999, wrote the guidebook “Let’s Go Alaska.” That had to be him! After I emailed him a note, he said sorry, it wasn’t him, but he’d love to keep in touch.

Maybe it was the Doug Rand who had written a short play featuring — this is true — an Esperanto-speaking mime. Sadly, it wasn’t.

In a Santa Cruz newspaper I found a 2000 obituary of an activist named Doug Rand who had protested against beauty pageants and nuclear weapons and had worked with Cesar Chavez. His widow agreed to Zoom with me. She said she didn’t remember him talking about a rescue in Alaska, adding that it did sound like him. She got choked up reminiscing about him, saying he was a generous man who often wore a “Bee Kind” button with a drawing of a bee.

She promised to retrieve his datebooks from storage. A few days later, she called. Sorry. It wasn’t him.

I still haven’t found the right Doug Rand, but I’ve loved the experience of connecting with this cross-section of America, the Doug Rands and the enthusiastic sleuths.

And though any mention of our misadventure still stresses out my parents (they couldn’t bring themselves to read the report), my discoveries have provided them a bit of closure. For instance, one of the volunteer researchers knew a woman who had operated the kayak company in the ’80s. When I spoke with her, she was lovely, and contrite.

“That was so irresponsible of us,” she said.

She told me that the company had changed its policy after our incident and is now more careful about renting kayaks to inexperienced young people.

I told my parents, “Maybe we saved someone from a similar fate, or worse.”

“It’s something,” my dad said.

My research into that night has driven home how lucky we were. As the woman at the kayak company told me, my sister and I had benefited from a series of “minor miracles.” We were lucky we didn’t make a wrong turn that would have sent us into a whirlpool-filled strait, where our kayak could have flipped, dumping us into the hypothermia-inducing water. And we were lucky that these five men had decided to camp on Kidney Island that night — and that they were awake at 1 a.m. and buzzed enough to be making a racket.

I’m still hoping to track down Doug Rand and his fellow lifesavers. I owe them a drink.

Episode is a weekly column exploring a moment in a writer’s life. A.J. Jacobs is the author of “The Puzzler: One Man’s Quest to Solve the Most Baffling Puzzles Ever, From Crosswords to Jigsaws to the Meaning of Life,” and six other books.

Honoured to be named among brilliant writers: ‘The White Tiger’s’ Ramin Bahrani on his...