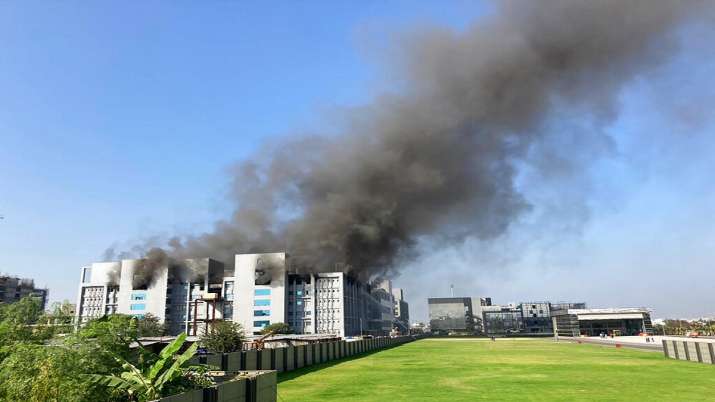 Maharashtra Chief Minister Uddhav Thackeray on Friday visited the Serum Institute of India (SII) where a fire at its semi-ready Manjari complex claimed five lives while inflicting an estimated loss of Rs 1,000 crore to the global vaccine giant.

Thackeray visited the SII facility that was gutted on Thursday and also met the company Chairman Cyrus Poonawalla and his son Adar.

“We have ordered a thorough probe… There cannot be any conclusions till the full investigations are complete and the report is available. Then we will know whether it was an accident or sabotage,” he said.

The Chief Minister said that the Poonawallas have repeatedly assured that there would be no impact on the Covishield vaccine production and rollout which will continue unhindered.

Adar Poonawala said: “The fire has damaged machinery that was being installed for the RotaVirus and BCG Vaccine production here… No actual vaccines are being manufactured here. The extent of the damage is around Rs 1,000 crore.”

The massive blaze ravaged three to four floors of the upcoming facility in Manjari that was scheduled to become operational within a month or so.

The SII said there is no damage to any of the production facilities of the Covishield vaccine that is currently being manufactured at its other plant in Hinjewadi in the city.

The SII has already taken responsibility for five labourers, including 3 migrants, who were killed in the blaze by giving Rs 25 lakh, plus other benefits as per norms, to each of their kin and Thackeray said if anything more was required to be done, the government would consider it.

The Hadapsar police have registered an accidental death due to burning case for the five victims and the Pune Municipal Corporation, Pune Metropolitan Region Development Authority and Maharashtra Industrial Development Corporation launched simultaneous investigations into the fire.