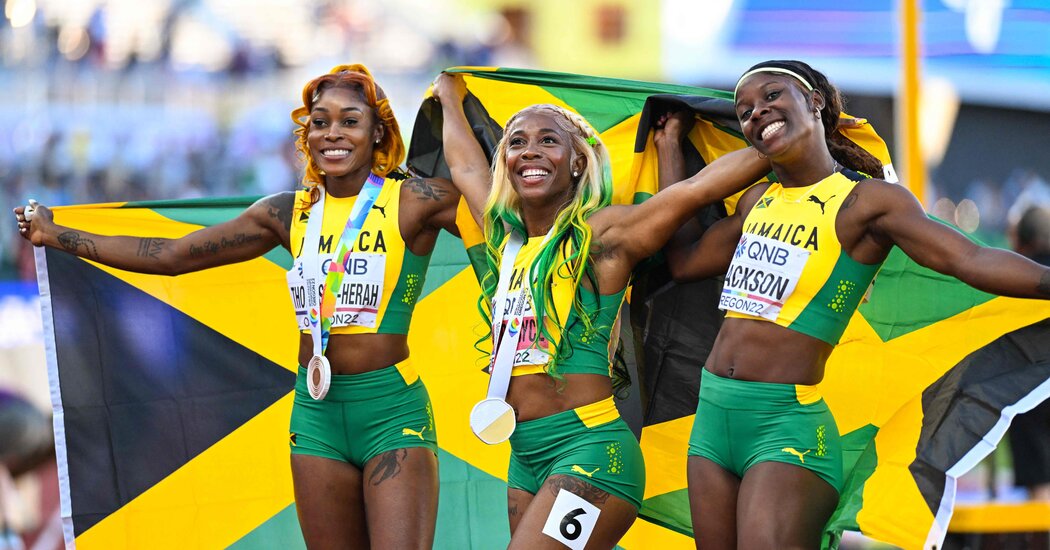 Shelly-Ann Fraser-Pryce of Jamaica raised her right hand with her index finger pointed high as she crossed the finish line at Hayward Field for her fifth world championship in the 100-meter dash. With her blonde and green hair bouncing behind her, Fraser-Pryce finished in 10.67 seconds, a world championship record, dominating a star-studded field that included the two-time Olympic 100-meter champion Elaine Thompson-Herah.

“I can’t even imagine the amount of times I’ve had setbacks and I’ve bounced back and I’m here again,” Fraser-Pryce told reporters. “I continue to remind myself that sometimes it’s not because you don’t have the ability, but it’s the right time. Today was the right time.”

It was an expected Jamaican sweep: Shericka Jackson took silver in 10.73, and Thompson-Herah won bronze in 10.81.

Fraser-Pryce, 35, is one of the most accomplished sprinters of all time, and her success is particularly remarkable because of her longevity. Her career took off with Olympic gold in the 100 in 2008. She has won five of the last seven world titles, and stands as the only person to win more than three in the 100. The closest person to her world championship gold medal count at that distance is Usain Bolt with three. Fraser-Pryce’s world title count might have been greater, but she gave birth just after the 2017 world championships to her son, Zyon, in an emergency cesarean section.

“There were days I did think about whether my body would be able to allow me to put the level of work in to get it done,” Fraser-Pryce told the Telegraph in 2019.

Fraser-Pryce, Jackson and Thompson-Herah have run away from the rest of the world in this event. At last summer’s Tokyo Olympics, the three women held the Jamaican flag and posed for pictures after a sweep of the 100, with Thompson-Herah winning gold in the second-fastest time ever run. It was the fourth straight Olympic gold in the 100 for Jamaican women, dating to Fraser-Pryce in 2008 in Beijing.

Despite Thompson-Herah’s success at the Olympics, she had gone without winning an individual medal in the 100 meters at the world championships until Sunday night’s third-place finish. She did not appear to be in her peak form heading into the meet, and her time of 10.81 seconds was well off her personal best, but she said she was excited to be on the medal stand considering the circumstances.

“I have not been training well,” Thompson-Herah said. “I have been missing a lot of sessions. But I think I am a fighter, and I know how to perform. Tonight wasn’t my best time, but I’m still grateful to be on the podium.”

As for the podium sweep, Thompson-Herah went into the race with the expectations of many spectators: “I knew we were going to be 1-2-3,” she said. “I didn’t know the order.”

Fraser-Pryce, Jackson and Thompson-Herah will now turn their focus to the 200, which begins with preliminary heats in Eugene, Ore., on Monday. A sweep is less likely in the 200, though Jackson is the favorite, having run the fastest time in the world this year at 21.55 seconds. Thompson-Herah won gold in the 200 at last summer’s Olympics, but Jamaica hasn’t won gold in the 200 at the world championships since Fraser-Pryce in 2013.

Dalai Lama gets 1st dose of COVID-19 vaccine, urges people to get vaccinated