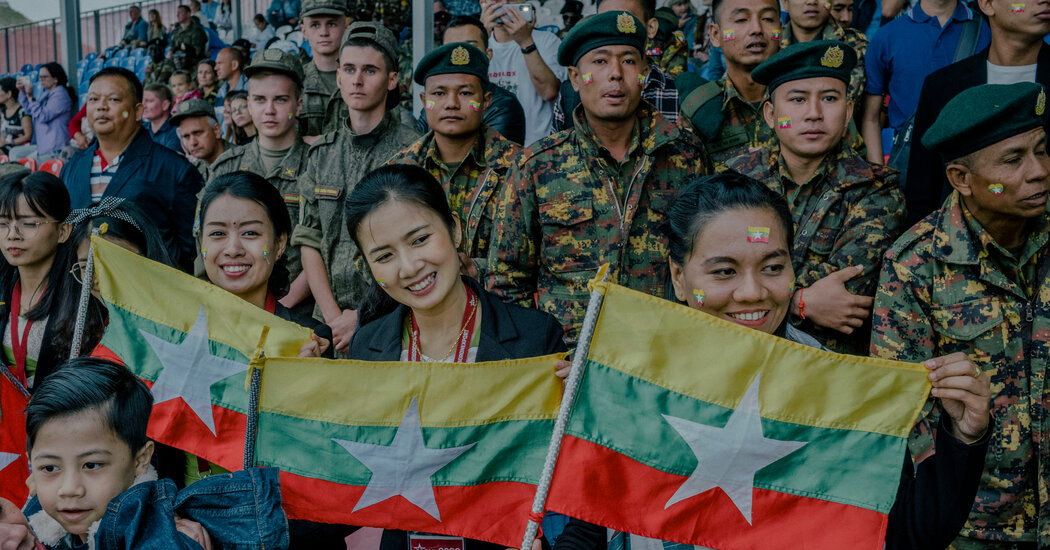 Myanmar gets resources and ammunition, while Russia gets a customer at a time when it is struggling for revenues. Both can use the other to undermine Western sanctions.

Myanmar has been cut off from the West and shunned by its neighbors after its military seized power last year and imposed a brutal crackdown. Even China, its closest ally, has signaled it is not thrilled about the instability.

With few friends left in the world, the junta, desperate for legitimacy, is embracing deeper ties with Russia. It is a relationship of unequals where each side has something to gain. Myanmar gets resources, ammunition, and a powerful partner to back them at the United Nations, while Russia gets another customer at a time when it is struggling to find sources of revenue.

And both can use the other to undermine the Western sanctions imposed on them — Myanmar, for launching a coup, and Russia, for invading Ukraine. In their vision, they are part of a new world order, two countries led by strongmen ideologically opposed to democracy.

Ever since the coup in February of last year, the head of Myanmar’s junta, Senior General Min Aung Hlaing, has been on a charm offensive. He has visited Russia three times, more than any other country. Just days after the war began in Ukraine, his administration was quick to say that Moscow had “done its part to maintain its sovereignty,” the only country in Southeast Asia to endorse the invasion.

It all laid the groundwork for his biggest diplomatic achievement yet: a meeting with President Vladimir V. Putin of Russia.

During that meeting, at an economic forum in Vladivostok last month, General Min Aung Hlaing told Mr. Putin that “Russia has become such a leading country because of your leadership.”

“We see that you’re dealing with world affairs impartially and correctly,” the junta chief said.

In return, the general got oil, an agreement from Russia to explore nuclear energy in Myanmar — and respect.

The Kremlin has referred to General Min Aung Hlaing as the “prime minister,” a post the junta leader gave himself that no other major country recognizes. And last month, Myanmar was invited to become a dialogue partner at the Shanghai Cooperation Organization, an eight-member organization, including Russia, India and Pakistan, that founded by China as a counterweight to Western influence in Central Asia.

“Russia is the last diplomatic resort,” said Aung Thu Nyein, a political analyst at the Institute for Strategy and Policy Myanmar, a research group.

Since the coup, the junta has struggled to find even a modicum of support elsewhere in the world.

The United States and the European Union have imposed sanctions on dozens of top military officials and state-owned enterprises. The 10-member Association of Southeast Asian Nations, which has long maintained a policy of noninterference in each country’s internal affairs, blocked Myanmar from participating in recent leader summits. And the relationship with China, sometimes fraught, has only gotten more complicated.

Both China and Myanmar like to say that their relationship is so close that it’s fraternal, using the Burmese phrase “pauk phaw,” meaning siblings from the same mother. China, along with Russia, have consistently vetoed U.N. resolutions to denounce the military regime.

But the Tatmadaw, as the Myanmar military is known, has also long been suspicious of China, its northern neighbor. Many generals spent most of the 1970s battling communist rebels funded by Beijing. Senior officials in Myanmar have also complained to China that armed insurgents along their shared border are getting Chinese financial and military aid.

The coup, and the instability it has caused, has frustrated China. When China’s foreign minister, Wang Yi, visited Myanmar in July, he snubbed General Min Aung Hlaing, choosing to meet only with the country’s foreign minister, in a departure from the past.

“I would probably characterize the relationship as tepid,” said Ian Storey, a senior fellow with the Institute of Southeast Asian Studies’ Regional Strategic and Political Studies Program. “Min Aung Hlaing has yet to meet a single senior Chinese leader, so that’s very telling.”

Moscow gets something out of the relationship with Myanmar’s junta, gaining another customer for its oil and at least another country that isn’t outraged over its invasion of Ukraine. But Myanmar needs Russia much more.

The Southeast Asian state has been mired by a fuel shortage, compounded by the junta’s mismanagement and the global surge in energy prices. The spokesman for Myanmar’s junta, Zaw Min Tun, said last month that the oil from Russia came “at a cheap price” and that the first 30,000 tons of Russian oil were set to arrive soon in Myanmar. While the proportion is minuscule compared to what Russia has sold to China and India, General Min Aung Hlaing has promised a “continuous purchase” of fuel from Moscow that he would pay for in rubles.

“It shows that this axis of autocrats is a problem for using sanctions as leverage,” said Laurel Miller, the program director for Asia for International Crisis Group.

Russia could also eclipse China as Myanmar’s top supplier of weapons, which have been frequently deployed by the military against civilians since the coup. From 2001 to early 2021, Myanmar bought $1.7 billion of arms from Russia, equal to the amount provided by China over the same period, according to data from the Stockholm International Peace Research Institute.

Myanmar bought an air defense missile system from Russia in 2021, according to data from SIPRI. There were no known figures for weapons imports from China after the coup.

General Min Aung Hlaing has said that he was willing to sign more arms deals, even as there were questions about whether Russia, struggling in its war against Ukraine, would have the supplies. During his recent trip to Russia, he inspected the production of the Russian-made Su-30 fighter jets that are set for delivery to the Myanmar army soon, according to Mr. Zaw Min Tun, the junta spokesman.

“We like it very much,” he said. “We will continue to buy and cooperate more.”

For most of the 2000s, much of Myanmar’s engagement with Russia was limited to arms purchases and military training. But this year marked a higher level of engagement with Moscow. In August, the Tatmadaw took part in the International Army Games in Moscow. A month later, it joined China and India and 11 other countries in Vostok 2022, Russia’s large-scale military exercises in the Russian Far East.

The cooperation has also extended to finance, with the ultimate, if somewhat quixotic, goal of what the junta says is the creation of “a financial system that does not rely on the U.S. currency.”

Last month, Mr. Zaw Min Tun, the junta spokesman, told reporters that in a meeting with Mr. Putin, his country’s officials discussed replacing the use of the dollar with other currencies such as the Chinese renminbi, Indian rupee and the Russian ruble. Myanmar also plans to use a barter system to import fertilizer from Russia, he said.

“Both sides have a real incentive to avoid dollar transactions, and so any trade that could take place that could build up this interdependence, and that helps evade sanctions, would be very important,” said Zachary Abuza, a professor at the National War College in Washington, D.C., and an expert on Southeast Asian politics.

Myanmar will also allow the use of Mir bank cards, Russia’s alternative to Visa and Mastercard, according to Mr. Zaw Min Tun. The sanctions imposed by the West have cut Russia off from the global financial system, and Moscow is scouring the globe looking for more countries to accept their bank cards.

During the most recent trip, General Min Aung Hlaing discussed a host of proposals with Russia, ranging from the easy, like increasing diplomatic cooperation, to the rather improbable, like space technology development in Myanmar.

Returning to Myanmar in late September after his trip together with General Min Aung Hlaing, Mr. Zaw Min Tun told reporters: “The Russian trip was a success for Myanmar. It was more successful than expected.”

“Among Southeast Asian nations, Russia sees Myanmar as the most reliable and trusted country,” he said.

What Time Do the Polls Close? A State-by-State Guide