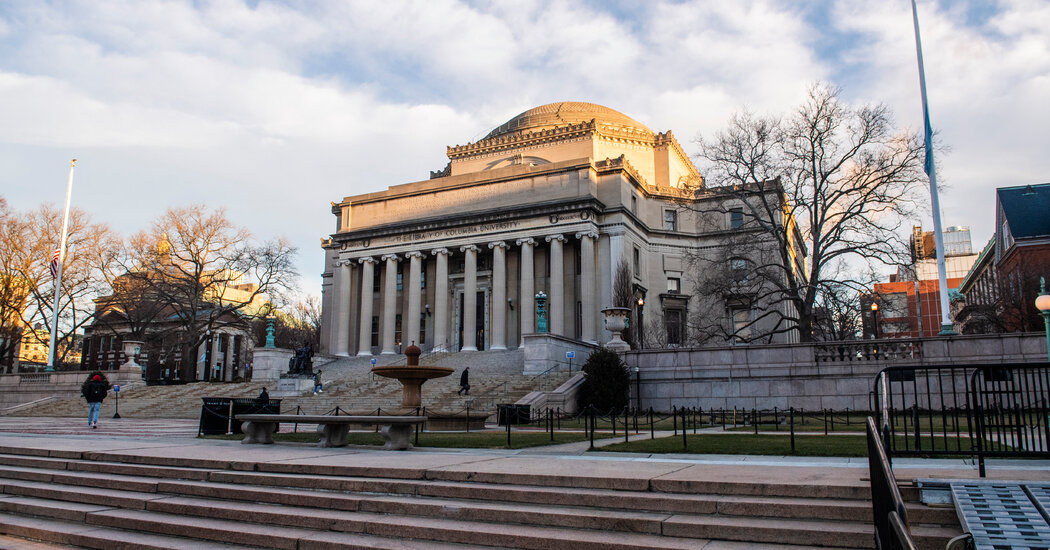 Even in states that protect abortion rights, colleges are proceeding with caution.

Many colleges pride themselves on providing a range of sexual and reproductive health services for their students, including birth control, screenings for sexually transmitted diseases and even insurance coverage to terminate a pregnancy.

What they do not tend to provide is abortion, either by pill or through a procedure. For that, they refer students to other clinics or doctors’ offices.

For some students, that standard of care is no longer good enough, not with the Supreme Court decision to overturn Roe v. Wade. They want colleges to expand access to abortion, reduce the stress and obstacles, and give women more autonomy and control over the process.

The biggest thing on many of their wish lists: medication to end an unwanted pregnancy.

Niharika Rao, a senior at Barnard College in New York who uses they pronouns, said students had demanded that medication abortion be made available on campus: “College student access to abortion is being stigmatized and politicized,” they said.

Medication abortion involves taking two types of pills, federally approved for use within the first 10 weeks of pregnancy. It is different from the morning-after pill, which is more widely available at student health centers and can be taken to block a pregnancy before it begins.

A few colleges, including the University of Illinois Chicago, already provide the abortion pill. The University of Massachusetts Amherst plans to begin offering it in the fall. In California, a new law requires all of the state’s public universities to provide medication abortion on campus by January; some campuses, like in Berkeley, have already begun to do so.

But because of the fluctuating landscape of abortion law, and because of the complicated politics, persuading more colleges to provide medication abortion will be difficult.

Colleges in states with restrictive abortion laws, like Missouri, may not be able to legally offer it. Other universities, especially publicly funded ones in states where laws are in flux, do not want to end up on the wrong side of legislation.

Even in states that protect abortion rights, colleges are proceeding with caution. Providing the abortion pill on campus rather than referring students elsewhere enmeshes colleges in a personal, sometimes emotionally and physically taxing medical decision, according to administrators at several colleges who asked not to be named because of the sensitivity of the issue.

Administrators say that colleges must be prepared for students who will feel stressed, as well as those who will feel relieved by the procedure. They must have the ability to provide emergency medical care. And they must consider that protesters may show up at the college health center door, and be prepared to offer security and privacy to the women going inside.

“There are some valid security concerns,” Dr. Guy W. Nicolette, assistant vice chancellor for University Health Services at the University of California, Berkeley, said. In addition, he said, “not every provider feels competent or comfortable doing this.”

But Dr. Nicolette said that on balance, Berkeley’s health services believed that offering medication abortion on campus, with counseling, was the sensitive approach. “Because of our connection to the campus, we try to be the trusted source for health care for students, recognizing that often this is their first time away from home, first time accessing health care away from home,” he said.

Cost is also an issue. In California, the new law does not pay for the abortion pill, and students have to pay through insurance or in cash. Community colleges are exempt from the requirement to provide medication abortion, though a 2021 study estimated that those students sought 865 to 1,109 medication abortions per month. Women who have a child while in college are less likely to graduate than those who do not, according to U.S. Education Department data.

Women in their 20s account for more than half of abortions, or about 57 percent, according to 2019 data from the Centers for Disease Control and Prevention.

Some 300 to 500 public university students in California sought medication abortions each month, according to a 2018 study by University of California researchers published in The Journal of Adolescent Health. As many as 62 percent of students in the system were more than a half-hour by public transportation from the closest abortion provider. The average cost of medication abortion was $604, and the average wait time for the first appointment was one week, which could tip the pregnancy past the 10-week approved window in which the medication can be prescribed.

“This happens a lot — folks are pushed into another trimester waiting for a referral from the student health center,” said Cindy Cruz, the Western states program director for Unite for Reproductive and Gender Equity, an advocacy group.

Students who have to travel to a distant abortion clinic may also miss out on classes and work, said Z Zenobia, a graduate student at California State Polytechnic University, Humboldt, a campus in a rural area where access to abortion services is limited.

“Having to travel an hour there and an hour back on the bus, that could be missing an entire lab,” said Mx. Zenobia, who has also lobbied for abortion services to be more sensitive to transgender students.

At Barnard College and Columbia University, where abortion rights are not at risk, student activists who demanded medication abortion through the university’s health service were unhappy with the institutional response.

Mx. Rao, the Barnard student, said students seeking abortion often go to Planned Parenthood clinics in Lower Manhattan or the Bronx, which are targets of anti-abortion protesters who include some fellow students.

“I would argue it is more anonymous to go to your campus clinic,” Mx. Rao said.

Mx. Rao said a meeting with a Barnard health administrator last week had left them feeling a little more optimistic.

Barnard said through a spokesperson that it was committed to working with students and local organizations to “bolster” reproductive health care, including pregnancy termination, and “to determine what that looks like in a post-Roe environment.”

Universities are also getting pushback from abortion opponents.

Carol Tobias, president of the National Right to Life Committee, an anti-abortion organization, said that offering medication abortion on campus created the potential for complications, like in the case of an undiagnosed ectopic pregnancy. “I just don’t think this should be handed out like aspirin on college campuses to young girls who may not be aware of what’s happening,” she said.

Grace Lake, a senior and nursing major at East Carolina University in Greenville, N.C., said the overturning of Roe had empowered anti-abortion activists on campus. She is secretary of a recently formed group, Students for Life, which is lobbying the university’s chancellor for day care services for students who have children.

“From my point of view, there is no reason at all why there should be any available access for students to be able to end the life of their child, especially if it’s through the school,” she said.

In states where abortion laws could become more strict, students are trying to find alternatives. At Michigan State University, some students worry that their access to abortion in the state is tenuous because of a 1931 law, currently tied up in court, that criminalizes almost any type of abortion.

They were not reassured when Samuel L. Stanley Jr., the university’s president, said in a statement that reproductive health care was a “basic human right” while also acknowledging a “diversity of opinions” on the issue.

“I was like, that’s just not enough,” said Lana Heaney, a rising junior who organized a rally.

For now, Ms. Heaney said, women are working on a “backup plan” — a push to distribute contraceptives and Plan B on campus in case the law goes into effect.

Activists are also hoping that abortion doulas can support women taking medication for abortions. This year, Advocates for Youth, a reproductive health group, helped train 100 people — three-quarters of them current or recent college students — to be abortion doulas. These doulas will provide information and emotional support to those going through an abortion.

“The tactical support is really increasing — the rides, the shelter, the funds and all of the different logistical pieces that are needed to make access to abortion care possible,” said Tamara Marzouk, director of abortion access at Advocates for Youth.

Caitlyn Bull, who will be a senior at Oberlin College in the fall, has been part of the Oberlin Doula Collective, which is not formally affiliated with the school, since her freshman year. “It has been very cool to see the campus community come together around this work,” she said.

The college, she said, had sent out messages that supported reproductive rights, “but we do live in a hostile state.”

In the more volatile landscape after Roe, abortion rights advocates also need to be careful — just as careful as universities. They are being trained in how to “share” information about self-managed abortion — not to train people in how to do it — because “sharing” is legal, Ms. Marzouk said.

“When we veer into potentially giving medical advice or saying, ‘You should do this or do that,’ that could be construed as medical or legal advice,” she said, “and that veers into a risky area.”

When the Heat Can’t Be Beat

Mumbai airport to use all domestic, worldwide flights from T-2 in view of pandemic