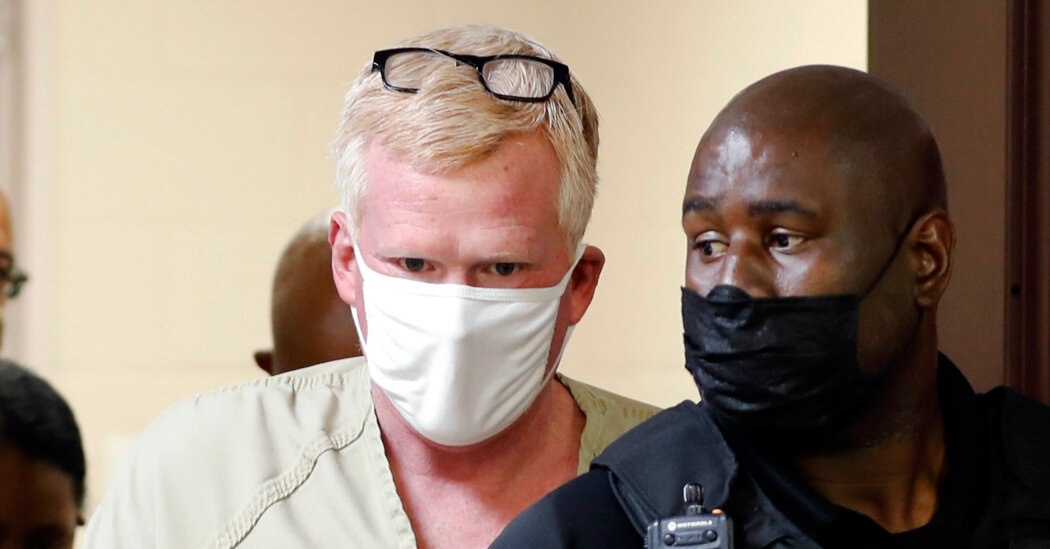 Scrutiny of last year’s murders remained high as Mr. Murdaugh was indicted on a series of financial crimes and the police re-examined the deaths of several people associated with the family.

Alex Murdaugh, the fourth-generation lawyer whose family has long held power and influence in a rural swath of South Carolina, was charged on Thursday with killing his wife and one of his sons at the family’s secluded hunting estate in a mysterious murder that remained unsolved for more than a year.

Mr. Murdaugh, 54, was indicted on two counts of murder, with prosecutors saying he fatally shot his wife, Maggie Murdaugh, 52, with a rifle and his son Paul Murdaugh, 22, with a shotgun, on June 7, 2021. Alex Murdaugh had called 911 that night from the family’s estate in Islandton, about 65 miles west of Charleston, saying he had returned home to find his wife and son dead near his dog kennel.

The state police and the South Carolina attorney general, which have been investigating the case, did not release any new details about the murders, which stunned the state’s legal community and captivated the attention of amateur sleuths across the country. Mr. Murdaugh, who has been in jail since October — unable to make bail after being indicted on dozens of financial and fraud crimes — will appear before a judge on Wednesday morning for a bond hearing on the murder charges.

Mr. Murdaugh’s lawyers said in a statement on Thursday that Mr. Murdaugh was innocent of the killings and loved his wife and son “more than anything in the world.”

“Alex wants his family, friends and everyone to know that he did not have anything to do with the murders of Maggie and Paul,” the lawyers said. They said the police had prematurely narrowed in on Mr. Murdaugh and that he had no motive to kill them.

A South Carolina mystery. The unraveling of the life of Alex Murdaugh, a prominent lawyer, is at the center of a sprawling saga of mysterious deaths — including the killing of his wife and son — and allegations of multimillion-dollar swindles. Here’s what to know about the case:

Two murders and an indictment. The fatal shooting of Maggie Murdaugh and Paul Murdaugh in 2021 rocked South Carolina’s Lowcountry region, where the Murdaugh family’s powerful legal dynasty originated. On July 14, the police charged Alex Murdaugh with killing his wife and son.

The Murdaughs are powerful. The family has dominated the legal profession in a rural swath of the state for more than a century. For nearly 90 years, the post of chief prosecutor for a five-county region was held by a Murdaugh. And for even longer, the family’s law firm has been one of the state’s leading tort litigation firms.

There was a botched suicide plot. A day after he was forced out of his family’s law firm for misusing funds, Alex Murdaugh reported that he had been shot in the head. He soon admitted that he had actually asked a former client to kill him because he wanted to leave his older son, Buster, with a $10 million insurance payout. Mr. Murdaugh survived.

Other strange deaths revolve around the case. The case has brought new scrutiny to three other deaths in the region that may be tied to the family, including a young man found dead along a road in 2015 and a fatal boat crash in 2019.

Mr. Murdaugh has been accused of swindling millions. The lawyer was arrested on Oct. 14, 2021, and charged with stealing millions of dollars from a settlement intended for the children of a housekeeper who died at the family’s home in 2018 after falling on the front steps.

The killings immediately put scrutiny on the Murdaugh family and the deaths of several people associated with them, as well as the sway the family held in the region. Mr. Murdaugh’s father, grandfather and great-grandfather had each served as the top prosecutor in a vast region at the southern end of the state known as the South Carolina Lowcountry.

The police began to re-examine the 2015 death of Stephen Smith, a 19-year-old man who was found along a road about 10 miles from the Murdaugh home and who was thought to have been hit by a truck, as well as the death of Gloria Satterfield in 2018, a housekeeper who worked for the Murdaugh family and died after falling on their house’s front steps. The police said last month that they planned to exhume Ms. Satterfield’s body. They have not accused anyone of wrongdoing in either of the deaths.

The killings also put a new focus on a deadly boat crash in 2019, one that prosecutors had said occurred while Paul Murdaugh was at the wheel. Prosecutors had charged Paul Murdaugh with drunkenly driving the boat into a bridge in 2019, killing one of several passengers, Mallory Beach, and he was still facing those charges when he was killed.

Soon after the 2021 killings, Alex Murdaugh’s life began to unravel further as those around him began to accuse him of years of financial corruption. The law firm where he worked, which was founded by his great-grandfather more than a century ago, said in September that Mr. Murdaugh had stolen millions of dollars from the firm.

The day after he was forced to resign from the firm, the police said he asked one of his distant cousins to kill him on the side of the road and stage the act as if it were a murder so that his other son, Buster, could collect on his life insurance policy. The plan failed — Mr. Murdaugh was apparently wounded in the shooting but not seriously hurt — and he and the cousin, Curtis Edward Smith, were charged with several crimes in the scheme.

In the months that followed, Mr. Murdaugh was charged with a series of financial crimes, including pocketing $2.8 million in settlement funds that had been supposed to go to relatives of Ms. Satterfield in a wrongful-death lawsuit over her fall on Mr. Murdaugh’s property. He admitted last month that he owed her sons $4.3 million.

The fallout went further as two associates of Mr. Murdaugh — a lawyer and a former chief executive of a South Carolina bank — were charged this year with various conspiracy and financial fraud crimes in what prosecutors described as schemes to misappropriate money in aid of Mr. Murdaugh. Altogether, Mr. Murdaugh has been charged with fraudulently pocketing about $8.5 million, according to the South Carolina attorney general.

This month, Mr. Murdaugh and Mr. Smith, his distant cousin, were indicted on conspiracy charges for what prosecutors said was years of money laundering related to distributing oxycodone. Mr. Murdaugh said last year that he suffered from a drug addiction and he checked himself into a drug detox center in Florida, but he was arrested at the center in October over financial crimes related to the settlement funds in the case of Ms. Satterfield.

This week, shortly after news emerged that he was likely to be charged with his wife and son’s murders, the Supreme Court of South Carolina ordered that he be disbarred based on his admissions that he owed Ms. Satterfield’s family money, had stolen from his law firm and had tried to fake his own murder.

The killings have brought massive attention to Hampton County, a rural area of about 18,000 people where the Murdaugh family’s legal dynasty operated since 1910, and has become the subject of several true crime podcasts and documentaries that remain in the works.

Chief Mark Keel of the South Carolina Law Enforcement Division said in a statement on Thursday that agents had remained focused on the investigation over the past 13 months and had been determined to identify a perpetrator.

“Today is one more step in a long process for justice for Maggie and Paul,” Chief Keel said.

Your Friday Briefing: U.N. Delays Report on Abuse in Xinjiang