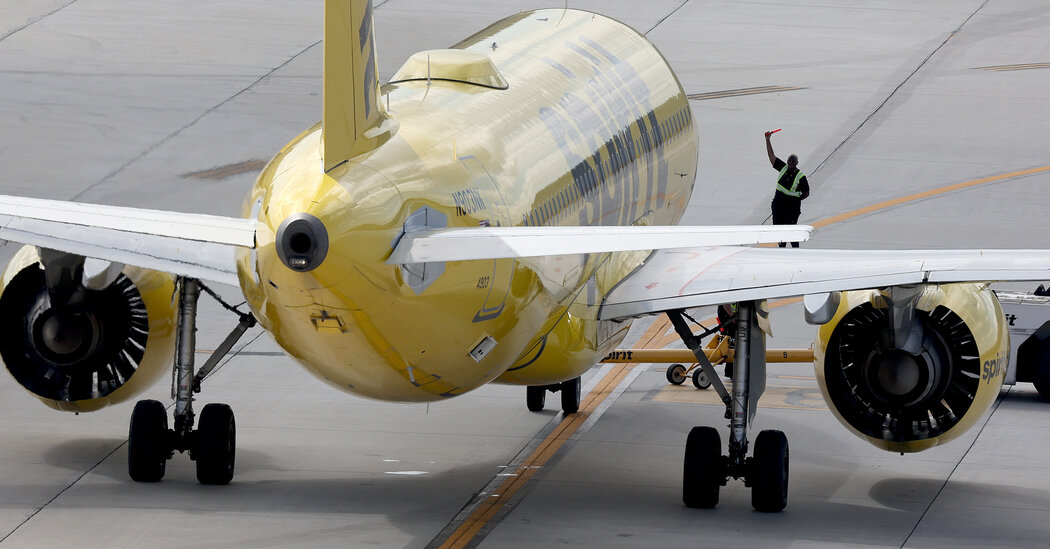 A monthslong effort by Frontier Airlines to acquire Spirit Airlines abruptly ended on Wednesday when the companies called off their proposal, giving new life to a rival bid for Spirit by JetBlue Airways.

The announcement came shortly before Spirit was to announce the results of a shareholder vote on Frontier’s acquisition offer. Spirit had repeatedly delayed the vote as it sought to persuade shareholders to support the deal and ignore the allure of the more valuable JetBlue offer.

But either merger is bound to face legal challenges from the Biden administration’s antitrust regulators, who have pledged to be tougher than their predecessors on mergers that may reduce competition.

“While we are disappointed that we had to terminate our proposed merger with Frontier, we are proud of the dedicated work of our team members on the transaction over the past many months,” Ted Christie, Spirit’s chief executive, said in a statement. “Moving forward, the Spirit board of directors will continue our ongoing discussions with JetBlue as we pursue the best path forward for Spirit and our stockholders.”

Frontier’s cash-and-stock deal was worth about $2.8 billion, based on Wednesday’s closing stock price. JetBlue’s all-cash offer is worth $3.6 billion.

Frontier said it was disappointed that Spirit’s shareholders had not rallied behind the deal. The airline, which has aggressively expanded since going public last year, said it was poised for growth, nonetheless.

JetBlue said in a statement that it would continue negotiations with Spirit and remained “fully committed to completing this transaction so we can create a compelling national challenger to the dominant airlines.”

Spirit and Frontier jointly announced their merger plan in February, arguing that a combination would create a national budget carrier. The two airlines complement each other, sharing a low-cost business model with different geographical strengths.

Weeks later, JetBlue made an unsolicited bid for Spirit. But Spirit’s executives questioned JetBlue’s intentions, suggesting that the offer may have been intended only to spoil the combination with Frontier. Spirit also said antitrust regulators would probably stand in the way of a JetBlue merger, though experts said either deal would be subject to intense federal scrutiny.

A Guide for Investors

The decline of the stock and bond markets this year has been painful. And it remains difficult to predict what is in store for the future.

Wednesday’s news doesn’t mean that JetBlue’s offer will be accepted, but it could bode well for Spirit in their negotiations.

“Today’s termination simplifies the path towards a potential JetBlue-Spirit merger, though doesn’t ensure such an outcome,” Jamie Baker and James Kirby, airline analysts at J.P. Morgan, said in a research note. “That said, we are of the ‘no news is good news’ view, as it suggests Spirit continues to hone its negotiating efforts rather than just roll and accept JetBlue’s last, public offer.”

It isn’t clear whether a majority of Spirit’s shareholders would support a JetBlue acquisition. And even if they did, regulators could derail the combination or demand stiff concessions from the companies like demanding that they give up flights or airport gates in places where they have significant overlap.

The Justice Department is already suing JetBlue and American Airlines to prevent a partnership between those airlines at airports in Boston and New York, with a trial scheduled for early this fall.

Frontier reported quarterly financial results around the same time that its Spirit deal was called off. The airline reported a $13 million profit on $909 million in revenue in the three months that ended in June. That was a 65 percent improvement in revenue and a 32 percent drop in profits from a year earlier. The airline, which has room to grow, invested heavily in expanding service throughout the quarter.

JetBlue, which is much larger than Frontier, has struggled to grow as fast as it had hoped since losing a similar bidding war for Virgin America in 2016. Alaska Airlines won out, completing the acquisition in 2018.

Buying Spirit could change that for JetBlue, but airline mergers are notoriously difficult, requiring the integration of unions, sometimes antiquated and incompatible computer systems, mismatched fleets of aircraft and disparate company cultures.

The Transport Workers Union, which represents flight attendants, reservation agents and other workers at JetBlue, said it opposed a Spirit acquisition.

“We believe that workers and airline passengers should be concerned,” John Samuelsen, president of the union, said in a statement. “If a JetBlue-Spirit deal does happen, we hope regulators will step in and recognize that combining these airlines could lead to job cuts and reduced choices for consumers.”

Spirit, a budget carrier with a middling reputation for service, keeps costs and fares low by charging extra for everything from seat selection to carry-on bags. JetBlue ranks highly in customer satisfaction and offers more premium options and free perks, such as name-brand snacks and wireless internet access.

JetBlue has said the acquisition would deliver lower fares with a better customer experience, pointing to its history of lowering costs for travelers when it enters new markets. The Justice Department cited that reputation in its lawsuit to prevent the company’s partnership with American, saying that JetBlue’s presence in Boston created “substantial savings for consumers” and that the airline had a similar effect in New York.

But some aviation experts have questioned how JetBlue would be able to maintain fares at Spirit’s already low prices. If anything, these people argued, some of JetBlue’s plans, like removing some seats from Spirit’s planes to increase legroom and sell larger, premium seats, would almost certainly raise costs.

During a call with analysts and reporters on Wednesday, Frontier’s chief executive, Barry Biffle, said his airline would benefit if JetBlue bought Spirit.

“In the event that they do merge, you take a carrier that’s probably one of the most similar to us, you slap on 40 percent more costs, and that creates a lot of runway ahead of us,” he said.

Hong Kong To Give Away 500,000 Plane Tickets to Lure Tourists

Massive fire breaks out at Terminal 1 gate of Serum Institute of India in...