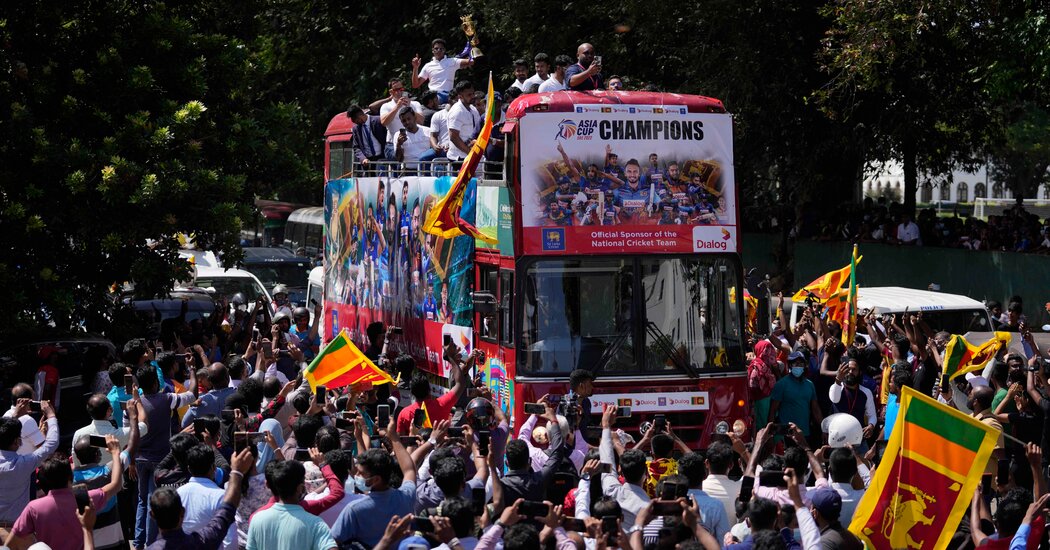 The men’s cricket team won the Asia Cup in the T20 format, hours after Sri Lanka won the equivalent championship in women’s netball. Both teams were feted with a parade on Tuesday.

COLOMBO, Sri Lanka — The streets of Sri Lanka’s capital have been jammed with crowds in recent months, as rage over an economic meltdown led to protests that dethroned a long-ruling political dynasty.

Crowds were back in Colombo on Tuesday, but instead of railing against corruption, they were celebrating twin sporting triumphs.

Sri Lanka’s men’s cricket team captured the Asia Cup in the T20 format, the game’s shortest version, on Sunday, taking the top spot for the first time in eight years by upsetting Pakistan in the final. Almost no one had expected that result from a tournament that was itself moved to the United Arab Emirates from Sri Lanka because of the country’s political and economic crises.

In Singapore on Sunday, Sri Lanka also won the Asia Cup in women’s netball, a game that is similar to basketball and, like cricket, came to South Asia through the influence of British colonial authorities.

During a parade that set off from Colombo’s international airport shortly after dawn on Tuesday, the winning teams waved from open-top buses as they were swarmed by cheering fans. For many in Sri Lanka, the spectacle was the sort of happy distraction that’s in short supply as the island nation reels from power cuts and shortages of food, fuel and medicine.

“There’s a major crisis ripping through homes all over the country at the moment, and political divisions have deepened as well,” said Andrew Fidel Fernando, a cricket writer and the author of “Upon a Sleepless Isle: Travels in Sri Lanka by Bus, Cycle and Trishaw.”

“In that context, it’s hard to overstate how important sporting success is,” he said in an email. “It provides some snatches of joy, brings people together, and for however brief a time, makes a lot of people feel proud of their country as well.”

In July, Sri Lanka’s president at the time, Gotabaya Rajapaksa, was forced to relinquish power and flee the country on a military plane after facing months of protests against an entrenched political elite that essentially bankrupted the nation. Shortages of essential supplies have since eased somewhat, but normalcy is still a long way off.

Earlier this month, Sri Lanka and the International Monetary Fund reached a preliminary agreement on a bailout package worth nearly $3 billion that would require the country to overhaul its economy (and which will still require final approval from the I.M.F.’s executive board). A few days later, Mr. Rajapaksa, the ousted ex-president, returned home, suggesting that his family remains deeply entrenched in the country’s politics.

Through it all, the men’s cricket team, which lacks a big-name star, has been on a somewhat improbable roll — in a country where the sport has been deeply revered for generations.

Notably, in July, the team rebounded from a loss to thump Australia, the world’s top-ranked squad in tests, cricket’s five-day format and its longest, on home turf. On the second day of that five-day match, demonstrators surrounded the stadium in the southern city of Galle as others overran Mr. Rajapaksa’s home in Colombo. (That was days before he resigned, fled to the Maldives, and resigned by email from Singapore.)

The win over Australia prompted some fans to hope that the men’s team, which many in the country see as aligned with their political movement, could win the T20 Asian championship this month. But that hope faced powerful headwinds in the form of sporting analytics that favored stronger teams, namely India and Pakistan.

“We were the absolute underdogs going in,” said Mevantha De Silva, 29, a cricket fan and the head of sales and marketing at a Sri Lankan company that owns luxury villas. “Everyone had written us off.”

Expectations fell further when Sri Lanka dropped the first match of the tournament to Afghanistan, an inferior team by cricket rankings.

“I was like, if this is what Afghanistan is doing to us, what are India and Pakistan going to do to us?” Mark Machado, a cricket commentator, said in a podcast about Sri Lankan cricket on Monday. “Maybe we won’t even get to play them if we lose to Bangladesh.”

The team not only beat Bangladesh, but in the next rounds pulled off stunning upset victories against both India and Pakistan, driven largely by fielding that Mr. Fernando described as “electric, almost without exception.”

Compared with cricket, netball is far less popular in Sri Lanka, but because the country’s women’s squad has long been among the top three in the regional rankings, their Asia Cup success was not exactly a surprise, said Estelle Vasudevan, a reporter for the sports news site ThePapare.com.

Still, that victory was notable because the team has a limited budget to help its players cope with power cuts and fuel shortages, Ms. Vasudevan said. And because it came about the same time as the men’s cricket victory, she added, many more Sri Lankans paid more attention to it.

Hiruni Kasturiarachchi, 28, a lawyer and a former member of Sri Lanka’s under-19 national netball team, said that she hoped the women’s Asia Cup would bring attention to a sport that most Sri Lankans were generally “not so keen on” — and that big victories of any kind, in any sport, were welcome at this juncture in the country’s history.

“People are so down these days because of the current crisis,” she said. “These sports victories really are a ray of light on gloomy days.”

Mistrust between China, India at all-time high, says US admiral

How Is Your Company Responding to Labor Organizing? We Want to Hear.