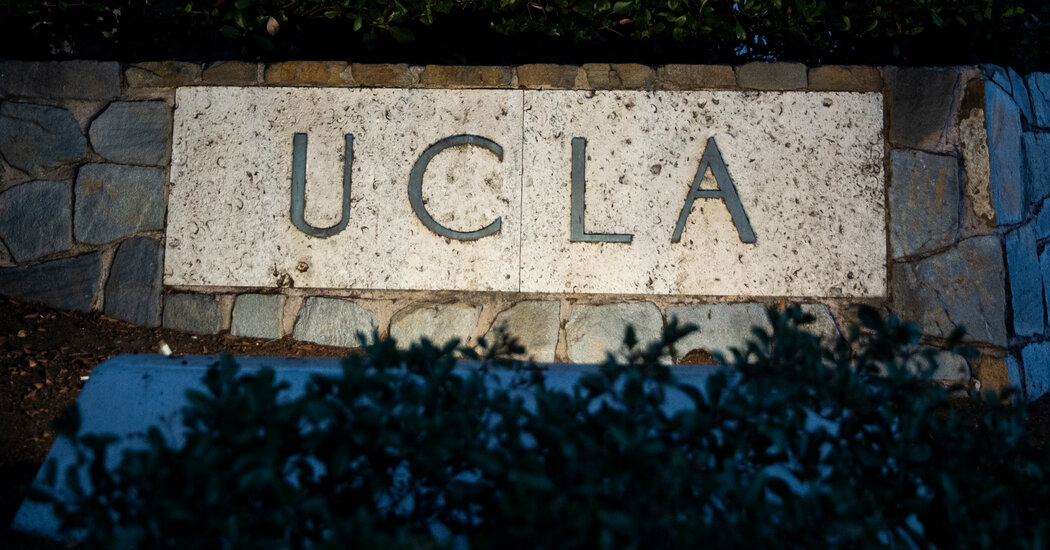 With a soaring number of immigrant students not eligible to work legally, a new campaign is urging the influential University of California system to employ undocumented students.

LOS ANGELES — They have attended school in the United States, spent their childhoods in U.S. neighborhoods and grown up as Americans in every way but one — brought to the country by their undocumented parents as children, they have no legal authority to live in the United States.

The political and legal turmoil over the federal program that since 2012 has shielded many of them from deportation, the Deferred Action for Childhood Arrivals program, has left thousands of the so-called Dreamers — immigrants whose plight has won sympathy at times from Democrats and Republicans alike — in legal limbo. Federal law makes it illegal to hire undocumented immigrants, and, under the law, many of these young immigrants will graduate from college to a life of under-the-table jobs as nannies and construction workers.

The proposal, which almost certainly would face significant political and legal challenges, calls for the state to defy current interpretations of a 1986 federal immigration law that prohibits U.S. employers from hiring undocumented immigrants. But a new legal analysis drafted at the University of California, Los Angeles, and reviewed in some of the nation’s top law schools argues that the law does not apply to states.

Backed by Erwin Chemerinsky, the dean of the University of California, Berkeley, School of Law; Adam B. Cox of New York University Law School; and constitutional and immigration scholars at Cornell, Stanford and Yale, among other universities, the concept that those in the country unlawfully could be hired for state jobs could have implications for California, where the U.C. system is the third-largest employer, and for the broader population of 11 million undocumented people who live in the United States.

Undocumented student leaders from U.C.L.A. will present a letter to the president of the University of California, Michael V. Drake, on Wednesday, formally proposing that the university system begin hiring undocumented students for a range of jobs, including as research and teaching assistants and paid interns.

“At the University of California, students who cannot access DACA are being systematically denied opportunities afforded to their classmates, including employment opportunities that would enhance the research, education and public service mission of the university,” the letter said.

California, which has the largest population of undocumented immigrants in the country, has a history of resisting federal immigration controls, issuing drivers licenses to all state residents regardless of immigration status and offering in-state college tuition to undocumented students. It recently became the first state to offer state-funded health care to all low-income people. Several cities, including Los Angeles and San Francisco, have declared themselves as “sanctuary cities” that will not cooperate with federal efforts to deport undocumented people simply because of their immigration status.

Hiring undocumented students would go a step further, most likely inviting legal challenges from immigration opponents and opening the door to potential conflicts with the federal government. President Biden, though, had pledged to offer permanent DACA protections and the legal permission to work that the program provides to more undocumented young people.

Congressional haggling over legislation to produce a solution for the group has gone nowhere for 20 years, and attempts by the Biden administration to shore up the DACA program have been stymied in the courts. Under recent court rulings, those already enrolled in DACA are allowed to retain its protections but no new enrollments are allowed, creating a growing class of young immigrants, many now of college age, who do not have the same rights as the aging Dreamers.

The class of young immigrants who grew up in the United States but are not eligible for DACA is expanding at the rate of 100,000 people each year. California alone is home to more than 44,000 undocumented college students who cannot apply. Another 27,000 are graduating from high schools in the state each year.

Ahilan Arulanantham, co-director of the Center for Immigration Law and Policy at U.C.L.A., said he began hearing last year from faculty about a worsening problem with the increase in the number of undocumented students without DACA protections — students who could not be paid to work as research assistants or in other campus jobs.

Mr. Arulanantham’s team had already concluded that the federal law against hiring undocumented people did not bind states, and they began holding listening sessions with scholars across the country to vet their reasoning.

Twenty-six experts agreed, concluding in a legal analysis being released with the students’ letter on Wednesday that when Congress passed the Immigration Reform and Control Act in 1986, it did not curtail the states’ historic power to determine whom they could employ. The legal scholars also noted that the Supreme Court has repeatedly found that Congress has no power to regulate state governments in certain areas, such as employment, absent “clear language” to allow it.

“This proposal has been hiding in plain sight,” Mr. Arulanantham said. “For nearly 40 years, state entities thought they were bound by the federal prohibition against hiring undocumented students when, in fact, they were not.”

The U.C.L.A. legal group quickly found support from within the university community.

“Some of the finest students in my career have been undocumented students. And yet I can’t hire them as researchers or teaching assistants. This is not only detrimental to their education and career, but it negatively impacts the university as a whole,” said Kent Wong, director of the U.C.L.A. Labor Center, a research department focused on organized labor and labor rights.

Among them is Karely Amaya, 22, a graduate student in public policy who is undocumented and among the organizers of the campaign.

“We have a window of opportunity here. All of these prominent legal scholars are backing us up,” said Ms. Amaya, who was born in Mexico and has been in the United States since she was 2.

“I have a job offer on the table. If we win, I can get hired and have my tuition covered,” she said in an interview. “In the meantime, I’m barely surviving. I’m patching together resources.”

Offering students the ability to work for their universities would not provide protection from deportation or change their legal immigration status. And it is too early to tell how the proposal will be received by the U.C. president, individual university chancellors and the Board of Regents, a governor-appointed body that oversees the system.

But Mr. Arulanantham said that the hope was that it would be embraced by all the public universities in California and, ultimately, in other states.

The student organizers said they planned to mobilize undocumented students on all 10 U.C. campuses to attend meetings of the Board of Regents and push the issue with the U.C. president’s staff. They said the campaign would also target local and state elected officials who could exert pressure on the U.C. leadership.

Given the persistent gridlock in Congress over DACA and other immigration legislation, undocumented student leaders said that seeking solutions at the state level was their only viable strategy.

“What are the changes we can make while we continue to fight for a permanent solution?” said Jeffry Umaña Muñoz, 20, an undocumented student leader who was brought to the United States from El Salvador at the age of 2.

After he gained admission to Harvard and Yale, in addition to U.C.L.A., he chose the California school because he felt it would offer more support for undocumented students. But his educational experience would be diminished, he said, without the ability to legally work.

“Since we know DACA is headed to an end, Congress isn’t acting and Biden won’t take any meaningful action on immigration, this campaign came at the right moment for us,” he said.

Female eliminates children, hangs herself to death in Telangana

2021 WTC final|Has India seen the point of the decent winner?