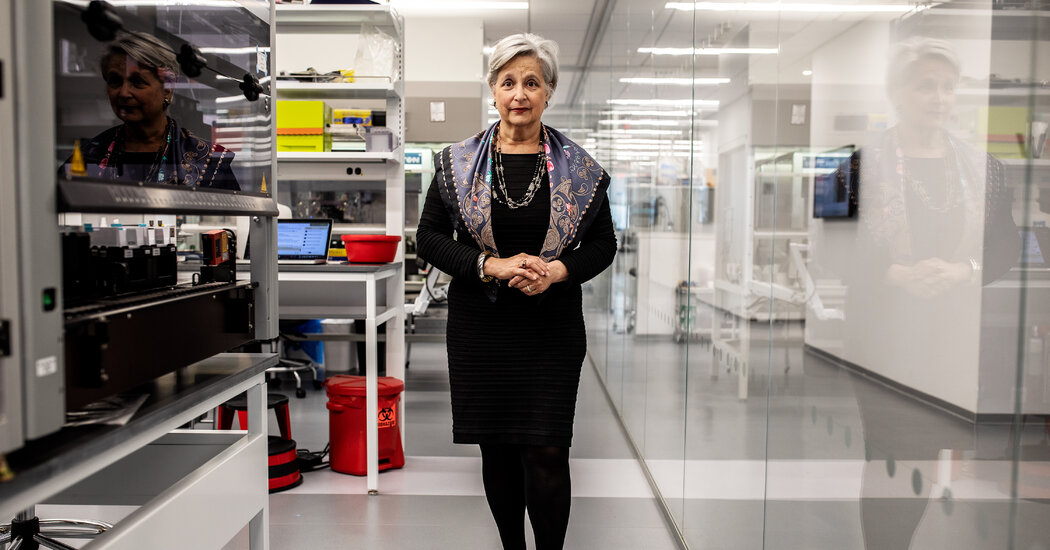 Vexed by lags in producing cures for diabetes and cancer, she helped raise $400 million to start a foundation that has made medical breakthroughs.

Susan L. Solomon, whose frustration over lags in finding a cure for her teenage son’s Type 1 diabetes prompted her to establish what became a leading independent stem cell research laboratory, died on Sept. 8 at her home in Amagansett, N.Y. She was 71.

The cause was ovarian cancer, according to her husband, Paul Goldberger, the former architecture critic of The New York Times and The New Yorker.

In 2005, Ms. Solomon abandoned a successful career as a lawyer, new media entrepreneur and management consultant to join Mary Elizabeth Bunzel, a former journalist, in founding the New York Stem Cell Foundation, of which Ms. Solomon was chief executive for 17 years, stepping down only recently.

The foundation’s goal is to accelerate cures for major diseases through stem cell research, and its lab, the New York Stem Cell Foundation Research Institute, on West 54th Street in Manhattan, describes itself as the largest independent stem cell research lab in the country. It has been credited with making inroads against Parkinson’s, Alzheimer’s, neurodegenerative diseases and vision loss, as well as mitochondrial disease in pregnant women, which can lead to stunted growth, kidney disease or neurological disorders in their offspring.

Ms. Solomon and Ms. Bunzel started the foundation in response to the refusal of the administration of President George W. Bush to make a major investment in stem cell research. Their hope was that stem cells — basic cells that can generate new cells with specialized functions — could be transformed into cells that produce insulin and thus help people with Type 1 diabetes. The pancreas of such a patient does not produce enough insulin on its own to help the body convert blood sugar into energy.

Stem cell research became a political issue for the Bush White House because the cells were originally harvested only from fertilized embryos, which many social conservatives consider human lives. Some private research organizations also shied away from stem cell research at the time, fearing they might jeopardize their funding from the federal government.

Ms. Solomon first envisioned the New York Stem Cell Foundation in her kitchen after her mother died of cancer and her son developed Type 1 diabetes, a chronic condition that required him to constantly monitor his blood sugar levels and inject himself with insulin.

Her goal was to expedite breakthroughs in medical research into treatment or cures that would be readily available to patients. “She imagined the impossible and made it happen,” said Dr. Roy Geronemus, chairman of the foundation’s board.

The foundation has grown into an institution with a $40 million annual budget and more than 114 employees, including 45 full-time scientists, as well as its own laboratory. It has also overseen fellowships that support researchers at other institutions.

Ms. Solomon told the journal futuremedicine.com in 2012 that in helping to found the organization she was prompted in part by “a giant gap between the work being done at academic institutions and the delivery of pills and treatments on the commercial side.”

“We, as a small organization, could never provide the funding that the government can,” she said. “But what we can do is create a path, resources, fellowship programs and a laboratory, and lead research. We are providing the proof of concept, so that when public opinion and public funding is available, then that work can be scaled up.”

Susan Lynn Solomon was born on Aug. 23, 1951, in Brooklyn. Her father, Seymour, founded Vanguard Records with his brother Maynard. Her mother, Ruth (Katz) Solomon, was a pianist and manager of concert musicians.

After graduating from the Fieldston School in the Bronx, Ms. Solomon earned a bachelor’s degree in history from New York University in 1975 and a law degree from Rutgers in 1978.

Her eclectic career began at the law firm of Debevoise & Plimpton in New York, where she helped initiate an employment discrimination case on behalf of women who said they were denied the opportunity to become New York City firefighters.

She left the law firm in 1981 to become counsel and director of business affairs for Warner Amex Satellite Entertainment. She later worked for United Satellite Communications; CBS Films; Sotheby’s, where she was chief executive of its first effort to create an online auction platform; and Lancit Media, a producer of TV programming for children, where she was also chief executive. In 2000, she established and ran Solomon Partners LLC to provide strategic management consulting

Her marriage in 1968 to Gary Hirsh, the drummer for the band Country Joe and the Fish, ended in divorce. She married Mr. Goldberger in 1980.

In addition to her husband, who is now a contributing editor at Vanity Fair and a professor of design and architecture at the Parsons School of Design and the New School, Ms. Solomon is survived by three sons, Adam Hirsh, from her first marriage, and Ben and Alex Goldberger; and six grandchildren.

She never gave up hope that some day researchers would develop a treatment for the disease that her son Ben has been dealing with for three decades, since he was 9 years old. He is now the executive editor of Time magazine.

“I’m not going to rest until we find a cure for Type 1 diabetes,” Ms. Solomon told The Wall Street Journal in 2016. “It’s going to happen in my lifetime. I believe it.”

Taiwan: China’s Military Exercises Could Help It Practice an Attack

EC rules out attack on Mamata Banerjee; says injuries due to lapse on part...

Bhandara fire incident: Maharashtra announces ex-gratia of Rs 5 lakhs each to kin of...