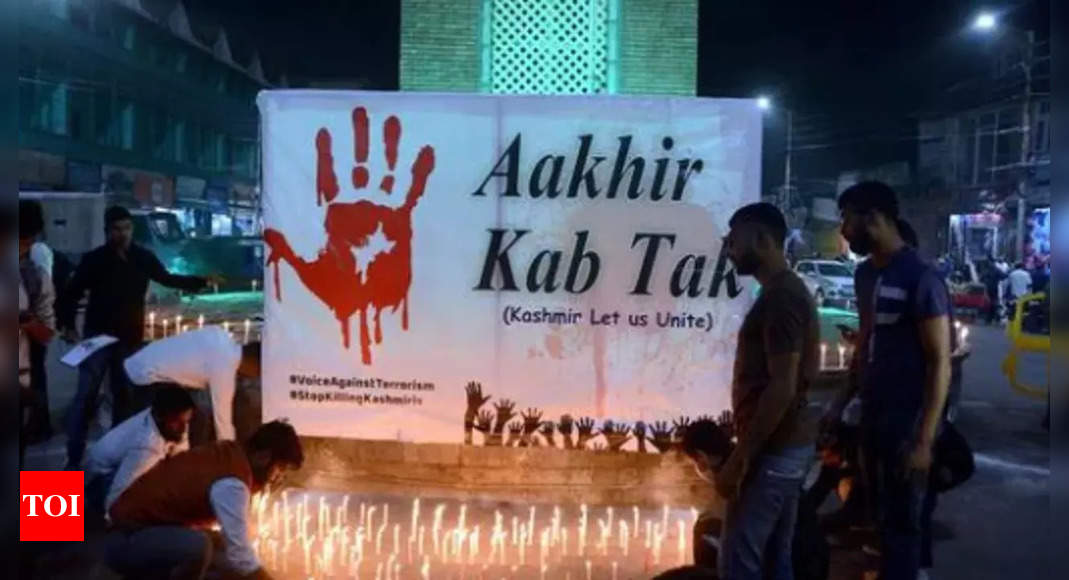 NEW DELHI: The targeted attacks in J&K in which 5 civilians, including 4 from minority religious neighborhoods, were eliminated over the past 3 days, are being seen by the security companies as part of a revised technique by ISI-backed terrorist groups to push regional fear recruits to go after non-local, simple targets. The goal, sources said, is to change the narrative of ‘zero-tolerance’ against terrorists or their sympathisers, big development push, revival of tourist and ‘complete combination of J&K with rest of India’ that has actually gotten ground considering that the abrogation of Post 370, by creating an environment of fear and insecurity, particularly for the non-locals.
This evaluation was shared at a conference chaired by home minister Amit Shah here on Thursday to examine the security situation in J&K in wake of the civilian killings. The meeting was participated in by NSA Ajit Doval and heads of CRPF, BSF and intelligence agencies. A fine-tuning of methods, including the need to keep a closer enjoy on youths prone to radicalization and in touch with terrorists and gather better intelligence on transfer and supplies of arms, is believed to have been talked about.
As numerous as 28 civilians have actually been killed up until now this year. of which 5 were from regional Hindu or Sikh neighborhood and 2 were non-local labourers.
IGP Kashmir Vijay Kumar informed TOI that terrorists had actually used pistols in all the recent civilian killings. “These acts are committed by freshly recruited terrorists or those about to join terrorist ranks. In many cases, overground employees were straight included. J&K Cops are working hard to identify such part-time or ‘hybrid’ terrorists and will take strictest action against them,” he stated.
According to sources, Pakistan-based fear sponsors have actually been pushing groups like Lashker e Taiba and Jaish e Mohammed to step up seepage into J&K considering that July. Intelligence inputs nevertheless show that primarily local youths are being prepared to perform attacks on ‘soft’ targets, which might occasionally consist of locals thought to be ‘informers’. While it is declared that some of these regional recruits are connected with The Resistance Front (TRF), J&K authorities sources firmly insist that with the leading leadership of the attire neutralized over the past couple of months, TRF is just a smokescreen developed by LeT to maintain deniability and job terrorist attacks in J&K as an indigenous task. It is likewise associated with Pakistan’s efforts to avoid a ‘blacklisting’ by the Financial Action Task Force (FATF).
While the very first three attacks this week, including a Kashmir Pandit chemist, Bihari street vendor and regional taxi stand owner, were connected to TRF, Thursday’s killings of a principal and a school teacher have been attributed to Jaish e Mohammed. A source stated there was an intelligence input prior to Thursday’s attack that 3 Pakistani Jaish terrorists were in Srinagar downtown area. They however left Srinagar prior to the attack, leading the firms to think that they had actually pertained to only hand over weapons– handguns in this case– to the locals prepared for the task.
“We believe numerous recent attacks on civilians were brought out by regional Kashmiris, the majority of them not yet marked as having actually signed up with the terror ranks, with weapons provided from Pakistan either through drones or brought in by the infiltrated terrorists,” said a source.
A pro-Pakistan site that posts on terror techniques in Kashmir, had in a blog dated September 24, 2021, alleged “attempts by occupier India to change the dynamics in J&K, especially Kashmir” by promoting non-locals in controlling positions within the administration, police, businesses and universities and restricting locals in federal government tasks by tightening their service conditions. A reference was likewise made to efforts by the J&K federal government to transplant Kashmiri Pandits.
The blog site, as a method, called upon the ‘Resistance’ to target non-locals, consisting of government personnel, those in the Valley for a long stay and Kashmiri Pandits. It asked petrol bombs and stones to be tossed at ‘informer’ areas locally and heads of universities “that are hand in glove with the routine” to be targeted.