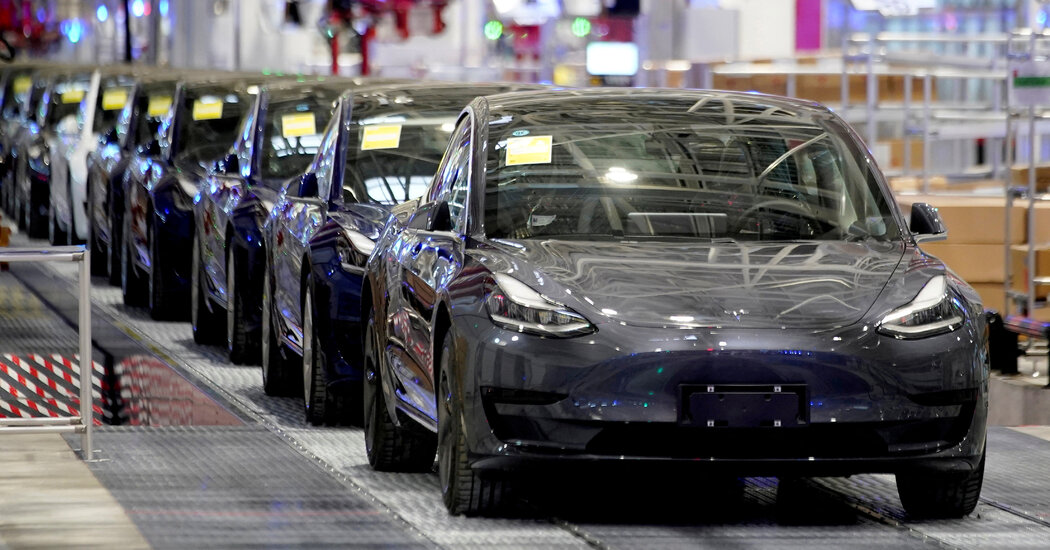 Shares of the company slumped as investors worried about increasing competition.

Tesla on Monday cut prices for its cars in China, a sign of intensifying competition in the world’s largest car market that provoked a slump in the company’s shares.

Tesla’s Chinese website was offering the Model 3 sedan on Monday for a starting price of 265,900 renminbi, or $36,600, including government subsidies, a 5 percent reduction. The Model Y sport utility vehicle was advertised at 288,900 renminbi, a 9 percent cut.

Tesla shares fell more than 6 percent before recovering a little as the price cuts reinforced fears among investors that the company’s profitability and dominance of the electric vehicle market was threatened by slowing economic growth and increased competition. Until recently, strong demand for Tesla cars had allowed the company to frequently raise prices.

In China, Tesla faces competition from domestic companies like BYD, SAIC Motor and Nio, which are also pushing into the European market with more affordable electric vehicles. The Chinese government has promoted its electric vehicle and battery makers, seeing the shift in technology as a chance to break into the global market and challenge established Japanese, German, Korean and U.S. carmakers.

Although China has the world’s largest car market, Chinese automakers are small players in the rest of the world. Investors closely monitor Tesla’s performance in China because the country is seen as having far more growth potential than Europe or the United States.

Tesla shares have fallen 12 percent since Wednesday, when the company reported third quarter profit figures that disappointed Wall Street. Although its earnings in the third quarter doubled from a year earlier, to $3.3 billion, investors had expected more.

Tesla stock is also under pressure because traders widely expect that the company’s chief executive, Elon Musk, will have to sell more shares to come up with the money he needs to close his purchase of Twitter by Friday.

For car buyers, the Tesla price cuts in China could be good news. Popular electric models like the Ford Mach-E, Hyundai Ionic 5 or Volkswagen ID.4 have been difficult to find, and there are reports of dealers demanding thousands of dollars more than the retail prices suggested by manufacturers.

The market may be shifting as automakers produce more cars because they have fewer supply chain problems, and rising interest rates reduce demand by raising monthly car payments sharply.

Wait times for Teslas have already been shrinking, in part because the company was able to increase production at its factory in Shanghai, which had been hit by slowdowns related to pandemic lockdowns.