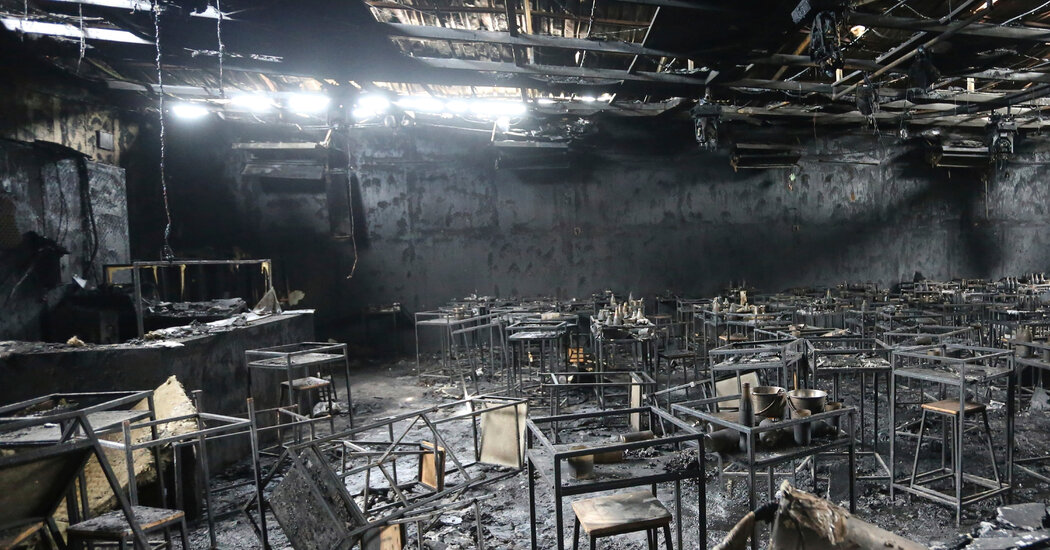 Witnesses said the flames spread rapidly. A video showed victims running from the building with their clothes ablaze.

BANGKOK — A fire broke out in a crowded music pub in Thailand’s eastern Chonburi Province early Friday morning and spread quickly, killing at least 13 people and injuring about three dozen, the authorities said.

A video from the scene showed people fleeing the burning building, some with their clothes on fire.

The police said they were investigating the cause of the blaze. The nightspot was built illegally, without a license in an area where entertainment venues were not allowed, as an addition to an existing restaurant, they said.

Witnesses said that the fire appeared to start on the ceiling near the stage, and that they heard explosions soon after it broke out.

The police were investigating reports that an emergency exit was locked at the time of the fire, local news media reported. Some news outlets also reported that the fire was fueled by a flammable soundproofing material that lined the walls.

A customer who gave her name only as Nana told the local television station PPTV that she was sitting near the back of the pub when she first saw a spark near the ceiling above the stage, and that the fire spread rapidly from there.

“I saw flames above the stage, on the right side,” she said. “The singer onstage saw it too at about the same time, and he shouted ‘fire!’ and threw the mic at it.”

As she and her friends made their way to the door, they saw people’s clothing catch fire, she said. “I saw a lot of the pub’s bouncers covered in flames inside.” She added that the pub had opened only recently.

The nightspot, Mountain B, is in Sattahip District at the southern tip of Chonburi Province, about 100 miles southeast of Bangkok. All of the victims were Thai citizens, according to the police.

Photos of the pub taken after the fire showed a charred stage and sound equipment, the floor covered with ashes and water and the remains of tables and stools.

The deadly episode comes as Thailand tries to revive its tourism industry. A major contributor to the national economy, the tourism sector has been hammered by the coronavirus pandemic and has only recently begun to attract significant numbers of international visitors.

The fire was reminiscent of a deadly blaze that swept through the high-end Santika nightclub in Bangkok just as the new year began in 2009. That fire, which may have been started by fireworks, killed 66 people, many of them foreigners, and injured more than 200.

India, China to hold 9th round of military talks in eastern Ladakh

2 days holiday due to rain in Greater Hyderabad