Voters in New Hampshire and Mississippi face the highest personal cost in the country in terms of the time and effort required to cast a ballot, according to a new academic study. Voters in Oregon and Washington have it the easiest.

And while residents of Georgia, Florida and Iowa face taller barriers to voting since Republicans tightened their election laws last year, all three states remain roughly in the middle nationally in terms of how easy it is to register and to vote.

That is in part a reflection of the fact that many deep-red states, but also politically divided states like New Hampshire and Wisconsin and deep-blue ones including Connecticut, have had many limits on access to the ballot for years, well before the Republican-led push after the 2020 election to overhaul voting laws.

Where it’s easiest and hardest to vote

Source: Cost of Voting in the American States: 2022.

Source: Cost of Voting in the American States: 2022.

The findings are part of the 2022 edition of the Cost of Voting Index, a nonpartisan academic study that seeks to cut through the politics of voting access. The study ranks all 50 states based on the overall investment a resident must make, in time and resources, to vote.

The two categories given the most weight, according to Scot Schraufnagel, a political scientist at Northern Illinois University and an author of the study, were ease of registration to vote and the availability of early voting, both in person and by mail. The study’s emphasis on early-voting options meant that states like Washington and Oregon, where voting is conducted entirely by mail, ended up at the top of the rankings.

New York is ranked 17th, largely because it offers early in-person voting and online voter registration, but it is not among the top-ranked states because it does not have widespread vote-by-mail options. A referendum that proposed to introduce the practice failed last year.

The study draws a distinction between early voting and in-person absentee voting, which, according to Dr. Schraufnagel, “looks a lot like early voting but is not the same thing,” because it can be limited to county election offices rather than more numerous polling sites. So states like Ohio, Wisconsin and Pennsylvania were considered to have zero days of early voting in the study, even though they have as many as 30 days of in-person early absentee voting.


Some states move to expand early voting and vote-by-mail

These eight states are now

ballots to all registered voters

ahead of Election Day.

who can’t vote on

the day may still 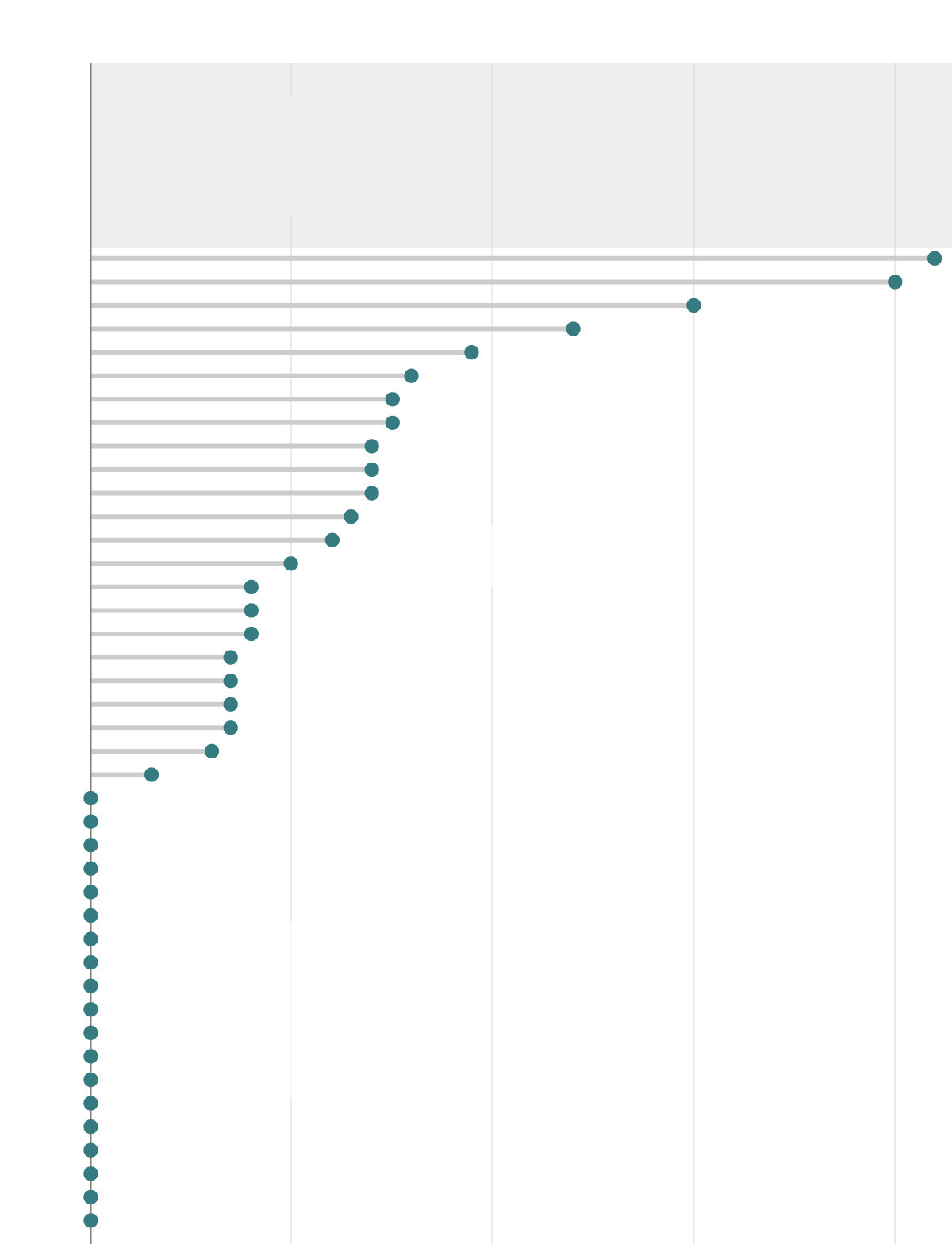 These eight states are now

ballots to all registered voters

ahead of Election Day.

of early voting this year.

voting only on Election

who can’t vote on the

day may still vote by

Source: Cost of Voting in the American States: 2022. Note: States are shown as having zero days of early voting if their only early-voting option is by in-person absentee ballot. Figures are based on the latest available information from each state.

“The ability to vote by mail where you’re actually sent the ballot precludes the need to vote early, because everybody’s voting early, in effect,” Dr. Schraufnagel said. “Anecdotally, I’ve got a friend in Oregon who has ribbed me about how ‘I got my ballot today, and the wife and I are sitting at the kitchen table, and we’re going to drop it in the mailbox.’ It makes voting really easy in those states.”

The study was first drawn up by professors from Northern Illinois University, Jacksonville University and Wuhan University in 2018 as a means of looking empirically at voting in the United States. It was published again in 2020.

This year’s rankings are the first since the avalanche of voting laws passed by state legislatures across the country after the 2020 election. Last year, 19 states passed 33 laws restricting voting, according to an analysis by The New York Times. Twenty-five states expanded voting access in 2021, resulting in some significant changes to the rankings.

Vermont, for example, jumped “from the middle of the pack in 2020,” when it ranked 23rd for voting access, to “the third-easiest state by 2022,” according to the study. This was largely because it adopted a statewide vote-by-mail system.

Wisconsin went the opposite direction, falling to 47th from 38th, in part because the state now requires proof of residency on voter registration applications. The state also stopped using special voting deputies, officials whose tasks had sometimes included conducting voter registration drives, according to the study.

register to vote and

cast a ballot on the register to vote and

cast a ballot on the

Source: Cost of Voting in the American States: 2022. Note: Utah and California allow same-day voter registration but only by provisional ballot. The researchers add days to reflect this restriction. Figures are based on the latest available information from each state.

Though the study is nonpartisan, some conservative voting groups criticized the index for not weighing security measures as heavily as other categories. (The study does argue that vote-by-mail systems improve election security, calling them a “barrier to fraud” because “there can be more careful bipartisan or nonpartisan deliberation of signature matches, ballot authenticity and other issues related to ballot integrity.”)

Jason Snead, the director of the Honest Elections Project, a conservative group, said the study “continues to emphasize that security rules are really restrictions, and really doesn’t make any attempt, at least not that I can see, to account for any of the benefits that come from having those sorts of rules.”

Mr. Snead, whose group has frequently advocated laws tightening voting rules and has joined an effort to give state legislatures more power over elections, added that the index “only looks at really one side of the ledger.”

Dr. Schraufnagel, however, said he had run a separate analysis comparing the cost of voting in each state with the number of voter fraud cases in each state, based on a tracking database maintained by the conservative Heritage Foundation.

“The idea here is that if fraud is a concern when we make voting easier with mail-in voting or early voting, then we should see an increase in fraud, right?” he said. “And, conversely, if a state makes it harder to vote — puts in a strict photo ID or something — then we should see less fraud.”

In nearly every state, Dr. Schraufnagel said, “there was either equal amounts of fraud before and after the change, or it went the other way, where New Hampshire restricted voting and actually saw more fraud.”

His review, however, looked only at fraud cases tracked by the Heritage Foundation. Voter fraud is extremely rare in the United States.

To assess the voting laws passed after the 2020 election, this year’s Cost of Voting Index study added new categories and scoring.

One was a section on absentee voting by mail, including new identification requirements, limits on drop boxes and shortened return windows. Researchers also considered measures like bans on third-party groups’ handing out of food and water and requirements for documentation to register to vote beyond the minimums established by the National Voter Registration Act of 1993.

But while the placement of states that passed laws with significant restrictions dipped — Florida dropped to 33rd from 28th, Georgia to 29th from 25th and Iowa to 23rd from 19th — they still maintained higher rankings than many other states. Even though the laws included a range of voting restrictions like new identification requirements for mail voting, limits on provisional ballots and reductions in drop boxes, Florida and Georgia still have early in-person voting periods, which the study weighs heavily, and Iowa has same-day voter registration.

Additionally, Dr. Schraufnagel said, some of the laws passed by Republicans “were really attempts to undo things that were done in response to the pandemic.”

The study singles out Georgia for barring outside groups from providing food and water to voters waiting in line. But Mike Hassinger, a spokesman for Brad Raffensperger, the Republican secretary of state in Georgia, questioned whether that provision should have been included in the study.

“I don’t know that that makes it harder to vote,” Mr. Hassinger said. “Is it really that much harder to vote if you don’t get a snack while you’re waiting?”

“More Georgians are turning out to vote,” he added. “Their votes are getting counted. Our results are accurate because of the security measures we have in place, and people trust them.”

Indeed, in some cases, the ranking in the Cost of Voting Index is far afield from a state’s turnout. New Hampshire, for example, had the seventh-highest turnout rate of voters in the 2020 election, according to the Election Project, a database maintained by Michael McDonald, a professor at the University of Florida.

While the political debate surrounding new election laws has centered on ballots and the voting process, the Cost of Voting Index also gives heavy weight to the ease of voter registration. States rank higher in the index if they allow voter registration drives, provide automatic voter registration, offer same-day registration and maintain longer periods in which to register.

One state that made a significant jump this year was Colorado, which, the study said, “adopted the most progressive automatic voter registration” process. Under the new system, Coloradans are automatically registered to vote when they visit the offices of state agencies like the Department of Motor Vehicles; they are then sent a postcard or letter informing them and offering an option to decline the registration.

“Even in the height of the pandemic, it registered, like, 200,000 eligible voters,” said Jena Griswold, the Democratic secretary of state in Colorado, where the new system has since registered more than 350,000 voters since it was put in place in 2020. “It was one of the truly successful tools that we have had implemented that kept registration really constant and flourishing.”

Amazon to Buy Maker of the Roomba for $1.7 Billion

Sunil Grover reveals how he bagged the role of Gurpal in Ali Abbas Zafar’s...

Wedding video of Jasprit Bumrah-Sanjana Ganesan surfaces online & it is dreamy to say...