The attack has caused alarm about the threat of violence to elected officials, and has also become the focus of baseless conspiracy theories.

The attack on Paul Pelosi, the husband of House Speaker Nancy Pelosi, has not only raised alarm about the threat of violence to elected officials and their families, but also become the focus of baseless conspiracy theories propagated by a litany of Republicans and conservatives.

After state and federal charges were filed against a suspect, the San Francisco district attorney, Brooke Jenkins, said that the widespread misinformation had made it all the more important for prosecutors to present the facts to the public.

Here is what we know about the Oct. 28 attack at the speaker’s San Francisco home, based on court documents and accounts provided by officials.

The attack began with a break-in.

An affidavit from an F.B.I. agent that accompanied the federal charges and a filing by local prosecutors have provided a chilling narrative of the break-in. They outline a groggy early-morning home invasion that culminated with a single, sudden hammer blow, delivered in the presence of shocked police officers.

The suspect, identified by the police as David DePape, slammed his body through a glass door and entered the residence around 2 a.m., awakening Mr. Pelosi, who was in bed, prosecutors said. The suspect told Mr. Pelosi that he wanted to talk to “Nancy” and learned she was not there. When Mr. DePape said he would sit and wait for Ms. Pelosi, her husband said that she would not return for several days.

Mr. Pelosi, sitting on his bed, asked why.

“Well, she’s No. 2 in line for the presidency, right?” the intruder said, according to the police. Soon after, he told Mr. Pelosi that “we’ve got to take them all out.”

He also told the police that he intended to take hostage and perhaps break the kneecaps of Ms. Pelosi, whom he saw as “the ‘leader of the pack’ of lies told by the Democratic Party.”

Paul Pelosi called 911 from a bathroom. When the police arrived, the suspect attacked him.

At one point, Mr. Pelosi tried to access an elevator, which has a phone, but was blocked from doing so, according to the local prosecutor. At some point after that, Mr. Pelosi ducked into a bathroom to call 911 from his cellphone.

The local court filing said that during the 911 call that prompted a dispatcher to send officers, Mr. Pelosi left the phone on speaker and, trying to keep the assailant calm, was able to gently imply to the dispatcher that something was amiss.

More on the Paul Pelosi Attack

At one point, to defuse the situation, prosecutors wrote, Mr. Pelosi told the dispatcher that he didn’t need the police. When the dispatcher told him to call back if he changed his mind, he said, “No, no, no, this gentleman just, uh, came into the house, uh, and he wants to wait for my wife to come home.”

Officers with the San Francisco Police Department arrived about eight minutes after the call to find the two men struggling over a hammer.

When they asked what was going on, Mr. DePape “responded that everything was good,” the F.B.I. agent wrote. At that moment, Mr. DePape yanked the hammer from Mr. Pelosi’s grip and struck him once in the head, rendering him unconscious on the floor, where he lay in a pool of blood.

The officers quickly restrained Mr. DePape. When they examined the contents of his backpack, they found another hammer, tape, rope, two pairs of gloves — rubber and cloth — and a journal.

Mr. Pelosi, 82, who underwent surgery to repair a fractured skull and serious injuries to his hands and right arm, remained in the intensive care unit of a hospital on Tuesday, according to a person familiar with the situation.

The man accused of the attack told the police he had other targets.

The police said that without any questioning, Mr. DePape told them that he was on a suicide mission. He also mentioned that he had a list of other targets that included a local professor and several prominent state and federal politicians.

The authorities said he believed his actions had been captured by home security cameras and recorded on the 911 call, but remained undeterred.

The “defendant’s intent could not have been clearer: he forced his way into the Pelosi home intending to take the person third in line to the presidency of the United States hostage and to seriously harm her,” prosecutors wrote as they asked the court to detain Mr. DePape without bail. 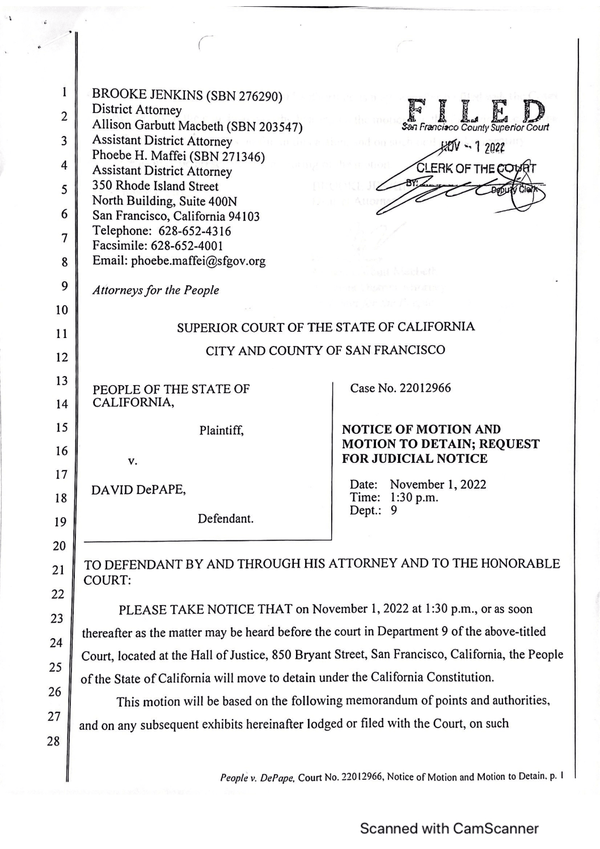 Read the document that reveals new details about the Pelosi attack

A filing by prosecutors in San Francisco revealed new details about the break-in at Speaker Nancy Pelosi’s home and the attack on her husband.

Mr. DePape, 42, was charged by federal prosecutors with attempting to kidnap Ms. Pelosi and assaulting a relative of a federal official.

State prosecutors have also charged Mr. DePape with six felonies: attempted murder, residential burglary, elder abuse, assault with a deadly weapon, false imprisonment of an elder and threatening family members of public officials. Mr. DePape pleaded not guilty on Tuesday to the state charges in a brief appearance in a San Francisco courtroom.

If convicted of the federal charges, Mr. DePape faces a maximum of 20 years in prison for the attempted kidnapping of a federal official in the performance of official duties, and up to 30 years for assaulting an immediate member of a federal official’s family and inflicting a serious injury with a dangerous weapon.

The suspect has been tied to extremist posts online.

Much remains unknown about Mr. DePape. But the authorities have been examining what appeared to be Mr. DePape’s copious online presence, which included angry rants and extremist views.

The domain of a blog written by a user who called himself “daviddepape” was registered to an address in Richmond, Calif., in August, and law enforcement determined that Mr. DePape had lived there for about two years, according to the federal complaint. From August until the day before the attack on Mr. Pelosi, the blog featured many antisemitic sentiments as well as concerns about pedophilia, anti-white racism and “elite” control of the internet.

One of the blog posts suggested that there had been no mass gassing of prisoners at Auschwitz, and others were accompanied by malicious and stereotypical images. Another reposted a video lecture defending Adolf Hitler.

Explaining why he didn’t flee the scene after he realized Mr. Pelosi had surreptitiously dialed 911, Mr. DePape compared himself to the founding fathers battling the British, saying “he was fighting against tyranny without the option of surrender,” according to the federal complaint.

The local court filing quoted Mr. DePape as having told officers at the scene that he was sick of the “lies coming out of Washington, D.C.,” and that he “came to have a little chat” with Ms. Pelosi.

The attack itself has become the subject of unfounded conspiracy theories.

In the aftermath of the attack, Republicans and other conservative voices spread lies, misinformation and baseless conspiracy theories about the assault, ominously suggesting that the media was withholding sordid facts about the case.

Elon Musk, the billionaire who completed his takeover of Twitter last week, posted a link to a discredited newspaper known for publishing falsehoods and claimed that “there might be more to this story than meets the eye.” The publication, offering no evidence, suggested the assailant was a male prostitute. Mr. Musk’s tweet was later deleted.

Some conservative media outlets framed the assault as a consequence of “soft on crime” policies of Democrats, a frequent attack line by Republicans around the country in the lead up to the midterm elections.

In comments that — deliberately or not — served to debunk some of the conspiracy theories, prosecutors said on Monday that Mr. Pelosi had never seen his attacker before.

How California’s Bullet Train Went Off the Rails