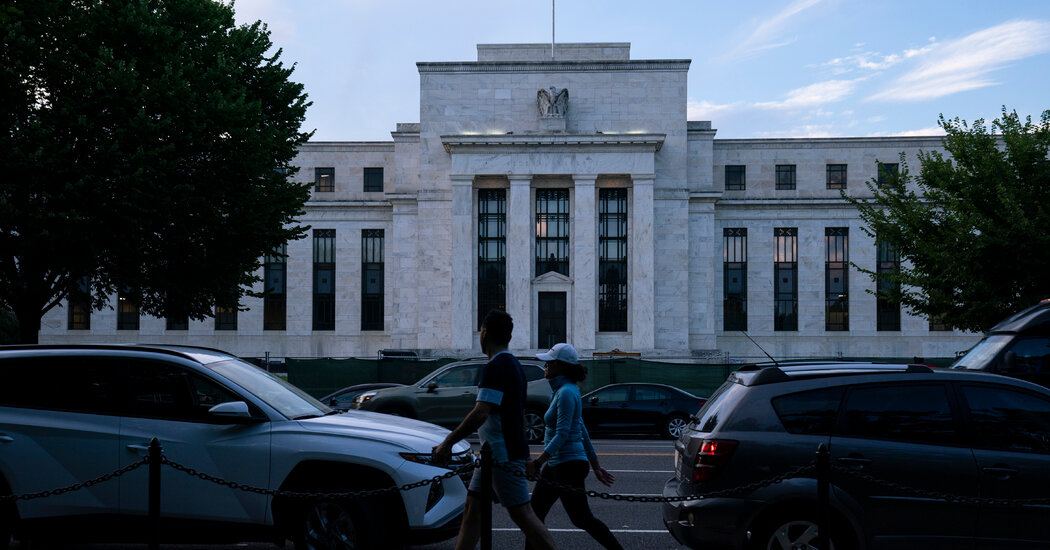 At the Federal Reserve’s meeting on Wednesday, alongside warnings of pain to come, policymakers sketched out a hopeful scenario in which they were able to reduce inflation gently, while the economy, albeit weakening, remained resilient.

Not everyone in the market agrees.

In particular, traders and analysts who follow the direction of interest rates closely said that they were bracing for a more dire outcome than the Fed had projected.

“The market thinks the Fed’s economic forecasts are an unrealistic fantasy,” said Mark Cabana, head of U.S. rates strategy at Bank of America.

Interest rate traders have been bruised this year as the Fed’s outlook for inflation and interest rates has repeatedly been upended by reality. The central bank this week raised interest rates by three-quarters of a percentage point — its third such increase since June. The Fed’s policy rate is now the highest it has been since 2008, well above forecasts at the start of the year. And policymakers predict it will move even higher as the central bank escalates its campaign to lower stubbornly high inflation.

After the Fed announced its decision, traders responded swiftly, adjusting prices across an array of interest rate markets like government bonds and futures to reflect the new higher path. But that is where the market’s alignment with the central bank ended.

Our Coverage of the Investment World

The decline of the stock and bond markets this year has been painful, and it remains difficult to predict what is in store for the future.

Instead, market prices are reflecting what many analysts expect to happen. Although the Fed doesn’t forecast lowering interest rates until 2024 at the earliest, analysts are betting that the central bank will have to do so next year. The belief is that the Fed’s aggressive rate increases will tip the American economy into a recession, slashing economic growth and dragging down inflation faster than the central bank predicts. That in turn is likely to force the Fed to shift its focus from fighting inflation and begin cutting interest rates by the end of next year to support an ailing economy.

Stocks plummeted on Friday, on course for a second straight week of losses, as investors yanked $4 billion out of funds that buy U.S. shares over a seven-day period ending Wednesday, according to EPFR Global, a data provider.

Higher interest rates increase costs for companies and consumers, typically weighing on stock prices. And the Fed wasn’t the only central bank to lift interest rates this week, with policymakers across Europe and Asia all moving in tandem.

“We will likely end up in a worse economic situation than the Fed is currently projecting,” said Kate Moore, a managing director at BlackRock.

In particular, analysts said that the Fed’s expectation of accelerating economic growth next year, rising to 1.2 percent from a forecast 0.2 percent for 2022, was incongruous with such dramatically higher interest rates. Analysts at Barclays noted the growth projection was “difficult to reconcile” with slowing spending and the “intensifying drag from tightening financial conditions.” As higher rates raise costs for companies, spending falls, hiring slows and unemployment rises.

Their worse economic outlook means analysts expect inflation to fall more quickly, with a recession cutting consumer and business demand faster than a more mild slowdown. That also paves the way for the Fed to cut interest rates to support the economy, something it has said it will only do once it is confident inflation is headed back to its target of two percent.

Futures prices currently forecast a rate of around 4.3 percent at the end of 2023, down from a peak of around 4.6 percent earlier in the year and implying a single quarter point cut in the back half of the year.

Yet not everyone agrees with what the market is pricing in. Goldman Sachs’s forecasts align closely with the Fed’s and the bank’s analysts predict interest rates will remain elevated throughout next year, with inflation proving difficult to contain. Lauren Goodwin, an economist at New York Life Investments, said that she also expected inflation to remain too far away from the Fed’s longstanding target of two percent for the central bank to consider cutting interest rates. Instead, Ms. Goodwin said, it is the market’s hope for lower rates that is “optimistic and I think too optimistic.”

Part of the challenge for the Fed is forecasting precisely how rate increases will impact the economy with so many other global forces at play. On top of the actions of other central banks, Russia’s ongoing war with Ukraine continues to have an impact on food and energy prices, even as the supply chain constraints that fueled inflation during the pandemic remain, and some emerging economies are on the verge of crises.

Members of the Fed committee that sets monetary policy have acknowledged such uncertainty. In their forecasts, they are asked to “indicate your judgment of the uncertainty attached to your projections relative to the levels of uncertainty over the past 20 years,” with the anonymous answers required to be a binary choice between higher or lower. All participants, across all forecasts — GDP, inflation and unemployment — responded “higher,” the first time that has happened since March 2020 and the onset of the coronavirus crisis.

“We don’t know — no one knows — whether this process will lead to a recession or if so how significant that recession would be,” said Jerome H. Powell, the Fed chair, on Wednesday.

For Mr. Cabana, such a high level of uncertainty, alongside such quick interest rate increases designed to choke the economy, is disconcerting.

“We just think the Fed has reflected that they are at maximum uncertainty about how the economy will evolve,” he said. “If you were to drive a car at 75 miles per hour with uncertainty over where the road is going then you have a pretty high chance of an accident.”