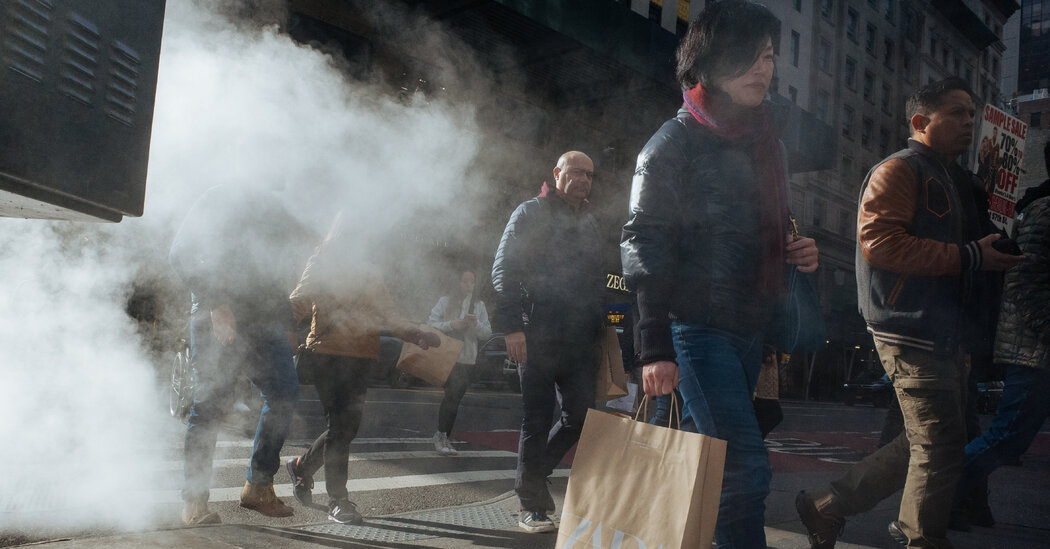 A measure of inflation that the Fed watches most closely is showing signs of moderation, though price gains still remain too fast for comfort.

Inflation showed signs of slowing but remained stubbornly rapid in October as a spate of economic data underscored that a return to normal price increases could take time.

Prices as measured by the Personal Consumption Expenditures index, the measure the Federal Reserve watches most closely, climbed by 6 percent in the year through October, the report showed, in line with what economists in a Bloomberg survey had expected. That was down from a 6.3 percent increase in the year through September.

A core price measure that strips out food and fuel costs, one that the Fed watches closely for a sign of what might come next with inflation, eased slightly to 5 percent. It has been hovering around that level throughout the year, so while the recent moderation is a step in the right direction, it is far from conclusive.

Other economic data provided fresh evidence of continued economic momentum. Consumer spending was accelerating, incomes were rising and jobless claims remained muted, reports on Thursday showed, suggesting that the economy remains resilient as workers benefit from plentiful jobs and use their savings to continue shopping. Sustained demand and a solid labor market could help to prevent an abrupt recession — but they could also help companies to continue raising prices, prolonging the journey back to normal inflation.

The Fed is closely watching how inflation evolves as it tries to determine how high to raise interest rates and how long to keep them elevated. Central bankers have raised borrowing costs to nearly 4 percent this year from near-zero in March, including a rapid series of three-quarter point moves. Jerome H. Powell, the Fed chair, signaled clearly on Wednesday that central bankers are poised to slow their rate increases in December. The question now is when, and at what level, they will stop raising borrowing costs.

Mr. Powell suggested that rates will probably need to climb slightly higher than the 4.6 percent peak that officials anticipated in September, when they last released economic forecasts. Investors now see rates peaking between 4.75 percent and 5 percent before coming down slightly late in 2023, based on market pricing.

“Ongoing increases will be appropriate,” Mr. Powell said this week. “We have a long way to go in restoring price stability.”

Thursday’s inflation data follow a more timely Consumer Price Index report, which showed price increases starting to moderate in October. The C.P.I. data are closely tracked because they come out more promptly and they feed into the Personal Consumption Expenditures data. But the Fed uses the P.C.E. figures as its official inflation target.

Central bankers aim for 2 percent annual inflation on average and over time, so the current pace of increase is still far faster than their goal. Given that so-called core inflation has been stuck around 5 percent all year, the Fed has been hesitant to make much of the recent cool-down in overall prices.

Many economists think that inflation will meaningfully decelerate in 2023, because market-based rent prices are now beginning to cool, supply chain problems have eased and consumers have been shifting their spending away from goods and toward services, which should help prices for physical products like couches and clothing to moderate.

“Forecasts have been predicting just such a decline for more than a year, while inflation has moved stubbornly sideways,” Mr. Powell said this week, adding later that “we’re going to have to be humble and skeptical about forecasts for some time.”

It is difficult to predict what will happen next with inflation in part because the economy, which had slowed meaningfully this year, seems to be resilient and possibly even re-accelerating in the face of higher prices and interest rates.

Consumption climbed 0.8 percent in October compared with the prior month, Thursday’s data showed, up from a previous gain of 0.6 percent. Adjusted for inflation, spending climbed by 0.5 percent.

More recent anecdotal data suggest that the holiday shopping season is off to a strong start: Retail sales over the Thanksgiving weekend were up 10.9 percent from the prior year, excluding cars and not adjusting for inflation, based on Mastercard data.

Understand Inflation and How It Affects You

Americans are being buoyed in part by a strong labor market that is helping them to take home more money, and by one-time payments from states, some of which have stimulus money left to disperse or are benefiting from strong tax receipts.

Personal income rose by 0.7 percent in October, and 0.4 percent after adjusting for inflation, Thursday’s data showed. That was the biggest inflation-adjusted increase since July.

At the same time, people seem to be growing more price sensitive as their savings run down and expensive food and gas weigh on family budgets. Stores have begun to discount products again to lure and retain customers, which could help to reduce inflation, if it is drastic enough.

Consumers could become even more sensitive next year if the policy moves the Fed has made in 2022 trickle through the economy and temper business expansions, hiring and pay gains, as many economists expect, and as households draw down the savings stockpiles they amassed over the course of the pandemic.

“We expect spending growth to slow, on the back of a material increase in the pace of layoffs and a slowdown in hiring,” Ian Shepherdson at Pantheon Macroeconomics wrote in a research note. “We think people will be less willing to run down savings in the face of a deteriorating labor market.”

Fed officials are watching both spending data and the employment situation as they try to guess what might come next with inflation. Wage growth has been strong in recent months, and it could be hard for inflation to moderate the whole way back to normal without slower pay growth.

That is because services prices — those for haircuts, manicures, vacations and the like — are heavily driven by pay gains. When companies are spending more on labor, they are likely to try to pass those higher costs on to consumers in the form of higher prices.

America will get a fresh look at how both the job market and the wage situation is shaping up on Friday, when the Labor Department is set to release November employment data.

Once Told to Move to the Back of the Bus, Jesse White Became an...