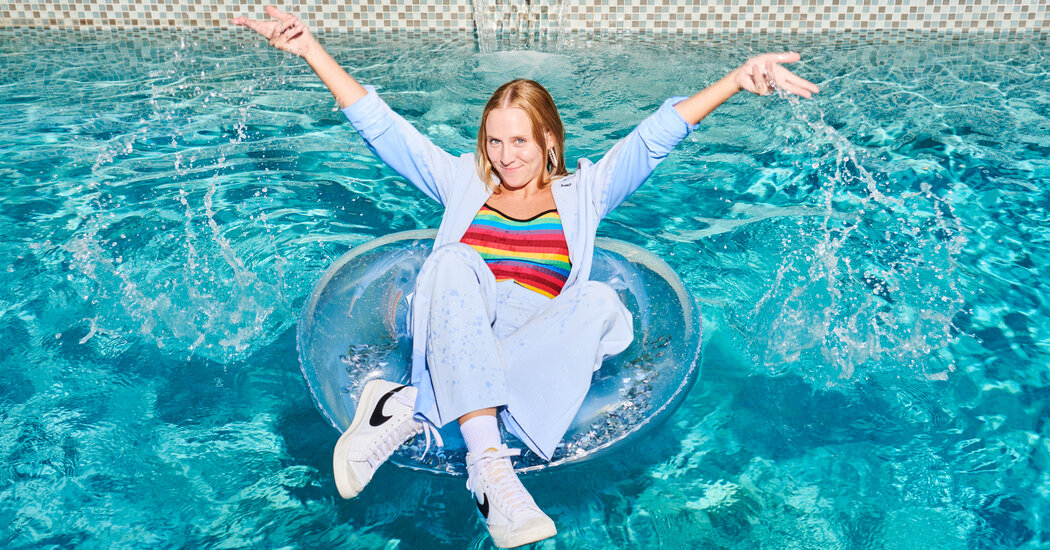 When relationship dramas heated up this summer, she saw an opportunity.

For a particular corner of the internet, the world ended this summer. Several internet-famous WLW couples — an abbreviation for “women-loving women” — had made online announcements that they had split up, leading their followers to speculate about a so-called breakup curse. Followers of the drama called it the “lesbian breakup apocalypse,” and NBC News reported on it in August.

For Kaelee Overfield, this mess was an opportunity.

Ms. Overfield, 25, has carved out a significant following for her videos breaking down the gay gossip and drama du jour over the last two years. She has more than 480,000 followers on TikTok, where she posts under the handle @Kales_0. Think of her as TMZ but exclusively for queer internet news. A niche market, sure, but one she has arguably conquered, though not without detractors, who criticize her for invading people’s privacy, among other things.

Her account is in the style of a YouTube tea channel, a content genre where creators meticulously document celebrity scandals and sagas. Colloquially, this gossip is known as tea, a term with roots in the Black drag community. Such accounts have also become popular on TikTok.

Ms. Overfield, who is a lesbian, started posting on TikTok in early 2020 as a senior in college. Initially she would post what she described as “relatable lesbian content,” she said in a phone interview from Florida, like a re-enactment of a friend meeting her girlfriend’s parents for the first time. The meeting did not go well, she said, but the TikTok was well received and she began building a following.

Her breakthrough moment was something of a coincidence. Ms. Overfield bears a striking resemblance to an ex-girlfriend of the entertainer Jojo Siwa, some TikTok users say, and in June 2021, Ms. Overfield nodded to the resemblance in a comedic TikTok video that would later be duetted by Ms. Siwa. (On TikTok, the duet feature allows a user to post another video side by side to an existing TikTok video.)

@itsjojosiwa #duet with @kales_0 ♬ This is my family – STEEERLING

That video has been viewed more than 43 million times.

Ms. Overfield estimated she gained 40,000 TikTok followers from the interaction, many of whom were primed as she began posting regular updates about Ms. Siwa’s relationships in the subsequent months.

Since then, Ms. Overfield has devoted hours to chronicling the relationships, breakups and various connections between nonbinary and WLW celebrities big and small.

“People like when things are concise and put together for them,” said Ms. Overfield, who is a third-year law student at Stetson University College of Law in Gulfport, Fla. “Sometimes I sit in the parking lot of school and nail out a video at like 7:30 in the morning,” Ms. Overfield said. “Like, ‘If I can’t nail this scene in one more take, it’s not going to happen.’”(Ms. Overfield lives in Tampa but said she had evacuated out of the Hurricane Ian flood zone as of Wednesday morning.)

A large part of Ms. Overfield’s methodology relies on observing internet metrics: likes, follows, shares and, critically, the sudden absence of all the above. That absence was how Ms. Overfield justified posting TikTok videos theorizing Ms. Siwa had broken up with her girlfriend in 2021, before Ms. Siwa had confirmed it publicly.

“I view it kind of like when you’re in high school and you go on Instagram or, even now, being an adult and you see that, you know, ‘Person A’ has deleted all the pictures of her boyfriend, you assume they broke up,” Ms. Overfield said. “Then you go to work and you tell everybody, ‘they broke up.’ All I’m doing is just telling millions of people, because Jojo Siwa has millions of people who care.”

Ms. Overfield said she received death threats after posting about Ms. Siwa’s breakup before it was public. “I think these fans are so quick to accuse someone like me of spreading false rumors for clout,” she said. “They’re also partly devastated that if what I am saying is true, that they’re going to lose part of this entertainment that they have grown to love and think of as part of their lives.”

She acknowledged that she herself wants clout. “Anybody posting on TikTok is doing anything they’re doing for clout,” Ms. Overfield said. “There’s no other reason to be posting on an app that, you know, you primarily use to generate a following.”

She said she has been paid for her content through TikTok’s Creator Fund. The fund is a pool of money TikTok uses to compensate some creators who meet certain criteria, like having 100,000 views over the last 30 days. Ms. Overfield estimated that her highest monthly payment was $500 and said the sums are often smaller.

Like traditional tabloids, Ms. Overfield is open to tips and regularly receives messages both from devoted followers and the very subjects of her videos. Chrishell Stause of “Selling Sunset” is a fan, seeking out Ms. Overfield on Instagram to compliment her “C.I.A. skills” in a message reviewed by The Times. Ms. Stause said in the message that she and her partner, the musician G Flip, enjoy watching Ms. Overfield’s TikTok videos.

For all Ms. Overfield’s many fans, the comments sections of her TikTok videos often have critics. In some of her videos, Ms. Overfield speculates about the sexual orientations of celebrities. “We literally cancelled Perez Hilton for that,” one TikTok user wrote in a comment on a recent video. (Mr. Hilton, an early gossip blogger and media personality, was permanently banned from the app in 2020 for violating community guidelines.)

Ms. Overfield was recently accused of antisemitism by some users after using an audio clip in a TikTok video that referred to Anne Frank. The clip was originally from the show “Dance Moms” and had been reposted to TikTok, where many users thought it made light of Frank. Ms. Overfield said she does not plan to apologize, but has since deleted the video.

If a subject wants Ms. Overfield to stop posting about them, she’ll consider it, she said. Ms. Overfield said she had received such a message from Avery Cyrus, who has a large following on TikTok. Ms. Overfield said that Ms. Cyrus asked her to not make a video about a particular moment in her breakup with another TikToker, Soph Mosca, because the couple had decided to stop publicizing it. (Ms. Mosca and Ms. Cyrus declined to comment for this article.)

“Whenever I get a message like that, I’m like, ‘absolutely no problem,’ because I know the next day someone’s going to break that promise and post something. And I feel like when that happens, I’m back to my free rein,” Ms. Overfield said. “I’ll stop if you guys are going to stop. But if you’re going to feed the internet and give it views of your breakup, like, why can’t I use it too?”

When it comes to views, capitalizing on WLW drama seems to be an effective strategy. Kendall Payne, 28, a comedian in Brooklyn, has a popular series on TikTok where she stands in front of a white board and gives pseudo-lessons on the latest developments. “It’s like being in college but your professors are highly educated TikTok lesbians and the only course you can take is ‘drama,’” King Princess, a gay musician, wrote in a duet of one of the videos.

On Instagram, the writer and comedian Liza Dye runs the account @BettePorterGallery. (The name is a reference to the character played by Jennifer Beals on “The L Word.”) “You know that account Deuxmoi?” Ms. Dye said, referring to a popular anonymous Instagram account. “People compare me to them a lot. They say I’m a lesbian Deuxmoi.”

She hopes, by regularly posting about queer relationships, “to combat the whole, like, gal pal label that they try to slap on queer women in mainstream media,” Ms. Dye, 33, said.

Connecting with people is Ms. Overfield’s favorite part of her TikTok.

“I have a lot of younger kids DM me, too. Like they’re in high school. They have one gay friend, and them and their one gay friend, if they even have one, are so stoked to talk about this,” Ms. Overfield said. “I think a bigger part of my platform is creating a space for people to interact with each other in the comments about this kind of stuff and giving people a community.”

Ms. Overfield, who wants to be a prosecutor, plans to take the bar exam this summer. She is unsure what she will do with the account in the future but isn’t planning to abandon her legal ambitions for a full-time career in tea.

“I’m going to eventually have to retire as Lesbian Tea-sus,” she said.