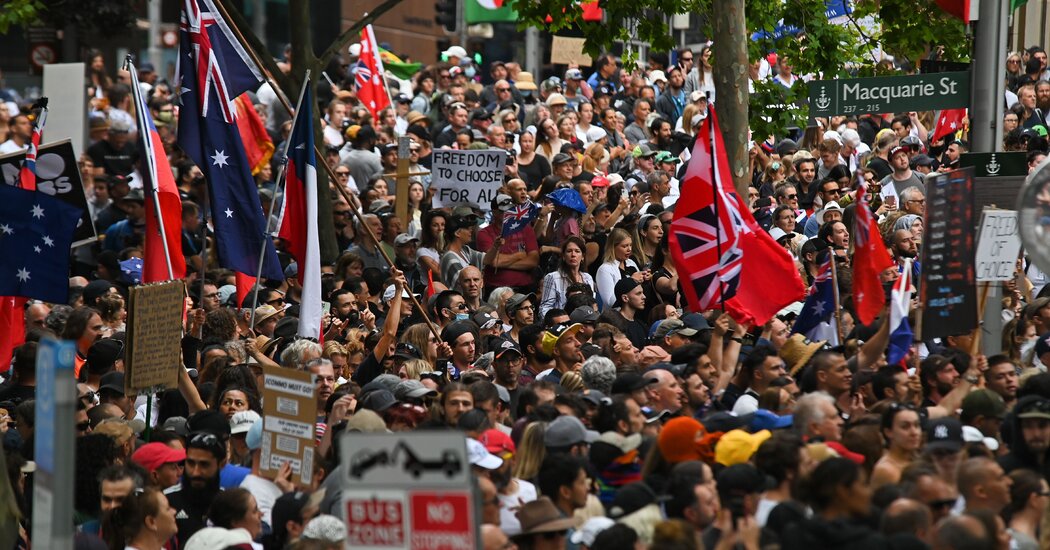 Almost all of Australia and New Zealand’s pandemic restrictions have been lifted. Yet the protests continue.

“Two shots, three shots, four shots, five — how many shots will you survive?”

Every Saturday afternoon, protesters collect outside Parliament House in Melbourne, then stream down through the city center toward the waterfront.

In November, when I moved to the city, those protesters were a tsunami of frustration and anger. They closed off streets and disrupted public transportation, the chants of thousands echoing off the glass-and-stone skyscrapers. These days, the protests are more of a trickle — a few hundred people most weeks, railing against scientific consensus, Covid-19 vaccines and restrictions, the media and the government, among other institutions.

Around a year ago, Australia and New Zealand imposed strict vaccine mandates that affected where unvaccinated people could eat, drink and shop; how they could gather to socialize and worship; and what jobs they could hold. These days, with the exception of some mask requirements and vaccine mandates for certain health and education workers, almost all of these restrictions have been lifted. Yet the protests continue.

In New Zealand this week, about 2,000 people gathered outside Parliament in Wellington. Though some were there to protest the Covid-19 restrictions still in place, others held signs against the “U.N. agenda,” the World Economic Forum and “socialist dictators,” as well as banners that called for an end to the government. In a mock trial featuring a fake judge, the New Zealand government was eventually found guilty by the protesters for “crimes against humanity.”

Rhetoric of this sort was already present in New Zealand before the pandemic, said Kate Hannah, the director of The Disinformation Project, an independent research group studying misinformation and disinformation in New Zealand. But something shifted in the lockdown that began last August, in which roughly a third of New Zealanders were largely confined to their homes for months on end, she said.

“That long lockdown seemed to change people’s circadian rhythms of engagement with information more broadly, but also with misinformation and disinformation; people were consuming more, for longer periods,” Ms. Hannah said. “And it was coming from that space of U.S.-based conspiratorial ideas around masks, around lockdowns, framed within the context of a global conspiracy.”

People who might have been looking to learn more about Covid-19 found themselves pulled toward other kinds of disinformation, she said. “Minimization of Covid-19 has been like a Trojan horse,” Ms. Hannah said. “It has become a really significant recruitment tool and then has created an ability to coalesce around a set of ideas that are anti the state.”

Many of these ideas originate in North America, but they have taken on a new form in New Zealand. Questions of Indigenous rights have filtered into a homegrown iteration of the sovereign citizen movement, in which people believe themselves to be answerable only to their own interpretations of so-called common law, rather than government statutes or proceedings.

And aspects of the QAnon conspiracy theories, which rotate around the false notion of a cabal of satanic pedophiles, appear to have new resonance to some amid a continuing inquiry into abuses of children in state care.

The number of people captivated by these ideas is small, but they are a potentially powerful force that seeks greater political representation, especially in New Zealand, where a new alliance of fringe political parties announced at this week’s protest in Wellington is currently polling at 1 percent. Garnering 5 percent of the vote in next year’s election would get it a single seat in Parliament.

Right-wing populist parties underperformed in Australia’s federal election earlier this year. But in the upcoming state elections in the state of Victoria, where residents endured months of lockdown, the effects of Covid-19 restrictions may yet make themselves felt, with anti-restriction microparties — such as the Angry Victorians Party and the Restore Democracy Sack Dan Andrews Party — hoping to appear on the ballot.

Here are this week’s stories.

Are you enjoying our Australia bureau dispatches?Tell us what you think at [email protected].

Like this email?Forward it to your friends (they could use a little fresh perspective, right?) and let them know they can sign up here.