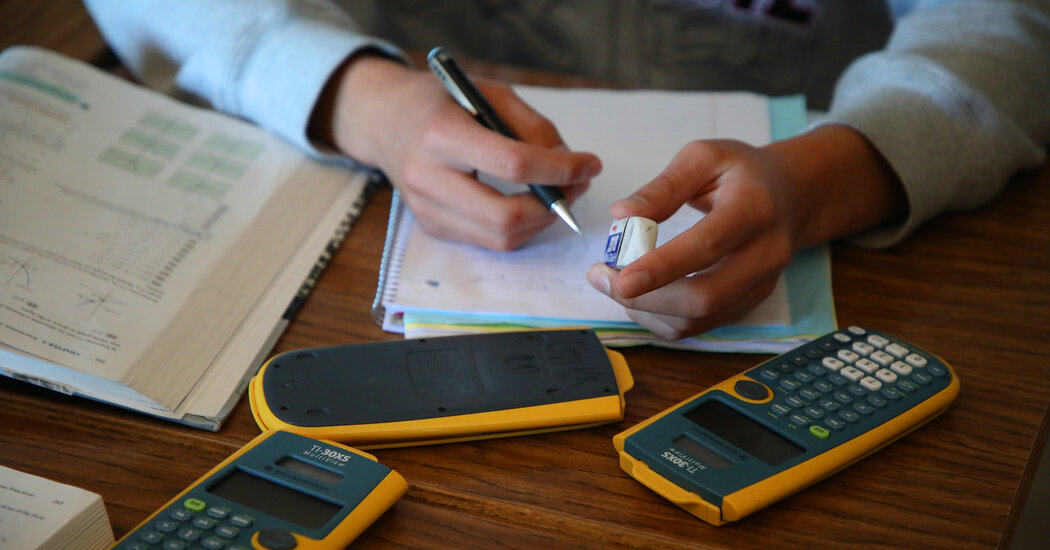 The results of a national test showed just how devastating the last two years have been for 9-year-old schoolchildren, especially the most vulnerable.

National test results released on Thursday showed in stark terms the pandemic’s devastating effects on American schoolchildren, with the performance of 9-year-olds in math and reading dropping to the levels from two decades ago.

This year, for the first time since the National Assessment of Educational Progress tests began tracking student achievement in the 1970s, 9-year-olds lost ground in math, and scores in reading fell by the largest margin in more than 30 years.

The declines spanned almost all races and income levels and were markedly worse for the lowest-performing students. While top performers in the 90th percentile showed a modest drop — three points in math — students in the bottom 10th percentile dropped by 12 points in math, four times the impact.

“I was taken aback by the scope and the magnitude of the decline,” said Peggy G. Carr, commissioner of the National Center for Education Statistics, the federal agency that administered the exam earlier this year. The tests were given to a national sample of 14,800 9-year-olds and were compared with the results of tests taken by the same age group in early 2020, just before the pandemic took hold in the United States.

High and low performers had been diverging even before the pandemic, but now, “the students at the bottom are dropping faster,” Dr. Carr said.

In math, Black students lost 13 points, compared with five points among white students, widening the gap between the two groups. Research has documented the profound effect school closures had on low-income students and on Black and Hispanic students, in part because their schools were more likely to continue remote learning for longer periods of time.

The declines in test scores mean that while many 9-year-olds can demonstrate partial understanding of what they are reading, fewer can infer a character’s feelings from what they have read. In math, students may know simple arithmetic facts, but fewer can add fractions with common denominators.

The setbacks could have powerful consequences for a generation of children who must move beyond basics in elementary school to thrive later on.

“Student test scores, even starting in first, second and third grade, are really quite predictive of their success later in school, and their educational trajectories overall,” said Susanna Loeb, the director of the Annenberg Institute at Brown University, which focuses on education inequality.

“The biggest reason to be concerned is the lower achievement of the lower-achieving kids,” she added. Being so far behind, she said, could lead to disengagement in school, making it less likely that they graduate from high school or attend college.

The National Assessment of Educational Progress is considered a gold standard in testing. Unlike state tests, it is standardized across the country, has remained consistent over time and makes no attempt to hold individual schools accountable for results, which experts believe makes it more reliable.

The test results offered a snapshot for just one age group: 9-year-olds, who are typically in third or fourth grade. (More results, for fourth graders and for eighth graders, will be released later this fall on a state-by-state level.)

“This is a test that can unabashedly speak to federal and state leaders in a cleareyed way about how much work we have to do,” said Andrew Ho, a professor of education at Harvard and an expert on education testing who previously served on the board that oversees the exam.

Over time, scores in reading, and especially math, have generally trended upward or held steady since the test was first administered in the early 1970s. That included a period of strong progress from the late 1990s to the mid-2000s.

But over the last decade or so, student scores had leveled off rather than gained, while gaps widened between low- and high-performing students.

Then came the pandemic, which shuttered schools across the country almost overnight. Teachers taught lessons over Zoom, and students sat at home, struggling to learn online.

In some parts of the country, the worst of the disruptions were short lived, with schools reopening that fall. But in other areas, particularly in big cities with large populations of low-income students and students of color, schools remained closed for many months, and some did not fully reopen until last year.

The national tests, Dr. Ho said, tell the story of a “decade of progress,” followed by a “decade of inequality” and then the “shock” of the pandemic, which came with a one-two punch.

“It erased the progress, and it exacerbated the inequality,” Dr. Ho said. “Now we have our work cut out for us.”

He estimated that losing one point on the national exam roughly translated to about three weeks of learning. That means a top-performing student who lost three points in math could catch up in as little as nine weeks, while a low-performing student who lost 12 points would need 36 weeks, or almost nine months, to make up ground — and would still be significantly behind more advanced peers.

There are indications that students — fully back in school — have begun to learn at a normal pace once again, but experts say it will take more than the typical school day to make up gaps created by the pandemic.

The results should be a “rallying cry” to focus on getting students back on track, said Janice K. Jackson, who led the Chicago Public Schools until last year and is now a board member of Chiefs for Change, which represents state education and school district leaders. She called for the federal government to step up with big ideas, invoking the Marshall Plan, the American initiative to help rebuild Europe after World War II.

“That is how dramatic it is to me,” she said, adding that politicians, school leaders, teachers’ unions and parents would have to set aside the many disagreements that flared during the pandemic and come together to help students recover.

“No more of the arguments, and the back and forth and the vitriol and the finger pointing,” she said. “Everybody should be treating this like the crisis that it is.”

But solutions may be rather basic, if difficult to carry out. Martin West, a professor at the Harvard Graduate School of Education and a member of the National Assessment Governing Board that oversees the test, said that low-performing students simply needed to spend more time learning, whether it was in the form of tutoring, extended school days or summer school.

The federal government has budgeted $122 billion to help students recover, the largest single investment in American schools, and at least 20 percent of that money must be spent on academic catch-up. Yet some schools have had difficulty hiring teachers, let alone tutors, and others may need to spend far more than 20 percent of their money to close big gaps.

Will quit if Centre brings law allowing only one member of family in politics:...