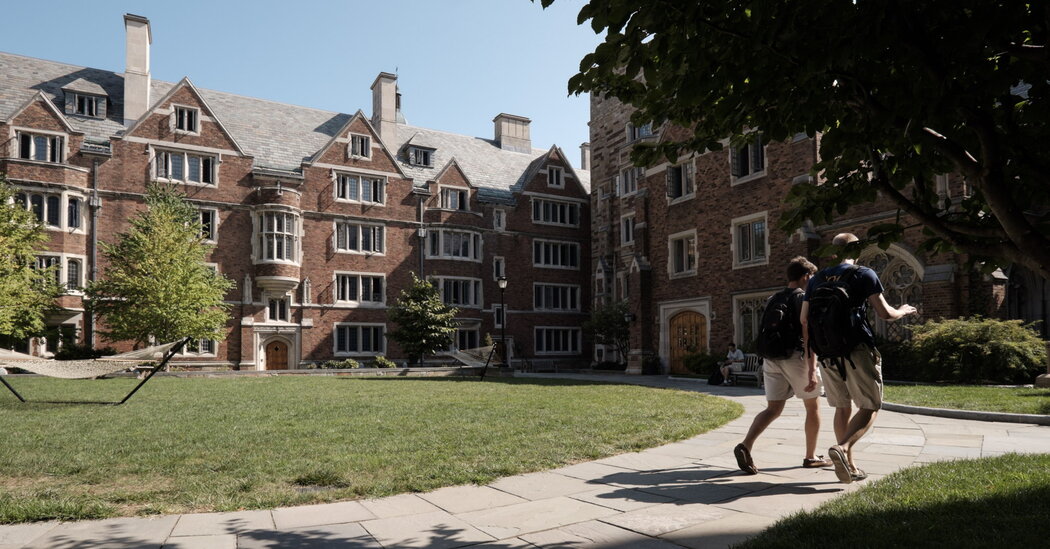 Most elite colleges, like Yale and Harvard, give a boost to applicants who are children of alumni. But with affirmative action under attack, that may become harder to defend.

Describing its incoming class of 2025, Yale boasted that its students hailed from 48 states, 68 countries and 1,221 high schools. What’s more, the university announced last year, 51 percent of the class identified as students of color.

Yet even as Yale promotes the diversity of its first-year students, the college has clung to an admissions tradition — legacy preferences — that mostly benefits students who are white, wealthy and well-connected. Of the incoming students, 14 percent were the offspring of a Yale graduate, receiving the kind of admissions boost also used at other elite institutions.

Not much has made a dent in the century-old tradition, despite efforts to end the preference that have been waged by progressive students, lawmakers and education reformers. Many colleges say legacy students cement family ties and multigenerational loyalty. And only a few elite colleges have abolished the preference.

The practice of legacy admissions, however, may soon face its greatest test yet — and in a twist, its future could be tied to the future of affirmative action.

The Supreme Court is expected to hear arguments this fall about race-conscious admissions policies at Harvard and the University of North Carolina. If the court ends or rolls back the widely used practice of considering race in selecting students, as many experts expect, the ruling could prompt a reconsideration of legacy applicants. Explicitly favoring the children of alumni — some of whom would be competitive applicants regardless because of socioeconomic advantages — would become harder to defend if racial preferences are no longer allowed.

The University of California system, the University of Georgia and Texas A&M all ended legacy preferences when they were pressured by lawsuits and ballot initiatives to stop using affirmative action, according to a Century Foundation analysis.

Students for Fair Admissions, the conservative group that filed the Supreme Court cases against Harvard and North Carolina — and also sued Yale — has argued that eliminating legacy preferences is one way to help achieve racial diversity without using affirmative action, which the organization says is discriminatory. One member of the court, Justice Clarence Thomas, has openly opposed affirmative action and signaled his belief that legacy preferences and other factors poison the admissions process.

That context puts universities in a decidedly awkward position when it comes to defending legacy admissions. The topic is so sensitive that few officials at selective colleges with legacy preferences would discuss them.

The use of legacy admissions dates back to the 1920s, when elite colleges, traditionally the domain of wealthy Protestants, became concerned that spots were being taken by Jews and Catholics.

The exact number of schools that use legacy preferences is unknown, but a survey by Inside Higher Ed in 2018 found that 42 percent of private schools — including most of the nation’s elite institutions — and 6 percent of public schools used the strategy. Only a handful of elite colleges — including Johns Hopkins and Amherst — have abandoned the preference in recent years.

Many college officials have argued that legacy preferences are only a small part of the selection process. But on a practical level, they help colleges manage their enrollment rates and predict their tuition revenue. Students who are legacies, as children of alumni are known, are more likely to attend if admitted, increasing a factor known as “yield” in the industry.

A momentous term. The U.S. Supreme Court issued several major decisions during its latest term, including rulings on abortion, guns and religion. Here’s a look at some of the key cases:

Abortion rights. In Dobbs v. Jackson Women’s Health Organization, the court ruled that a Mississippi law that bans most abortions after 15 weeks is constitutional and overturned the constitutional right to abortion established by Roe v. Wade in 1973.

Climate change. In West Virginia v. Environmental Protection Agency, the court ruled against the E.P.A., limiting its ability to regulate carbon emissions from power plants and making it much tougher for President Biden to achieve his climate goals.

School prayer. In Kennedy v. Bremerton School District, the court ruled that a Washington football coach at a public high school had a constitutional right to pray at the 50-yard line after his team’s games.

Separation of church and state. In Carson v. Makin, the court ruled that a Maine program that excludes religious schools from a state tuition program is a violation of the free exercise of religion.

Immigration. In Biden v. Texas, the court ruled that the Biden administration may rescind the Trump-era “Remain in Mexico” program, which forces certain asylum seekers arriving at the southwestern border to await approval in Mexico.

Donations are also a factor. “I think that a lot of elite and exclusive schools feel that they have to use the legacy preferences piece as a fund-raising mechanism from alumni,” said Andrew Gounardes, a state senator from Brooklyn, who recently sponsored a bill that would have banned legacy preferences in New York.

His bill was opposed by the state’s private school association, the Commission on Independent Colleges and Universities, which includes highly selective colleges such as Columbia, Cornell and Colgate.

In Connecticut, where lawmakers held a hearing on the issue in February, Yale was among the private schools that came out in opposition. In written testimony, Jeremiah Quinlan, Yale’s dean of undergraduate admissions, called the proposed ban a government intrusion into university affairs.

“The process for selecting students for admission, together with the processes for hiring faculty and deciding which courses to offer, defines a campus community and culture,” he wrote.

Peter Arcidiacono, a Duke economist who analyzed Harvard data that was released in the Students for Fair Admissions case, found that a typical white legacy applicant would have a fivefold increase in likelihood that he or she would be admitted.

His analysis also found that over the years, legacy applicants were receiving a greater advantage. While the share of admitted students who are legacies or athletes has remained stable, there has been little growth in the number of applicants who fit into those categories. At the same time, applications at Harvard and other elite colleges have increased sharply.

Even if legacy preferences were eliminated at Harvard, the study said, that would not offset the loss in diversity if race-conscious admissions were also eliminated.

Harvard declined to release figures on its legacy admissions, but a Harvard Crimson survey of incoming students reported that legacies made up about 15.5 percent of last year’s freshman class. Dr. Arcidiacono’s analysis, covering several years, found a 14 percent legacy admission rate at Harvard.

For the most part, the exact impact of legacy admissions on campus is a black box. “Universities hide their data,” said Dr. Arcidiacono, who was hired as an expert witness by Students for Fair Admissions.

The New York Times tried to interview more than 20 presidents and admissions directors at selective schools that use legacy preferences, but a large majority of them were not made available for interviews, including Yale’s president, Peter Salovey, and Harvard’s president, Lawrence S. Bacow.

Several other university leaders have publicly defended the system, saying it builds loyalty and a special bond.

“We’re an institution that was made in a family — the Duke family,” Vincent Price, the president of Duke, said in an address to faculty. He added, “The idea that you would ban legacy preferences, or ban any particular factor as a consideration, is troublesome.” A survey this year by The Chronicle, a student newspaper, found that about 22 percent of first-year students had parents or siblings who attended Duke.

Dr. Price was not made available for an interview. Neither was Martha Pollack, the president of Cornell.

In an interview with the campus newspaper in 2018, Dr. Pollack said, “We’re trying to create a Cornell family that goes on for generations.” Cornell would not release its legacy figures.

College officials who did agree to speak with The Times generally downplayed the importance of a legacy preference in their admissions process — and emphasized that some Black alumni supported the practice.

Black college graduation soared in the United States following the civil rights movement, quadrupling from 1970 to 2010. The children of many of those Black graduates are ready to head off to college.

The University of Virginia, a highly selective public flagship school that began admitting Black students in the 1950s, sometimes gives extra consideration to legacies, who made up about 14 percent of last year’s freshmen and transfer students, according to Steve Farmer, the vice provost for enrollment.

In an interview, Mr. Farmer said the topic came up during a meeting of Black alumni this year. “I was talking with people one by one, and three of the first five questions had to do with legacy admissions for students of color,” Mr. Farmer said.

“We have tons of friends whose kids are starting school,” said Sanford S. Williams, a lecturer at U.C.L.A. School of Law and an active Black alumnus of the University of Virginia. “They think, ‘Why it is every time we get a chance to do something, the rug is pulled out from under us?’”

Mr. Williams and his wife, a doctor, both have Virginia degrees, as do their three children. And he supports legacy preferences, as long as they are a small part of the admissions process.

Logan Roberts, a white student from Groton, N.Y., leads an organization of first-generation college students at Yale, where he said the class divide came into sharp focus following the national Varsity Blues scandal, in which parents were caught trying to bribe their children’s way into elite colleges, including Yale.

Mr. Roberts, a rising senior, drafted a resolution opposing legacy preferences that was adopted in October by the Yale College Council Senate.

“Students who already have a leg up don’t need another leg up,” he said.